Schwerin diocese before the Reformation 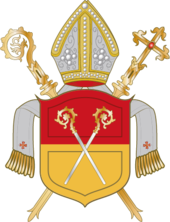 Coat of arms of the diocese of Schwerin

The diocese of Schwerin (1062/1158 to 1557/1648) was a Roman Catholic diocese . At the time of the division of Germany, this area was ecclesiastically under a special position, most recently as the episcopal office of Schwerin . The area had been part of the Osnabrück diocese since 1930 and, since 1994, has belonged to the Hamburg archdiocese .

Furthermore, the bishopric of Schwerin, ruled by the Schwerin bishops, was a spiritual territory of the Holy Roman Empire in what is now the state of Mecklenburg-Western Pomerania . As a result of the Peace of Westphalia , the territory passed into the secular principality of Schwerin in 1648 .

Archbishop Adalbert von Bremen separated the dioceses of Mecklenburg and Ratzeburg from the diocese of Oldenburg / Holstein (later moved to Lübeck ) around 1062 . But already in 1066 its foundations fell victim to a bloody revolt of the Wends , which abbot Ansverus of St. Georg in Ratzeburg and his followers in the neighboring diocese of Ratzeburg stoned.

Archbishop Hartwig I of Bremen wanted to reoccupy the vacant bishoprics in 1149, but came into conflict with the sovereign, the Guelph Duke Heinrich the Lion . Only this was able to give the dioceses the necessary economic basis and therefore claimed the right to appoint the bishops ( investiture ) in his dominion. The dispute was decided in 1154 at the Reichstag in Goslar: King Friedrich I Barbarossa transferred his royal right to invest in the northern Albing dioceses to his cousin Heinrich the Lion. In 1158 he appointed the monk Berno of the Cistercian monastery Amelungsborn as bishop of Mecklenburg.

Schwerin Cathedral before the neo-Gothic tower was built

In 1160 the bishopric was moved from Mecklenburg to Schwerin . Associated with this was the renaming of the diocese after the newly founded German city of Schwerin, while Bishop Berno continued to use his seal, which referred to him as Bishop of Mecklenburg. In the same year, Archbishop Hartwig, with the consent of Heinrich the Lion, placed the Schwerin diocese under the metropolitan authority of the Hamburg Church . On the initiative of Bishop Bernos , the oldest Cistercian monasteries in Mecklenburg, Doberan (1171) and Dargun (1172), were founded as colonization monasteries. The first cathedral in Schwerin was consecrated as early as 1171. Around 1180 Bützow became the episcopal residence under Bishop Berno. From 1239 Bützow was the main residence of the bishops of Schwerin.

Reformation and the meantime

The Reformation was introduced in Mecklenburg from 1533. The Catholic cult was also eliminated in the bishopric . This process was completed in 1557.

In 1625 the then only two-year-old son of the Duke of Mecklenburg, Christian , was elected the last administrator ( coadjutor ). In the course of the restoration of orderly conditions in the monastery area by Sweden, which had occupied the country in 1631, the monastery government was handed over to his father, Duke Adolf Friedrich I of Mecklenburg , by martial law . He was the last administrator. In the Peace of Westphalia , the monastery area was awarded to Duke Adolf Friedrich I as a hereditary, secular principality.

On the part of the Roman Catholic Church, the area of ​​the diocese, together with the parts of the former dioceses of Ratzeburg and Kammin, which also extended to the area of ​​Mecklenburg, as well as large parts of northern Germany and Scandinavia, as the Apostolic Vicariate of the North, were directly subordinated to the Congregatio de Propaganda Fide in Rome, which was founded in 1622 . The areas were merged in 1667 in the Vicariate Apostolic of the Nordic Missions . In the course of time, independent jurisdictions were created for many sub-areas . For the remaining territories, the Apostolic Vicariate of Northern Germany was formed in 1868. It included the two grand duchies of Mecklenburg as well as the free city of Lübeck and the rule of Eutin of the grand duchy of Oldenburg . In 1930 this area came to the Diocese of Osnabrück .

The way to the Apostolic Administration Schwerin

After the Second World War , under the conditions of the division of Germany , the responsible Bishop of Osnabrück, Hermann Wilhelm Berning , founded the Episcopal Commissariat Schwerin on April 16, 1946 and appointed the pastor of Schwerin, Bernhard Schräder , as Episcopal Commissioner . In 1958 he was first appointed vicar general of the Bishop of Osnabrück for Mecklenburg and in 1959 then also auxiliary bishop .

In 1970, the Berlin auxiliary bishop Heinrich Theissing was appointed adjutor bishop to Schwerin and, in 1971, took over the duties of the episcopal commissioner for Mecklenburg as his successor.

Incorporation into the Archdiocese of Hamburg

With the establishment of the Archdiocese of Hamburg on October 24, 1994, the Schwerin jurisdiction was integrated into the Archdiocese of Hamburg, but was still the seat of the auxiliary bishop as episcopal vicar for Mecklenburg with the seat in the parish until the age-related resignation of Norbert Werbs on May 20, 2015 Provost church of St. Anna . In Schwerin there is an archbishop's office as a branch of the Hamburg Ordinariate. The administration building was built in 1978 together with the St. Martin branch church in the Lankow district . The theologian Claudia Schophuis has been the head of the Archbishopric Office and the Commissariat of the Archbishops of Hamburg and Berlin in the state of Mecklenburg-Western Pomerania since November 2013. 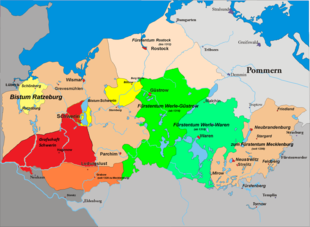 The Schwerin Monastery (yellow) and its neighboring territories around 1300

In 1171 Heinrich the Lion equipped the diocese economically, with the center of the property in the area of Bützow and Ilow . On September 9, 1171, the Schwerin diocese included the castles Mecklenburg , Schwerin, Kutin (near Plau am See ) and Kessin with all the associated localities. as well as the castles Parchim and Malchow with the surrounding area.

After the fall of Henry the Lion in 1180, the right to invest was first claimed by the Ascanians and then by the Danish King Waldemar II . In the middle of the 13th century, however, the Schwerin diocese was able to secure its direct imperial position and also consolidate jurisdiction and sovereignty for the monastery area. In this way a small territorial rule was established, but its economic basis was very narrow.

In 1239 the bishops took their seat in Bützow. The church there is therefore a collegiate church . Conflicts with the Mecklenburg princes as well as an extensive alliance policy and involvement in the Nordic battles for the throne strained the economic resources of the diocese. In the 14th and 15th centuries, the debt increased sharply and resulted in extensive pledges of land. In the 15th century, the diocese became dependent on the Mecklenburg dukes.

Even after the introduction of the Reformation , the bishopric remained as a dominion (with Protestant bishops from the House of Mecklenburg ). The imperial immediacy was confirmed by the imperial chamber court in 1561. In 1628 it came to Wallenstein as a fief , but in 1630 he had to vacate his Duchy of Mecklenburg and the Principality of Schwerin due to the Swedish intervention in the Thirty Years War , before he fell out of favor with the Emperor and was murdered in 1633/34. After the chaos of war, the Peace of Westphalia in 1648 confirmed the restitution to the dukes of Mecklenburg and the territory was renamed the secular principality of Schwerin .

A bishopric crest is first detectable under Bishop Albrecht von Sternberg (Bishop 1356-1363): a transversely divided shield with two in the form of a St. Andrew's cross superimposed Bishop rods . The oldest color depiction of this episcopal coat of arms on a monument in Schwerin Cathedral from 1570 shows the lower half of the shield in gold, the upper half in red, and above that are the two blue (probably more correct silver) bishop's staffs with gold curvatures.

After 1648 the coat of arms of the principality of Schwerin differed from that of the diocese. It had the following blazon: divided, above a golden griffin striding in blue, below an empty green field with a silver border . This coat of arms was also included in the Mecklenburg coat of arms after 1648.