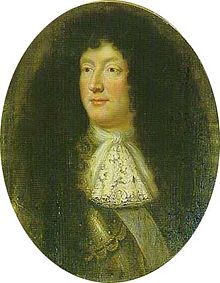 Christian was the first-born son of Duke Adolf Friedrich I and his wife Anna Maria (1601–1634), daughter of Count Enno of East Friesland .

He was postulated as coadjutor of the Schwerin monastery on August 26, 1625 . However, this fell to Wallenstein as a fief in 1628 . With the death of the administrator Ulrich of Denmark (1611–1633) on August 12, 1633, the then nine-year-old Christian became the legal administrator of the monastery. However, the monastery area had fallen from the hands of Wallenstein to the Swedes, who held it jure belli . The situation was not clarified until the Peace of Westphalia in 1648, when the two dioceses of Ratzeburg and Schwerin were secularized and awarded to Mecklenburg-Schwerin as compensation for the territories around Wismar that had fallen to Sweden .

After the death of his father on February 27, 1658, he took over sole rule in the partial duchy of Mecklenburg-Schwerin. In 1662 he went to Paris to the court of Louis XIV. There he transferred to the Catholic Church on September 29, 1663 and on the following day at the confirmation of his sponsor, King Louis XIV, assumed the surname Louis. Later he often signed only with Christian. He died in The Hague on June 11th jul. / June 21,  1692 greg. . His body was brought by ship to Dömitz , then via Schwerin on August 24th to Doberan . There he was buried in the minster .

Christian Ludwig was married twice, once to Christine Margarete , the second daughter of Johann Albrecht II (born March 31, 1615, † August 16, 1666). This was first on February 11th . / February 21,  1640 greg. married to Duke Franz Albrecht von Sachsen-Lauenburg († June 10, 1642 from the wounds in the Battle of Schweidnitz ). On July 6, 1650, she was married in Hamburg with Christian, but by a specifically designated to settle set of this (Christian) spiritual trial for malicious desertion on 19 October 1660 (as they did not return in her left bimonthly period to her husband) again divorced from him. This divorce was never recognized by her, but in the summer of 1663 it was declared lawful by ten professors of canon law at the University of Paris and confirmed in a papal power of attorney of August 6th on October 3rd, 1663.

His second wife was Elisabeth Angélique de Montmorency , Duchesse de Coligny, (* 1626). She was married to Gaspard , son of the Duke of Coligny , who died on February 9, 1649 during the Fronde near Charenton . The date of her marriage to Christian Ludwig is not known, probably March 3rd 1664. She died on January 14th July. / January 24,  1695 greg. in Paris. Both marriages remained childless, so that Christian's nephew Friedrich Wilhelm (I) , the eldest son of Duke Friedrich zu Mecklenburg , succeeded him.

On behalf of Christian Ludwig, a pleasure palace was built for him in 1660 near the Ratzeburg Cathedral - which belonged to his territory .