Charenton-le-Pont is a French commune in the department of Val-de-Marne , in the region Ile-de-France . It is located southeast of Paris at the confluence of the Marne into the Seine and borders the metropolis. The inhabitants are called Charentonnais . 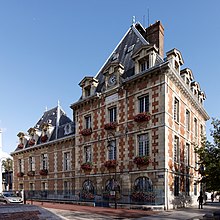 Outside the city of Paris, in Charenton, the Huguenots built a Protestant temple with 4,000 seats according to plans by the architect Salomon de Brosse in 1624 . Because at that time they were forbidden to conduct Reformed services in the city of Paris. In 1685, the same year when the Edict of Fontainebleau forbade the exercise of the evangelical faith, this church was also destroyed.

The place is, among other things, the seat of one of the world's largest eyewear manufacturers EssilorLuxottica .

One of the main structures within the city was the Château de Conflans , of which only the entrance gate remains today. It was in this castle that Joan II, Queen of Navarre and Philip of Évreux , married on October 9, 1329 ; Johanna died here on October 6, 1349.

Communes in the Arrondissement of Nogent-sur-Marne