Article so far completely unoccupied. Has been translated from the English Wikipedia, but the article there has already been criticized as unfilled. Please verify and substantiate with literature. 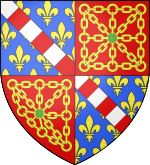 He inherited the county of Évreux from his father in 1319, got the county of Longueville in 1325 and ten years later, as the husband of Queen Joan II of Navarre, he became King of Navarre ( de iure uxoris ). He owned extensive fiefdoms in both northern France and Navarre, and because of that property and family ties, he was of the greatest influence in both countries.

When he took part in the Reconquista in 1343 , he was fatally wounded.

Philipp and Johanna had eight children: