The title of this article is ambiguous. Further meanings are listed under Artois (disambiguation) . 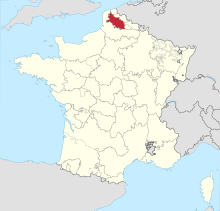 Location of the former county in France 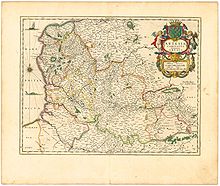 Historical map of the County of Artois from 1645

Landscape in the Artois near Delettes

Artois ( Dutch Artesië ; German  also Artesien ) is a historical province in northern France . Artois is located in the interior of the Pas-de-Calais department , the western part of which forms the former Boulonnais . The area of ​​the province is about 4000 square kilometers with a population of about one million people. Artois lies at the western end of a coal field that extends east through the Nord department and central Belgium .

The main cities of the province are Arras , Saint-Omer , Lens and Béthune .

Carolingian ancestral region between France and the Holy Roman Empire

The Artois was originally a Carolingian county to which the Counts Odalrich at the end of the 8th century and Ecfrid at the end of the 9th century are attested. In 898 the Artois was integrated into the county of Flanders by Count Baldwin II . In 1180 Philip of Alsace , Count of Flanders, outsourced the Artois as a dowry for his niece Isabelle von Hainaut on the occasion of her marriage to the French King Philip August .

Isabelle died in 1190 and Philip kept the Artois, but gave it out again in 1200 with the Peace of Péronne . With the Treaty of Guînes in 1212, Saint-Omer, Aire-sur-la-Lys and Guînes were ceded and in return the kidnapped Countess Johanna I and her husband Ferdinand were released. After the defeat in the Battle of Bouvines in 1214 and with the Treaty of Melun in 1226, all of Artois went to the French crown. In 1237 the country was raised to a French county for Robert I , a grandson of Philip and Isabelle. In 1384 it came under the rule of the Dukes of Burgundy . With the Burgundian inheritance in 1477, the Artois fell to the House of Habsburg, to whose Spanish line it belonged from 1556 to 1659. In 1579 the Union of Arras was closed in Arras . Artois did not return to French property until the Peace of the Pyrenees in 1659.

During the second half of the 19th century, the area benefited from an industrial boom, which was due to the rich coal deposits . During the First World War , the front line between German and Allied troops ran through the province and led to the complete destruction of infrastructure and landscape. You can still find dozens of war cemeteries and monuments between La Bassée and Arras, but hardly any remains of positions. Most impressive are the heights of Vimy (Canadian monument) and Loretto (French cemetery and ossuary).

With the collapse in coal demand since around 1960, the area - like others - suffers from industrial decline .

Ancestral families and noble families in the Middle Ages

Despite the almost two hundred year period in the Holy Roman Empire under the mighty Habsburgs, the county of Artois is always regarded as an ancestral area of ​​French history in France. This is due, among other things, to the fact that the long-established artesian aristocratic families were involved in French battles that have become mythical ( Battle of Bouvines , Battle of Azincourt ), in renowned noble tournaments and in crusades organized exclusively by French rulers. Their names stand next to those of the aristocratic warlords and the Western European monarchs.