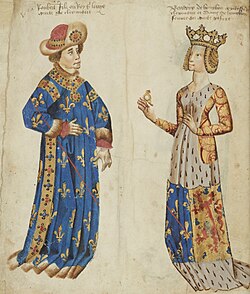 Prince Robert and his wife Beatrix of Burgundy Bourbon. Representation from the 15th century.

Robert von Clermont , also known as Robert de France , (* 1256 - 7 February 1317 ) was a royal prince of the French ruling dynasty of the Capetians . He was the youngest son of King Louis IX. of the saint († 1270) and Margaret of Provence († 1295). He is the progenitor of the Bourbon house , which is still in existence today , a Capetian branch line.

Like all his older brothers received Robert in 1269 with the Counts of Clermont-en-Beauvaisis and the basic rule Creil-sur-Oise and Sacy-le-Grand , a relatively small prerogative , unlike his uncles, with more significant territories in France have been equipped were. Robert was a French chamberlain and shaped by the example of his famous father and the knight ideals of his time, but did not take part in the fateful seventh crusade to Tunis . In 1272 Robert took King Philip III's entourage . on the campaign against Count Roger Bernard III. from Foix . In May 1279, at a tournament in Paris in honor of Prince Karl von Salerno , he received a severe head wound that led to persistent mental confusion, as a result of which he was no longer able to play an important political role at the royal court.

Robert of Clermont is buried in Saint-Jacques in Paris. 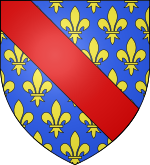 The coat of arms of Roberts de Clermont was carried on by his descendants.

Robert was betrothed to the Vice Countess of Limoges , Maria, in 1270 . However, in 1276 he married Beatrix , a granddaughter of Duke Hugo IV of Burgundy . Beatrix inherited the County of Charolais from his father John of Burgundy in 1276 , and the Seigneurie Bourbon from his mother Agnes de Dampierre in 1287/88 .

Ancestor of the Bourbons

The Roberts family received its name through the upgrading of the Bourbon rule to a duchy under Robert's son Ludwig the Lame of King Charles IV . All Bourbons living after him are descended from him and Beatrix von Burgund-Bourbon. As dukes of Bourbon, counts of La Marche and counts and dukes of Vendôme , they were represented as French feudal princes in the late Middle Ages. In 1525 the dynasty took the first place of the princes of royal blood and with Henry IV they came to the French royal throne in 1589, which they held with interruptions until 1848. The Spanish kingdom as well as the Italian duchy of Parma later came under Bourbon rule. The current ruling heads of state from the House of Bourbon are King Felipe VI. of Spain and Grand Duke Henri of Luxembourg .

The children of Roberts and Beatrix of Burgundy were: