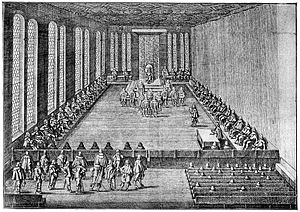 The term Reichstag originally referred to the assembly of the imperial estates of the Holy Roman Empire . The corporation standing next to the king or emperor developed from the informal court days since the 12th century and after 1495 became a permanent institution of the imperial constitution.

Until the 16th century, the Reichstag was convened at irregular intervals in a bishopric or imperial city and was the decisive counterweight of the estates to the central imperial power. From 1663 the Perpetual Reichstag met as a permanent envoy congress in Regensburg .

Imperial Assembly in the Franconian Empire

The Reichstag was originally a kind of army show, in which the king (or the house master ) inspected his nobles and their followers . These imperial assemblies were held in the early days of the Frankish Empire and took place in March and later in May (hence also called “Maifeld”), ie before the war campaigns of the following summer.

During the Saxon Wars of Charlemagne, the first imperial assembly took place in Paderborn in 777 .

The Reichstag in Worms (1495) had a decisive influence on the development of the empire . In addition to tangible results such as the peace in the country , the introduction of the Reich Chamber of Commerce and the common penny , the not recorded and not so tangible results of this Reichstag were extremely important. The Reichstag as a term and institution was shaped in a lasting way. The German King Maximilian I accepted the change from the Hoftag institution to the Reichstag as an influential political instrument. Institutionalization and the rule of law were promoted, which promoted state-building. The subsequent Reichstag in Lindau and Freiburg failed in the attempt to clarify the still disputed points of the imperial reform decided in Worms.

The Reichstag met around 40 to 45 times until 1663 and could last a few weeks or several months. It began - at least in its non-permanent time - in addition to ceremonial acts with the reading of the imperial proposition , the agenda set in advance by the emperor, in the Reichsrat and ended with the reading and notarization of the resolutions of the Reichstag, the Reichs Farewell .

The Diet of Speyer in 1542 and 1544 granted the emperor aid for an offensive against the Ottomans. At the "armored" Reichstag (Augsburg 1547/1548), Emperor Charles V failed with his plans to overthrow Lutheranism and to establish a strong imperial power in Germany. With two exceptions (1570 in Speyer, 1582 in Augsburg), the Reichstag has been held in Regensburg since 1567 . The last Reich farewell was the Youngest Reich Farewell ( recessus imperii novissimus ) from 1653/54. This Reichstag in Regensburg had the task of discussing the issues that had not been dealt with in the peace negotiations of 1648 to end the Thirty Years' War.

The permanence of the Perpetual Reichstag after 1663 was never formally resolved, but was laid out in the resolutions of the Peace of Westphalia and gradually developed from them. This Reichstag, which met in Regensburg , never became a parliament or a state representative body . Instead, it always remained the representative institution of the imperial estates . Since it met continuously, however, it quickly developed into a pure ambassadors' congress , at which the owners of the territories of the imperial estates themselves only appeared relatively rarely.

When the plague that broke out in Europe in 1713 also struck Regensburg, the Perpetual Reichstag was held temporarily in Augsburg in 1713 and 1714. A second special situation arose from 1742 to 1745, when the War of the Austrian Succession triggered the relocation of the meetings to Frankfurt am Main .

At its session on February 25, 1803, the permanent Reichstag in Regensburg approved the negotiated Reichsdeputationshauptschluss , which is one of its most far-reaching resolutions and sealed the progressive decline of the Holy Roman Empire during the first three Napoleonic Wars (1800-1806). The Reichstag existed until the empire was dissolved in 1806.

Since 1498 the Reichstag has comprised three colleges:

The Reichstag was only allowed to be convened by the emperor, but since Charles V's election surrender in 1519 he was obliged to ask the elector for approval before sending the letters of invitation known as “letters of invitation”. The emperor also had the right to set the agenda. But he only had a minor influence on the topics actually discussed.

Old Town Hall of Regensburg , from 1663 seat of the Perpetual Reichstag

Since the Perpetual Reichstag has not been formally ended since 1663, its resolutions could not be drawn up as a Reich farewell. The resolutions were therefore laid down in the form of so-called imperial conclusions. The ratification of these resolutions was usually carried out by the principal commissioner , the emperor's representative at the Reichstag, in the form of an “Imperial Commission Decree”. The imperial farewells and imperial conclusions dealt with a wide range of subjects on which a consensus had to be reached between the emperor and the various estates. Questions relating to the establishment and expansion of government, administration, justice and the military were dealt with at the national level. Topics were also dealt with, such as the maintenance and restoration of peace, the regulation of peaceful coexistence between the various Christian denominations, the declaration of war and peace, the financing of imperial institutions and imperial enterprises and the organization of the economy in the empire.

The decisions were made in a lengthy and complicated decision-making and advisory process. If decisions were made by majority or unanimous decision in the respective councils of states, the results of the deliberations were exchanged and attempts were made to submit a joint resolution of the imperial estates to the emperor. The decisions of the Electoral and Imperial Princes' Council were important, the vote of the Imperial City Council was mostly of subordinate importance, if it was noticed at all. The consultations themselves took place in separate rooms according to the colleges. In these deliberations, in contrast to the entire body, the majority principle normally applied.

Due to the increasingly difficult decision-making processes, attempts were also made to facilitate the decision by means of various committees. Experts and envoys from the imperial estates were mostly sent to these committees. From the 16th century onwards an elite of experts and politicians developed who were particularly familiar with the topics and imperial affairs dealt with at the Reichstag and enjoyed a reputation across all classes.

After the Reformation and the Thirty Years' War, the Corpus Evangelicorum and later the Corpus Catholicorum were formed as a result of the religious split in 1653 . These brought together the imperial estates of the two denominations and discussed imperial affairs separately. The Peace of Westphalia stipulated that in religious matters, but also in other political areas, the principle of consensus should no longer apply, but rather the principle of majority.

The tradition of the Reichstag is conveyed by the Reichstag files , which have been published by the Historical Commission at the Bavarian Academy of Sciences since 1858 at the suggestion of Leopold von Ranke .