Brabant ( German [ bʁa'bant ], Dutch [ ˈbraːbɑnt ], French [ bʁa.bɑ̃ ]) is a historical area that roughly consists of the Belgian provinces of Antwerp and Brabant (today in Flemish Brabant , Walloon Brabant and the Brussels region -Hauptstadt divided) and the south of the Netherlands located province of Noord-Brabant is.

The area of ​​Brabant was inhabited by Menapians at the time of the Roman Empire , after whose submission by the Romans it belonged to the province of Gallia Belgica . In the 5th century the Franks took possession of the area.

In 870 the area came to the East Franconian Empire as part of Lorraine and was then referred to as a Gaugrafschaft . The name Pagus Bracbantensis , to which the later country name goes back, is traced back to braecbant , which means swampy area or marshland ( braec : break or swamp ; bant : area). Between 900 and 923 Lorraine came to the West Franconian King Charles the Simple . Since 959 the Brabantgau was ruled by the Counts of Verdun .

In the 11th century, the four counties in the Brabantgau were divided into three territories:

The Dukes of Brabant soon gained power and independence, but were embroiled in multiple feuds with their neighbors and wavered between leaning towards the Holy Roman Empire and France . Of these, the following are particularly noteworthy:

After Johann III. Death in 1355 and with it the extinction of the older line of the Reginare , the husband of his daughter Johanna, Wenzel von Luxemburg , brother of Emperor Charles IV, united Brabant with his own hereditary land. But under him the country became very confused. After Wenzel's death in 1383, his widow Johanna appointed her niece Margaret of Flanders and her husband, Duke Philip the Bold of Burgundy , as heirs. The government initially took over Philip's second son, Anton , 1404, who also united Luxembourg with Brabant. Anton fell at Azincourt in 1415 . His two sons and successors died childless, and so Brabant, Limburg and Luxembourg fell to Philip the Good of Burgundy in 1430 , and finally, through the marriage of Mary of Burgundy to Archduke Maximilian in 1477 with the other Dutch provinces, to the House of Austria . 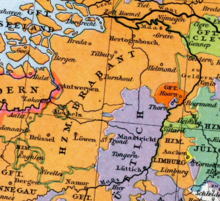 The Duchy of Brabant in the XV. century

Brabant was the main country of the Spanish Netherlands , Brussels its capital. With the division of the Holy Roman Empire into a circle , it became the Burgundian Empire .

An important east-west long-distance trade route, the Brabanter Straße , connected the trading and trade fair cities of Leipzig via Erfurt, Marburg, Siegen, Aachen and Cologne with Brabant in the high and late Middle Ages .

The Duchy of Brabant rebelled against Spain in the Dutch uprising and in 1579 joined the Union of Utrecht with Calvinist provinces (although mostly Roman Catholic themselves) . As a result of the uprising of the Netherlands , the northern part ( 's-Hertogenbosch ) was separated from the duchy and in 1648 was incorporated into the Dutch Union as part of the generational states (which meant for the population until 1816 that they were not allowed to practice the Catholic faith), while South Brabant up to 1714 remained with the Spanish-Austrian line. After the War of the Spanish Succession in 1714, Brabant and the other southern provinces of the Netherlands reverted to the Austro-Habsburg imperial family. When a violent dispute arose under Joseph II over the rights of Brabant, which it owned in the Joyeuse entrée , the Brabant estates renounced the House of Austria in 1790 , but gave in again when Leopold II gave them back the rights they had demanded.

In 1795 the Austrian Netherlands , including Brabant, were annexed by France and integrated into the French state . In the Peace of Campo Formio (1797), the Austrian Emperor Franz I formally ceded his Dutch possessions to France. The northern Brabant became the Deux-Nèthes department with the Antwerp prefecture , the southern one became the Dyle department with the Brussels prefecture.

As Napoleon I in 1810 and the Dutch Brabant with the French empire united, together with a part of was the same money the Bouches-du-Rhin formed. As a result of the Paris Peace of 1814 and the resolutions of the Congress of Vienna , Brabant became part of the United Kingdom of the Netherlands and formed the three provinces of Noord-Brabant , Antwerp and South Brabant . South Brabant with Brussels, the capital of Brabant, was the center of the Belgian uprising in 1830 . South Brabant (as Province of Brabant ) and the Province of Antwerp became part of the new Kingdom of Belgium , while Noord-Brabant remained part of the Netherlands . In 1995, as part of the federalization of the Belgian state, the province of Brabant was divided into the provinces of Flemish Brabant , Walloon Brabant and the Brussels-Capital Region .

Since the middle of the 19th century , the title “Duke of Brabant” has been given to the king's eldest son or, if the king has no son, to the ruler's eldest grandson. In this tradition, the first bearer of the title was the later King Leopold II. The eldest daughter of King Philippe , Elisabeth , now also bears this title.

Landgraves and Dukes of Brabant

Dukes of Lower Lorraine and Landgraves of Brabant

Dukes of Brabant and Lower Lorraine

Dukes of Brabant in modern times