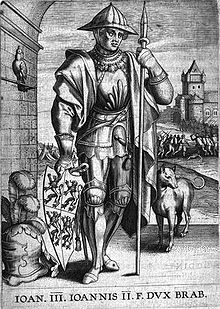 At the beginning of his rule he had to struggle on the one hand with the problem that the property of the Brabant citizens abroad had been confiscated due to the debts of the dukes John I and John II, on the other hand with the fact that the advisers of the young duke the charter von Kortenberg did not respect them. Both problems were solved by the fact that one accepted the charter and the other assumed the duke's debts in return.

The attempt of the French king , Flanders isolate economically, led to controversy with Brabant, as this was contrary to the economic interests of the Duchy. In 1315 he supported the Bishop of Liège , Adolf II von der Mark , in the uprising of his subjects.

At the beginning of the Hundred Years War Johann stood on the side of England and accompanied its King Edward III. on his campaigns. In return, Philip VI. of France again seize the Brabant property abroad, which led to an uprising of the citizens of Brussels against their duke. Johann III. responded by beheading one of the leaders. From 1340 he broke away from England and leaned closer to France, married his daughters to French allies, the Duke of Luxembourg , the Count of Flanders and Duke Rainald III. von Geldern , as well as his heir Heinrich with a four-year-old daughter of the French Crown Prince Johann .

Since Johann's three sons died before him and had no male offspring themselves, his eldest daughter Johanna inherited the duchies.