Charles IV. Is on January 6 in Milan , which is his 1354 started the Italian campaign , the king of no longer opposes Italy crowned. On April 5th he is in Rome by one of Pope Innocent VI. sent Cardinal together with his third wife Anna von Schweidnitz to be crowned Emperor and Empress of the Holy Roman Empire . ( At that time, the papal seat is still Avignon ). Karl leaves the peninsula shortly afterwards without having taken care of the order of the situation there.

In Venice , the Doge Marino Faliero is accused of having planned a coup to make himself prince. However, Faliero is already 80 or 81 years old at this point, elected for life and has no male offspring. His alleged co-conspirators, among them the architect Filippo Calendario , are hanged in front of the Doge's Palace on April 16, and Faliero himself is beheaded a day later on the Scala Foscara . He then falls victim to the Damnatio memoriae . Giovanni Gradenigo is hastily elected as his successor . 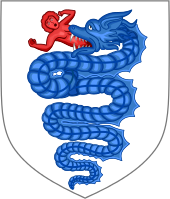 Coat of arms of the house of the Visconti 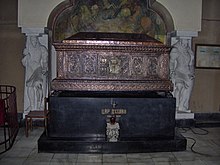