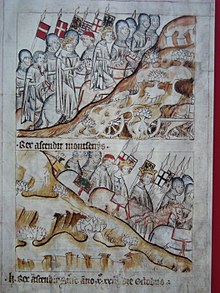 In historical research, the military expeditions of the Frankish and later the Roman-German kings and emperors to Italy are referred to as the Italian train (often also called the Romfahrt or Romzug ) . These ventures could lead to a stay of several years in imperial Italy . The aim of the first move of a ruler was usually the coronation of emperors by the Pope in Rome (hence the name Romfahrt or Romzug). This was partly preceded by the coronation as King of Italy .

In addition, the Italian trains served to secure imperial rule , safeguard imperial legal claims and use the considerable financial resources that the imperial Italian municipalities had at their disposal. Due to the high economic power of Imperial Italy, the income to be achieved there was much higher than in the northern part of the German Empire . Not infrequently the features were marked by armed conflicts between the king or emperor on the one hand and Italian cities or princes on the other (see also Ghibellines and Guelphs ).

However, imperial rule in imperial Italy was relatively weak during the Middle Ages , as the Roman-German emperors did not have an adequate administrative structure and the effective exercise of imperial claims against the communes required the presence of the emperor. The resulting personal presence of the ruler led to an increased number of notarizations for Italian recipients. Formally, the Archbishop of Cologne held the dignity of Arch Chancellor for Italy , but the office lost its political importance in the 13th century.

According to Marie-Luise Favreau-Lilie's thesis, the 15th century saw a structural change in the character of the trains in Rome. They lost their strong military orientation. More recent research no longer inquires in a one-sided north-south direction about the influences of the rulers in Italy, but the actions of the East Franconian-German kings and emperors appear “as the result of a complex interplay of forces in which the rulers each subordinate only one actor many were ”.

From the duty of the imperial estates to military service as vassals the forwards Romans month from which the troops be parked contingent and it applied Sold as in the Reichsmatrikeln held basis for calculating taxes in the Holy Roman Empire certain.