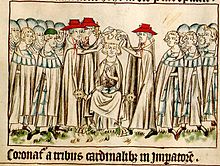 Codex Balduini Trevirensis : The imperial coronation of Henry VII by the cardinals sent by the Pope

Illustration of the battle in the Chronica Hungarorum

Erik Magnusson (on his seal)