In the summer, Emperor Michael VIII of Nikaia sends General Alexios Melissenos Strategopulos, appointed Caesar , to Thrace to monitor the borders with Bulgaria and Epirus there; Furthermore, he should check the strength of the defenses of Constantinople and cause unrest in the area around the city. Since no major battles are expected, General Alexios' army consists of only about 800 horsemen and a few infantry. In the Thracian settlement of Selymbria near Constantinople, Alexios learns from the local farmers that the majority of the Latin army is on the way with the Venetian fleet to raid the city of Daphnusia , which controls the entry from the Black Sea into the Bosporus . Alexios Strategopulos decides, without consulting his emperor, to take the chance and take the almost undefended city by surprise with his few soldiers.

Map with Ottokar II's sphere of influence around 1261

In a Church Slavic insert in the Byzantine Chronicle of John Malalas , the Baltic god of thunder Perkūnas and Saulė (the sun) are mentioned, which was said to have been forged by the blacksmith Teliavelis and hurled into the sky. 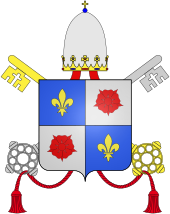 Coat of arms of Urban IV.