Counts of Schauenburg and Holstein 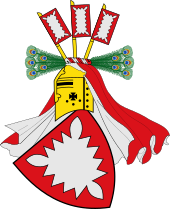 The noble family of Counts von Schauenburg and Holstein originally came from the Schauenburg (today: Schaumburg) near Rinteln ( district of Schaumburg ) on the Weser . In addition to the county of Schaumburg , known since around 1480 , the family was enfeoffed with the counties of Holstein and Stormarn in the year 1110, with its residence towns of Bückeburg and Stadthagen . In 1640 the family died out. 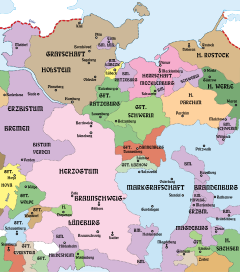 In 1110, Duke Lothar von Supplinburg appointed his feudal man Adolf von Schauenburg to succeed Count Gottfried von Hamburg , who had died fighting the Slavs. With this appointment, a period of rule in Schauenburg began in the county of Holstein , which then lasted for almost 350 years. In 1130 Adolf I died and he was followed by his son Adolf II, who fell against the Slavs in 1164 in the battle of Verchen in Western Pomerania.

Adolf I to his grandson Adolf III. initially neither referred to themselves as Counts of Holstein nor were they so dubbed by their contemporaries. Adolf IV did not take over the title Graf until 1225 from his predecessor, the temporarily appointed Danish feudal lord Count Albrecht von Orlamünde . Until the beginning of Albrecht's rule, only the Holstein Overbode was referred to as "von Holstein" .

Adolf III. von Schauenburg and Holstein temporarily lost Holstein to Denmark in the battle of Stellau in 1201 and withdrew to the county of Schauenburg. It was not until his son Count Adolf IV. Succeeded in recapturing Holstein in the Battle of Bornhöved in 1227 . After this victory, the Counts of Holstein not only consolidated their rule in Holstein, which belonged to the Holy Roman Empire , but also soon gained influence in the neighboring Duchy of Schleswig , which was under the Danish crown.

From 1261 the family divided into several, partly short-lived lines over the decades . As a result, there were several rulers in Holstein at the same time:

The division ended in 1390, when the Rendsburg line occupied most of Holstein. Since 1326 it has been enfeoffed several times with the Danish Duchy of South Jutland or Schleswig . Only the small county of Holstein-Pinneberg, which was connected to the county of Schauenburg, continued to exist.

The following counts were the most important for Holstein and Stormarn:

Since Adolf VIII died without an heir, the Holstein nobility elected his cognatic nephew, King Christian I of Denmark , who had ruled since 1448 , as the new Duke of Schleswig and, contrary to the Salian feudal inheritance, as Count of Holstein and Stormarn. With this, the House of Oldenburg came to power in Schleswig and Holstein as the successor to the Schauenburgs and ruled here until 1864.

The Pinneberger line ruled until 1640 in the small county of Holstein-Pinneberg , in the Schaumburg ancestral region and from 1476 in the rule of Gemen .

Significance of the count family in Lower Saxony 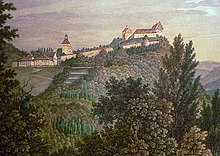 The Schaumburg near Rinteln (around 1800)

The Schauenburgers carried out an orderly expansion of the state with the establishment of towns, such as Stadthagen and Rinteln. The Schaumburg counts were in the 13th century Gografen the district Wennigsen (Deister) and for over a hundred years in the Deister wealthy -Vorland. This circumstance brought with it that the Counts of Schauenburg and Holstein were subordinated to the bailiwick of the Wennigsen monastery . The count family donated property to the monastery.

The County of Sternberg belonged to the Schauenburg property from 1377 to 1402/05, when it was pledged to the noble lords of the Lippe . Through his marriage to Cordula von Gehmen (today: Gemen ) in 1476, Count Johann IV. Von Schauenburg and Holstein-Pinneberg received the rule of Gemen from his son-in-law's father-in-law. After an inheritance dispute in 1635, Gemen fell to the Counts of Limburg-Styrum .