from Wikipedia, the free encyclopedia
This is the spotted version , flagged on July 25, 2020 . There are 2 pending changes that have yet to be viewed. 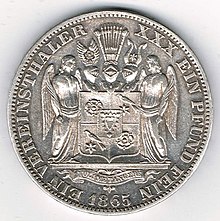 Vereinstaler with coat of arms of the principality of Schaumburg-Lippe

Until 1946, Schaumburg-Lippe was an independent German state ( county , principality , free state ) in what is now Lower Saxony , between the city of Hanover and the Westphalian border. The name refers to the Schaumburg in the Weser Mountains (today: Rinteln ) and the Counts of Lippe , who in 1647 formed the counts of the newly formed county of "Lippe", the House of Schaumburg-Lippe , from a branch line . The capital was Bückeburg .

North of the area is the Steinhuder Meer , in which the former schaumburg-Lippe island fortress and Wilhelmstein military school is located. In 1946, Schaumburg-Lippe became a district part of the new state of Lower Saxony and was assigned to the administrative district of Hanover . In 1977 the district was merged with parts of the Grafschaft Schaumburg district as part of the regional and administrative reform ; since then both have formed the district of Schaumburg .

The population of the as yet undivided county of Schaumburg has been Lutheran since the introduction of the Reformation by the Counts of Schauenburg in 1559 . This remained so when, after the division in 1647, the reformed House of Lippe took over rule. Catholics (1.3 percent), Jews (0.4 percent) and non-denominational groups formed insignificant minorities until the Second World War.

The Evangelical Lutheran Regional Church of Schaumburg-Lippe still exists today within the boundaries of the former territory. Your bishop (state superintendent until 1949 ) has his seat in Bückeburg.

Schaumburg-Lippe was created in 1647 when the Grafschaft Schaumburg was divided between the House of Braunschweig-Lüneburg , the Landgraves of Hesse-Kassel and the Counts of Lippe . During the Thirty Years' War in 1640, Count Otto V zu Holstein-Schaumburg, at the invitation of the Swedish Field Marshal Johann Banér, took part in a meeting of the warring parties in Hildesheim , which ended with a banquet and drinking binge, at which some participants are said to have been poisoned. On November 15, 1640, the young and still childless count, the last male representative of his sex, died. His legacy was split in subsequent years. The division was defined in several treaties in 1647 and confirmed in the Westphalian Peace Treaty in October 1648 . As a result of this division, from 1647 there was a Grafschaft Schaumburg (Hessian part) connected with Hessen-Kassel by personal union and the Grafschaft Schaumburg-Lippe (Lippe part), in which a branch line of the Lippe Counts ruled. This part was later mostly referred to as Schaumburg-Lippe.

The existence of the small territory was difficult from the start. First of all, important facilities were used together with the Hessian part, the Grafschaft Schaumburg, such as (only for a short time) the estates, but above all the profitable mining (velvet mining) of the Bückeberge . Since the Landgraves of Hessen-Kassel continued to be the liege lords of the Bückeburg family, territorial independence was always in jeopardy. As a result of this threat, Count Wilhelm (reign 1748–1777) developed his specific form of national defense with an army of up to 1,000 men, although small in absolute numbers, but large for the country . He also built the Wilhelmstein and the Wilhelmsteiner Feld. Previously, his grandfather, Count Friedrich Christian, had questioned the existence of the county through an idiosyncratic policy.

Wilhelm left an army, but also a lot of debts, which plunged his successor Philipp Ernst into a deep domestic political crisis. After his death, Hessen-Kassel raised hereditary claims and occupied the land in the Bückeburg dispute in 1787 , but was forced to retreat through Hanoverian and Prussian intervention. Then a guardian was appointed for the still young Hereditary Count Georg Wilhelm, who exercised the regency together with his mother Juliane .

After Count Georg Wilhelm (1784–1860) took over the government in 1807, he was in fact raised to prince on April 18, 1807 by joining the Rhine Confederation . In 1815 the principality joined the German Confederation and after 1871 became a federal state of the German Empire . Georg Wilhelm, who initially supported domestic political reforms (introduction of a modern property tax in 1812, land estates with a representation of the farmers in 1815), had to find out at the Congress of Vienna that the country could not expect any territorial expansion and that a mediatization was to be expected. For this reason, several large estates were bought up in Southeastern Europe in the following years in order to guarantee permanent security (= appanage ) for the princely family.

From 1895 to 1905, the prince tried to enforce his inheritance claims to the Principality of Lippe in a legally and historically significant succession dispute, but he did not succeed. The poet Hermann Löns lived in Schaumburg-Lippe from 1906 to 1909 and summarized his negative experiences there with small states in the sharp satire " Duodez ". Prince Adolf II zu Schaumburg-Lippe renounced his throne in the November Revolution on November 15, 1918, as one of the last remaining monarchs in Germany . The government for the federal state of Schaumburg-Lippe was taken over by the workers 'and soldiers' council in Bückeburg until the situation was finally reorganized .

After the First World War , Schaumburg-Lippe became a free state within the Weimar Republic .

In Schaumburg-Lippe, the SPD was initially the strongest parliamentary group in the state parliament, and by March 1933 it also formed a governable coalition government with the German state party . In a referendum in 1926, the population rejected the country's annexation to Prussia, which was favored by the state government. Another attempt at the Anschluss failed in the Landtag in 1930 due to the necessary two-thirds majority.

The election results are described in the article Landtag of the Free State of Schaumburg-Lippe .

Since the Second World War

With the ordinance No. 46 of the British military government of August 23, 1946, "concerning the dissolution of the provinces of the former Prussia in the British zone and their new formation as independent states", the state of Hanover received its legal basis.

A referendum of January 19, 1975 to restore the former country (according to Article 29 of the Basic Law ) was rejected by the federal legislature despite a positive outcome.

In the reorganization of districts in Lower Saxony, the district on August 1, 1977 with the was Grafschaft Schaumburg (district town Rinteln) - the since 1647 to Hesse-Kassel , from 1866 to the Prussian province of Hesse-Nassau for and until 1932 Province of Hanover had heard - united to form the new district of Schaumburg (district town of Stadthagen ). The city of Hessisch Oldendorf became part of the Hameln-Pyrmont district . This means that many of the areas that were Schaumburg until around 1647 are now under uniform administration again (but no longer Steinhude, Großenheidorn and the Schaumburg offices of Lauenau and Bokeloh , which were already assigned to the Principality of Calenberg after 1640 , and also no longer Hessisch Oldendorf).

Seal of the Princely Schaumburg-Lippe Government

The principality had had a single vote in the Federal Council since 1867 . Its capital was Bückeburg , which in 1905 only had 5500 inhabitants. Administratively, the small state was divided into the two cities of Bückeburg and Stadthagen and the three offices of Bückeburg, Stadthagen and Hagenburg . Since 1879 the princely schaumburg-Lippe district court was in Bückeburg, to which the two district courts in Stadthagen and Bückeburg were subordinate. On the basis of a state treaty with the Grand Duchy of Oldenburg, the Higher Regional Court in Oldenburg was the court of appeal responsible for cases from the little country. After 30 years, Schaumburg-Lippe signed a state treaty with Prussia, whereby the previous Oldenburg tasks have been performed by the Higher Regional Court of Celle. Militarily, the principality belonged to the replacement district of the VII Army Corps , 26th Brigade, whose Jäger Battalion No. 7 was stationed in Bückeburg. The Principality of Schaumburg-Lippe had concluded a military convention with Prussia .

According to the constitution of the Free State of Schaumburg-Lippe of 1922, the legislative power lay essentially with the state parliament, which consisted of 15 members who were elected for three years by proportional representation. The state government elected by the state parliament was responsible for the executive power, which was a college of five members, two of whom were full-time and three part-time. The full-time chairman of the state government held the title Council of State . The internal administration was divided into the districts of Bückeburg and Stadthagen and the cities of Bückeburg and Stadthagen. In 1933 there were 34 parishes and three parish-free manor districts in the Bückeburg district, in the Stadthagen district there were 32 parishes and five parish-free manor districts in addition to the areas of Hagenburg and Steinhude am Meer.

The jurisdiction in the Free State of Schaumburg-Lippe continued to be incumbent on the two local courts (Stadthagen and Bückeburg) and the regional court of Bückeburg; The Prussian Higher Regional Court in Celle was also still responsible for Schaumburg-Lippe by virtue of a state treaty renewed in 1928.

The former Schaumburg-Lippische Landesarchiv is now in the Lower Saxony State Archives in Bückeburg .

Rulers and heads of government

State minister or chairman of the state government

Schaumburg-Lippe had a very differentiated economic structure. Up until the 19th century agriculture formed an important basis, with arable farming in particular being comparatively profitable. In addition, linen weaving was particularly important in the northern communities. The linen was especially exported to the Netherlands , but also to Scandinavia . In the 18th century, migrant work (Hollandgang) was another important source of income for the rural lower classes.

Hard coal has been mined in the Bückeberg mountains since the late Middle Ages . After the division of the county, the mining took place jointly with the Landgraviate of Hessen-Kassel ("velvet mining"); the income was shared between the owners. After 1866 the Hessian shares were transferred to Prussia. Hard coal mining expanded rapidly, especially in the 19th century. In 1905 the Georgschacht near Stadthagen was put into operation as an architecturally significant headquarters.

Several glassworks were built in the 19th century on the slope of the Bückeberge and in Stadthagen. But they never achieved the importance of the huts in Obernkirchen (Heye, Stoevesandt) and Rinteln (Stoevesandt) in the neighboring Hessian county of Schaumburg.

In addition to natural resources, the railroad was an important engine for industrialization . From the important east-west connection Cologne - Minden - Hanover - Berlin (cf. Köln-Mindener Eisenbahn ), the previously insignificant Stadthagen, where after 1871 many small and medium-sized industrial companies settled. With the construction of the Georgschachtes near Stadthagen and the north-south connection through the opening of the Rinteln-Stadthagener Railway in 1900, the importance of the region increased even further. With the end of coal mining in 1961, this phase of the Schaumburg-Lippe economy ended.