The district of Helmstedt is a district in the east of Lower Saxony on the border with Saxony-Anhalt .

With an area of ​​around 670 km², the Helmstedt district is one of the smallest in Lower Saxony. The district consists of the three cities Helmstedt , Schöningen and Königslutter am Elm as well as 20 other communities.

The district is located in the northern Harz foreland and lies on the threshold of the North German Plain .

The landscape is shaped by the Elm and Lappwald ridges , which form the nature park of the same name .

Climatically, the area lies in the transition zone between maritime and continental weather influences.

The following table lists all former municipalities in the Helmstedt district and their subsequent affiliation:

A district of Helmstedt has existed since January 1, 1833 and was part of the Duchy of Braunschweig when it was founded . It was divided into the offices of Helmstedt , Schöningen , Königslutter , Vorsfelde and Calvörde . The population of the district at that time was a little over 40,000 inhabitants; more than 90% of the population lived from agriculture . The district management was located in the current building of the Zone Border Museum in Helmstedt. In 1871 all municipalities belonging to the district were merged into a municipal association, whose organs were the district assembly (today's district council ) and the district committee .

The Braunschweig – Helmstedt – Magdeburg railway was put into operation in 1872 and, like the development of the “Trendelbusch” open-cast lignite mine two years later, ensured an economic upswing in the area between Elm and Lappwald. In the period that followed, lignite mining shaped the landscape and the economic development of the region through a large expansion of the open-cast mine.

The Reichsautobahn 6 (Hanover – Berlin) leading through the district was completed in 1937 and ensured a good infrastructural connection to the area. Today's Bundesautobahn 2 is one of the busiest roads in Germany. 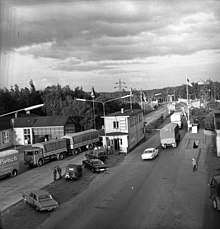 Border checkpoint in Helmstedt in June 1967

Since 1939 the lower administrative authorities in the Reich - outside of Prussia - have been uniformly referred to as a district.

Towards the end of the Second World War in April 1945, the region was occupied by American troops. The district of Helmstedt fell into the British zone of occupation after the end of the war ; the district's Calvörde exclave was, however, added to the Soviet occupation zone due to its eastern location . At the same time, the Preußisch Offleben community moved from the Haldensleben district to the Helmstedt district and merged with the Offleben community there. During the Cold War , the Helmstedt district was on the immediate border with the Soviet sphere of influence. The Helmstedt checkpoint, which was established in July 1945, developed during this time - due to its geographical proximity to West Berlin - into the largest European border crossing.

The uniform license plate "HE" for the district was introduced in July 1956.

As part of changes to the district area in 1972 and 1974, the city of Vorsfelde was transferred to the independent city of Wolfsburg , and the newly created community of Rüßen with Brechtorf and Eischott went to the district of Gifhorn . In return, a number of communities between Wolfsburg and Königslutter came from the Gifhorn district to the Helmstedt district; These gains make up the enlarged communities of Lehr and Rennau as well as part of the areas that are united with the city of Königslutter.

Seat of the district administration in Helmstedt

See: Landtag constituency Helmstedt - Official results of the district on the elections of the Lower Saxony state parliaments

The design of the municipal coat of arms for the Helmstedt district comes from the Hanover State Archives and from the heraldist and coat of arms painter Gustav Völker , who designed all the coats of arms in the Hanover region. The coat of arms was adopted by the district council on December 12, 1951 and the Lower Saxony Minister of the Interior approved it on July 9, 1952.

On March 15, 2013, the district council unanimously decided to start merger negotiations with the city of Wolfsburg . The aim of these negotiations should be the dissolution of the Helmstedt district and the formation of a community association Wolfsburg-Helmstedt. On March 13, 2013, the City Council of Wolfsburg also voted unanimously to start negotiations. The merger plans in the form of a community association Wolfsburg-Helmstedt were rejected by the state of Lower Saxony as incompatible with the Lower Saxony constitution. However, neither the district council of the Helmstedt district nor the council of the city of Wolfsburg have taken a decision to officially declare the merger negotiations over. In this respect, the merger talks are on hold until further notice.

The economic development of the district is strongly influenced by the neighboring regional centers of Braunschweig and Wolfsburg. One of the largest employers in the region is the Volkswagen plant located in neighboring Wolfsburg with a large catchment area.

Since the end of the 19th century, large areas of lignite have been mined in opencast mines in the southern district ( Helmstedter Revier ) , which also greatly changed the landscape of the region. The lignite was mined by Braunschweigische Kohlen-Bergwerke  AG (BKB) and converted into electricity by its own power plants. For many years, the BKB was the largest employer in the Helmstedt district. Today, the generation and supply of energy is handled by companies in the E.ON Group .

In the municipality of Grasleben in the north of the district, rock salt has been extracted in a salt mine for many decades . The mine is now operated by the esco company.

Agriculture has traditionally played an important role in the rural district of Helmstedt. In particular, sugar beet cultivation has been practiced on a large scale since the beginning of the 19th century.

The largest employer in the district is the AWO Psychiatry Center in Königslutter with around 1050 jobs .

The Helmstedt district is connected to the German railway network with stops on the Braunschweig – Magdeburg railway line, which is used by intercity and regional trains.

On July 1, 1956, the district was assigned the HE distinguishing mark when the vehicle registration number that is still valid today was introduced . It is still issued today.