The district of Börde was created in the course of the district reform on July 1, 2007 as a regional body in the state of Saxony-Anhalt through the merger of Bördekreis and Ohrekreis .

The second largest district in Saxony-Anhalt in terms of area has a diverse landscape. The agriculturally very productive Magdeburg Börde covers the entire south. The opposite pole in the north is part of the Colbitz-Letzlinger Heide , on whose sandy soil stands next to pine forests the largest closed linden forest in Europe (approx. 220 ha). It is joined to the west, separated by the Mittelland Canal , by the Flechtinger Höhenzug landscape protection area , which is also overgrown by forest, but has elevations of up to 150 meters. The highest elevation in the district is the Heidberg , located at 211.1 meters near Sommerschenburg . The Drömling lowland moor extends from numerous artificially created drainage ditches to the northwest . It is drained by rivers that flow through the district from south to north ( Aller ) and from north to south ( Ohre ), while the Bode touches the south. The most important river is the Elbe , which forms the district boundary in the east.

History of the area

The historical roots of the district are diverse and go back to the Middle Ages . In terms of area, the Archdiocese of Magdeburg , which was created in 968, had the largest share , whose sphere of influence covered the eastern and northern part of today's district and to which the cities of Wanzleben , Wolmirstedt and Haldensleben , but also in the far west of Oebisfelde belonged. The even older Diocese of Halberstadt , founded in the 9th century, ruled the southwest, including the villages of Gröningen , Oschersleben and Weferlingen . With a narrow tongue of land that from the north to Flechtingen was enough for the was Electorate of Brandenburg belonging Altmark involved in today's district area.

While the areas of the diocese after the Thirty Years' War also came under the rule of Brandenburg, the north to Brunswick survived exclave Calvörde as Office Calvörde with their ten municipalities to 1945. She was since 1343 part of the Brunswick duchies that were transformed in 1918 to Free State of Brunswick. Most recently, the exclave belonged to the Helmstedt district . Likewise, the areas of the Grossalsleben Office (Grossalsleben, Kleinalsleben and Alikendorf) belonged to the Gernrode Monastery, which was directly part of the empire, from 961 onwards. During the Reformation, the Lords of Anhalt declared themselves guardian of the monastery and incorporated the area into their domain. With this, the Grossalsleben office became part of the Duchy of Anhalt and later of the Free State of Anhalt, and until 1949 it remained a Anhalt exclave surrounded by Prussian territory. The area around Grossalsleben belonged to the Ballenstedt district until 1949 and only changed to the Oschersleben district in that year.

The Brandenburg area was initially assigned to the Holzkreis , one of the four districts of the Duchy of Magdeburg founded in 1680 . When Prussia carried out an administrative reform in 1815, the districts of Oschersleben (Bode) , Neuhaldensleben (1938 Haldensleben), Wolmirstedt and Wanzleben were established in what is now the district . This structure had - at u. a. 1952 and 1988 changed district areas - with the districts of Oschersleben , Haldensleben , Wolmirstedt and Wanzleben in principle until June 30, 1994, before the first district reform of Saxony-Anhalt was formed in the north of the Ohrekreis and in the south of the Bördekreis . Municipalities from the neighboring districts of Klötze and Staßfurt were also incorporated. After only thirteen years, these two districts were merged on July 1, 2007 to form the Börde district.

The following overview shows the population development in the area of ​​today's Börde district (population 1990 as of October 3, otherwise December 31 of each year).

With 73 inhabitants per km², the district of Börde is far below the average of the state of Saxony-Anhalt with 110 inhabitants (2013). The district town of Haldensleben has fewer than 20,000 inhabitants, on the other hand there are numerous places with more than 1,000 inhabitants in the area around the north. There is a clear gap in population density from east to west.

From 1991, "HDL" for Haldensleben, "OC" for Oschersleben, "WZL" for Wanzleben and "WMS" for Wolmirstedt were introduced for the then existing districts. With the 1st district reform in Saxony-Anhalt in 1994, these identifiers were abolished and replaced by the new identifiers "BÖ" for Bördekreis and "OK" for Ohrekreis. The "BÖ" was a novelty, because combinations that differ only in the umlaut and the associated vowel were not provided. The “BÖ” for Bördekreis could be confused with “BO”, the symbol for the city of Bochum .

On November 1, 2007, the “BÖ” and “OK” indicators were changed again. The new district prevailed with its demand to receive the combination "BK", which was used by the district of Backnang (Baden-Württemberg) until 1973 . Thus, since 2007, the combination “BK” has been one of the distinguishing marks that have been awarded again since the introduction of the current system in 1956 after being used in another regional authority. The takeover of “BK” also took place in order to give the new district of Börde its “own, new” identification compared to the old district symbols “BÖ” and “OK”.

Once in the region forty to Backnang years, the "WN" indicator for Waiblingen in the Rems-Murr was used, it is in the course of by Mark liberalization possible reactivation of the former mark allowed since December 2, 2013 at the Murr again, to use the "BK". This is the first time a license plate is issued in two different federal states. The Rems-Murr district initially only has access to just under 60,000 BK combinations.

In the district of Börde, the previous license plates (BÖ, HDL, OC, OK, WMS, WZL) have been approved again for the aforementioned reason, so that a total of seven variants are available here. 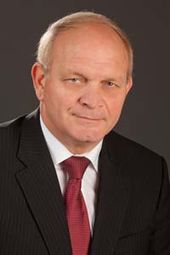 On April 22, 2007 Thomas Webel ( CDU ) was elected District Administrator with 50.1 percent of the valid votes . He was previously district administrator in the former districts of Wolmirstedt (1990–1994) and Ohrekreis (1994–2007). The district council election required after Webel's appointment as Minister for Regional Development and Transport in the Haseloff I cabinet took place on July 10, 2011. Since none of the candidates had the required absolute majority in the first ballot, a second ballot was necessary. This runoff election took place on August 7, 2011, which the CDU candidate Hans Walker won with 58.8% of the votes cast. The turnout was very low with 13.3% of those eligible to vote.

After Walker was no longer nominated by his party as a candidate for the upcoming district election in October 2017, his party colleague Martin Stichnoth ran instead . On March 18, 2018, Stichnoth received the majority of the votes cast in the district election with 48.8%, but missed the required majority, so that a runoff on April 8 was necessary. This time he received 70.9% of the votes cast. The turnout was 28.5% in the first ballot and 17.6% in the second ballot.

The coat of arms was designed by the Magdeburg heraldist Jörg Mantzsch based on a template by Joachim Hoeft and approved by the Ministry of the Interior on August 8, 2007. Blazon : "occluding In Red on horseback silver warriors lowered gag lance in his right hand and with the round shield on the left arm to the top of the belted sword, the bridled Silver Stallion border on a winding to meander silver snake whose head is on the left plate edge lowers down into the base of the shield ( Hornhauser rider ). In 1874 the Dietrich brothers encountered resistance while deep plowing their field near Hornhausen, around 5 km northwest of Oschersleben, which, when removed, turned out to be the picture stone in the format 66 × 78 cm with the previously described mounted warrior. On the basis of the motifs shown, the origin of the Reiterstein can be assigned to the middle of the 7th to the beginning of the 8th century. "

Flag of the district of Börde

In 2007 the district of Börde decided to fly a flag.

The industrial focus, influenced by the immediate proximity to the state capital Magdeburg, is in the east of the district, where high-performance companies have settled in the industrial areas near Barleben via Irxleben , Hermsdorf to Sülzetal (Magdeburg's Speckgürtel ). There is a large potash mine near Zielitz . The Zielitz potash plant is the largest industrial enterprise in the district and the largest potash mine in Germany. In the sugar village Kleinwanzleben one of the two sugar factories in Saxony-Anhalt has its location. The farms located in the Magdeburger Börde, which mainly grow sugar beet and wheat, are among the most profitable in Germany. One of the largest employers in the industrially underdeveloped north is the Bundeswehr , which operates a large military training area in the Colbitz-Letzlinger Heide. Wind power plants are also gaining in importance ; with more than 310 units, the Börde district holds the top position in Saxony-Anhalt. One of Germany's nuclear waste interim storage facilities is located in the western town of Morsleben . Economic power decreases sharply to the west and north. Residents between Oebisfelde and Flechtingen often commute to the west, e.g. B. to the border VW plant in Wolfsburg.

In the future atlas 2016 , the district of Börde was ranked 344 out of 402 districts and urban districts in Germany, making it one of the districts with “future risks”. 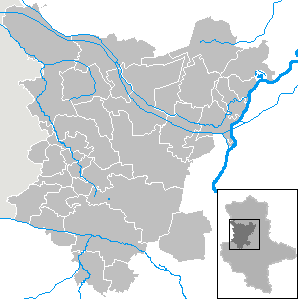 Unified municipalities
(cities arehighlighted in bold )
(* seat of the district)

There are 14 designated nature reserves in the district (as of February 2017).

See also : List of nature reserves in the Börde district

Changes at the community level

The number of congregations decreased from 112 to 44 on January 1, 2010, and to 43 on the following day due to the establishment of new congregations and incorporations.

As a result of incorporations, the number of municipalities decreased from 43 to 35 on September 1, 2010.

On January 1, 2009, the number of administrative communities decreased from nine to eight.

On January 1, 2010, the number of administrative communities decreased from eight to one.

On September 1, 2010, the last administrative community was dissolved

Counties and independent cities in Saxony-Anhalt