This article describes the district of Weferlingen in Saxony-Anhalt. A district of Dettum in Lower Saxony also bears this name.

The Weferlingen area is part of the town of Oebisfelde-Weferlingen in the Börde district in Saxony-Anhalt .

About one and a half kilometers from the town center, a good 500 meters from the edge of the building, the zone boundary between the Soviet and British occupation zones and since 1949 the inner-German border has been located west of Grasleben .

The following are identified as living spaces in the Flecken Weferlingen district :

At the time of the first documentary mention in 1239 as Bleck , the village was comparatively far advanced in its settlement development. From the 14th century to 1648 it was under the jurisdiction of the Halberstädter Stift , but was fought over by Braunschweig, Brandenburg and Magdeburg. The Weferlinger castle and other goods in the village belonged to the von Honlage family in 1241. After the castle was conquered by Duke Albrecht von Braunschweig in 1316, it is later proven again as a fiefdom of von Honlage and came under the administration of the Halberstadt bishop at the beginning of the 16th century. As a sovereign office, it was often given as pledge, for example from 1650 to 1662 to the Swedish General von Königsmarck . The Swedish general was soon replaced by Prince Friedrich II of Hesse-Homburg , the equestrian general known as Prince von Homburg , to whom the extensive reconstruction of the Weferlinger Castle can be traced back.

It was not until 1701 that Weferlingen became a sovereign domain office again after the pledge had been repaid. Five years later, as part of the Schönberg Treaty , King Friedrich I gave the town to Margrave Christian Heinrich von Bayreuth-Kulmbach , who came from a Hohenzollern branch, in return for relinquishing the relatively vague inheritance claim to the margraviate Brandenburg-Bayreuth at the time . The agreement lifted the sons of the late Marquis, with the support of the Frankish Empire circle already in 1722 in agreement with Frederick William I again. In 1716, Georg Friedrich Karl von Bayreuth gave up Weferlingen as the place of residence, which then came back into state administration. In 1751 it was leased as a sovereign domain including the office of Georg Wilhelm Wahnschaffe and managed by the Wahnschaffe family until 1861. The domain office then became the property of von Spiegel in Seggerde .

For a long time, Weferlingen was considered to be a patch that did not have its own fortifications or a more pronounced self-administration. With the potash mining started at the end of the 19th century , Weferlingen gained in importance. In 1877 a sugar factory was built and in 1895 it was connected to a branch line to Helmstedt . The population was around 3,600 in 1910 and rose to around 4,800 by 1946.

In 1903 the Freiherr-vom-Stein-Gymnasium was founded in Weferlingen as a preparation institute .

In the town hall of the place is a branch of the city administration.

Hans-Werner Kraul ( CDU ) was mayor of the former municipality from May 6, 2001 to December 31, 2009 and until his election as full-time mayor of the city of Oebisfelde-Weferlingen, the local mayor of Weferlingen. The local council elected Dirk Kuthe ( SPD ) from among its members as the new local mayor.

According to the last local election on June 7, 2009, the council had 14 members. Due to the founding of the city of Oebisfelde-Weferlingen, the local council automatically became a local council. The turnout was 44.9%. The choice brought the following result:

The coat of arms was approved on July 19, 1996 by the Magdeburg Regional Council.

Blazon : "In blue a rooted golden oak with silver fruits and golden capsules."

The coat of arms was designed by the Magdeburg heraldist Erika Fiedler .

Until 1996 Weferlingen had a different coat of arms, a green oak on a silver shield.

The flag is striped yellow-blue (1: 1) and has the coat of arms in the center.

Weferlingen has had a town partnership with the Bulgarian Swilengrad since 2000 . 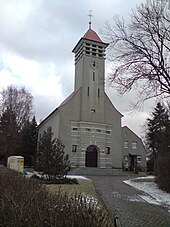 Weferlingen was on the Helmstedt – Oebisfelde railway line opened in 1895 . The Haldensleben – Weferlingen railway line was opened in 1907. The inner-German border changed the situation. The traffic to Helmstedt and Oebisfelde was stopped in 1945, the line was only used for train journeys. There was only a rail connection in the direction of Haldensleben. In 1995 the line towards Helmstedt was rebuilt, since then it has only been used for freight traffic. The line to Haldensleben is now only used by the Lappwaldbahn for freight traffic. Passenger trains ran here until May 29, 1999; From 1945 to 1961 they connected Döhren station to the inner-German border via Weferlingen on the Reichsbahn line towards Oebisfelde .