The title of this article is ambiguous. Further meanings are listed under Haldensleben (disambiguation) . 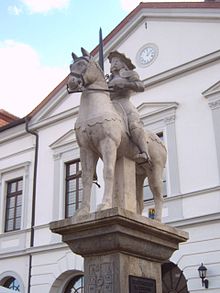 The place has its greatest extent in north-south direction and rises in the southwest to over 90 meters height.

The city of Haldensleben is divided into three districts:

The following districts are identified:

The following are designated as places to live in the city:

Surprisingly, more than 130 patinated flint artefacts, mainly cuttings , have been plowed out of a field near Haldensleben since 2017 . They were located in layers of sand that were formed on moraines when glaciers melted and show features of old and middle Paleolithic tools. Since they can be assigned to the Saale glaciation, their age is between 400,000 and 130,000 years; they are likely to be assigned to one of the warm phases in which people, possibly Neanderthals , visited the area otherwise made uninhabitable by ice masses.

Haldensleben was first mentioned in a document in 966. It appears as “hahaldeslevo” in a document in which Emperor Otto I enfeoffed a certain Mamaco with the county of Haldensleben . Neuhaldensleben was a merchant settlement of the Burgwartfeste Althaldensleben in Northern Thuringia , which was granted market rights in 1150 . The city was destroyed in 1181 after a long siege by Archbishop Wichmann of Magdeburg . The siege was only successful because the attackers dammed up their ears and flooded the city. Since 1215 Haldensleben belonged to the Archdiocese of Magdeburg . In 1223 the reconstruction of the city of Neuhaldensleben began. The Cistercian convent Althaldensleben was founded in Althaldensleben in 1228 , a foundation by Archbishop Albrecht I. In 1277 the first city council was formed in Neuhaldensleben. In 1526 the market rights were granted again and in 1541 the Reformation was introduced. In 1636 the plague claimed over 2,000 victims, and in 1661 a major fire destroyed 60 houses.

The Lüneburger Heerstraße once ran through the town , a trade route that has existed since the Middle Ages and led from Leipzig via Calvörde and Braunschweig to Lüneburg .

Since 1680 Neuhaldensleben, as a so-called Immediatstadt, was directly subordinate to the Brandenburg-Prussian Duchy of Magdeburg and was in the Holzkreis until 1807 . During this time (1701–1703) the construction of the town hall, which was later converted into a classicistic style, also fell. Under Napoleon, the area of ​​the Duchy of Magdeburg west of the Elbe was assigned to the Kingdom of Westphalia of his brother Jérôme , with Halberstadt becoming the seat of the Saale department . In 1810 the monastery was abolished. The buildings were sold to Johann Gottlob Nathusius , who drove the industrialization of the villages of Althaldensleben and Hundisburg. The ceramics industry and agricultural machinery were founded, and a sugar factory , the second in Germany to produce sugar from beetroot , was built. After the Congress of Vienna Neuhaldensleben became Prussian again, from then on it belonged to the newly created Province of Saxony and in 1816 became a district town.

In 1938, after the Mittelland Canal went into operation , Alt- and Neuhaldensleben were merged to form Haldensleben. During the National Socialist era , the doctors and nurses at the regional hospital took part in the National Socialist murders , which killed 41 patients between 1941 and 1945. On April 10, 1945, around 1,600 concentration camp prisoners from the Mittelbau-Dora camp were driven through the city in two marching blocks towards Bülstringen . On April 13, 1945, units of the United States Army occupied the city. In the course of this, three canal bridges were blown up. The US flag fluttered over the town hall. After the American occupation had been replaced by the British military administration on June 1, 1945 , the Red Army entered Haldensleben on July 1, 1945.

In 1950 the city was expanded to include industrial areas in the east and residential areas in the south. In 1963 Albertine Plock, granddaughter of Wilhelm Grimm , left part of the estate of the Brothers Grimm to the district museum (see Grimm exhibition in Haldensleben ).

The city expanded through the incorporation of Wedringen (1991), Satuelle (1992), Uthmöden (1992) and Hundisburg (1994). In 1992/93 the industrial area Haldensleben Ost was completed. The city won gold in the 2005 competition Our city is blossoming . In 2006 and 2008, Haldensleben was also voted the most family-friendly municipality in Saxony-Anhalt and in 2011 “Municipality of the Year” in Saxony-Anhalt. On January 1, 2014, Süplingen was incorporated with its district of Bodendorf.

Population development of Haldensleben from 1998 to 2017 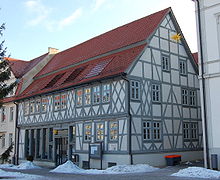 Town house on the market square

The coat of arms was approved on September 8, 1995 by the Magdeburg Regional Council.

Blazon : “In gold a blue castle with two four-window towers with red pointed roofs and knobs, connected by a tinned wall with an open black gate and golden gate wings; between the towers is an upright black key with a beard to the right. "

This coat of arms, which was later included in the council seal, probably dates from the time when Haldensleben received city rights from Heinrich the Lion . While the castle points to the fortifications and defenses of the city, perhaps also to Haldesleva Castle, which was already mentioned in a document by Emperor Otto I , the key probably indicates the location between Altmark and Magdeburg Börde: Haldensleben is the key between Altmark and Börde.

The coat of arms was designed by the Magdeburg municipal heraldist Jörg Mantzsch .

The flag of the city shows the colors blue / yellow with the applied city coat of arms.

Historic old town with medieval town center and almost completely preserved, 2.1 kilometer long town wall, Bülstringer and Stendaler gate towers (both 13th century) and the classicist town hall of Haldensleben . In front of it are the Haldensleber Roland and the Breite Stein , a stone presumably historically used for judicial purposes. Only small remains of the Hagentor , which used to be part of the medieval defense system , have survived. Other sights include the Kühnesche Haus , a magnificent half-timbered building from 1592, and other historic half-timbered buildings such as the Repssche Haus and the Behrendssche Haus . The Templar House from 1553 is the oldest preserved half-timbered house in the city; it was the city courtyard of the Knights Templar in the 13th and 14th centuries. The oldest preserved building in the city is the Bülstringer Gate Tower, which was built between 1240 and 1269. In addition, are remarkable: St. Mary's Church (13th century), Kreismuseum with partial remission of the Brothers Grimm in the Grimm exhibition Haldensleben , synagogue Haldensleben that Grüttefiensches house on the market that Schinkel simultaneous church Althaldensleben that as vocational School used former Cistercian monastery Althaldensleben, the landscape park Althaldensleben-Hundisburg with rare plant species, the largest large stone burial ground in Northern Europe with numerous large stone graves in the Haldensleber forest , baroque castle Hundisburg with baroque garden and concert barn, technical monument Hundisburg brickworks (production of historical bricks. Museum), monument for the victims of fascism in the old city cemetery , memorial plaque in the forest cemetery for the victims of the T4 campaign , honorary cemetery on Magdeburger Strasse with graves of 87 forced laborers and prisoners of war from different nations, memorial stone for the Jewish victims of the Shoah on the former Jewish en cemetery on the Trendelberg ; Graves in the cemetery of the Wedringen district for unknown concentration camp prisoners and forced laborers.

Haldensleber Marienkirche behind the town hall

There are eight churches in the city area:

The sports club Haldensleber SC is based in Haldensleben. Founded in 1910 as Sport-Club Viktoria in Neuhaldensleben in 1910, the sports club survived a dissolution, several renaming and mergers. In 2005, the Althaldensleber sports club, which was only merged in 1998, split off from HSC in order to re-establish itself under the name ISV Haldensleben at its old venue on Lindenallee.

Haldensleben also has the Rolli-Bad sports and leisure pool, as well as two skate facilities and a BMX facility.

The old town festival takes place on the last weekend in August. In 2001 the Saxony-Anhalt Day was held at the same time . Other events with a supraregional reputation are the international SommerMusikAkademie Schloss Hundisburg in July / August, Grimm / Museum Day and art symposium in June, market spectacle on the second weekend in October, regular events at Schloss Hundisburg, star market from 2nd Advent, Whitsun festival, and a Children's festival in May.

Haldensleben is on the B 71 Magdeburg - Salzwedel - Uelzen and the B 245 Halberstadt - Haldensleben. Oebisfelde , the B 1 and the B 189 can be reached via state roads . In addition, the nearby federal motorways have 2 and 14 exits to Haldensleben. There are also plans to build the new B 245n as a south-western bypass and access road for the Südhafen industrial park, which was newly developed in 2009, as well as the new construction of Bundesstraße 71 as a bypass for the Wedringen district and feeder for the planned A 14 north extension (Magdeburg - Schwerin ).

There are several connections to the federal waterway Mittellandkanal , adapted to the respective requirements, at the ports of Haldensleben .

Regional trains on the Magdeburg - Haldensleben - Oebisfelde - Wolfsburg line stop at the station every hour (between Haldensleben and Wolfsburg every one to two hours). The station is also used for freight traffic.

The public transport system is, among other things by the PLUSBUS of the country's network of Saxony-Anhalt provided. The following connections lead from / through Haldensleben:

The urban and regional bus transport is carried out by the BördeBus Verkehrsgesellschaft .

Part of the BBS district Börde

In 2013, Ameos took over the Ohre Klinikum, a basic and standard care hospital with around 270 beds, from Sana . It has a prostate cancer center certified by the German Cancer Society in 2010. The clinic offers consultation hours in Wolmirstedt and operates an ophthalmologist center in Magdeburg.

The editorial office of the Haldensleber Volksstimme, a local edition of the regional daily newspaper Volksstimme, is located at Magdeburger Straße 10 .