Flechtingen is a municipality in the Börde district in Saxony-Anhalt . It is a member community and at the same time the headquarters of the Flechtingen community . Flechtingen was officially recognized as a climatic health resort in 1999 .

Flechtingen is located in the north-west of the state of Saxony-Anhalt in the area of ​​the densely wooded Flechtinger ridge . Except for an opening to the north, the place is surrounded by forests. In the local area is the 13 hectare castle pond , which is fed by the Spetzebach flowing to the north. While the town center is between 96 and 100 meters above sea level, the terrain rises to 130 meters in a westerly direction. Agriculturally usable areas are to the east and north of the village. In the southwest there is a hard rock deposit that has been used for centuries.

The following districts belong to the municipality of Flechtingen: 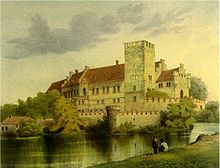 Flechtingen is one of the oldest places in the Altmark . It is mentioned as early as 961 in a deed of donation from King Otto I intended for the Magdeburg Moritzkloster and at that time belonged to Northern Thuringia . By the 12th century at the latest, Flechtingen had been in the possession of the Halberstadt diocese , which gradually gave the place to the originally Magdeburg Schenck family as a fief. In 1307 the Schencken were named as the owners of the moated castle, the first mention of the castle. The family, initially called Schenck von Dönstedt , later took the name Schenck von Flechtingen . In the course of the 14th century, Flechtingen became the sovereign property of the Brandenburg margraves , under whom the Schencken von Flechtingen in 1442 became treasurer and treasurer. Been in 1436 as one of the eight closed worn- called families of the Altmark, together with the Alvensleben , Bartensleben , Bismarck , Jagow , von dem Knesebeck , Platen and von der Schulenburg , the immediately the governor were under and the Emperor and the Marquis as belonging to the army able got the title noble .

In 1483 the castle and village were almost completely destroyed by a large fire. However, the von Schencks began rebuilding in the same year. During the Thirty Years' War the village was between the fronts of the imperial and Danish troops. In the summer of 1629 Wallenstein occupied the place, which on August 1, 1631, including the castle, was completely looted by his soldiers.

Since the 16th century, Flechtingen was administratively subordinate to the Holzkreis of the Archbishopric of Magdeburg . After the secularization of the archbishopric, the duchy of Magdeburg exercised sovereign power until it passed into the Kingdom of Prussia in 1701 . From 1807 to 1813 the place belonged to the canton of Calvörde of the kingdom of Westphalia , ruled by Napoleon's brother Jérôme Bonaparte . With the Prussian administrative reform of 1815, Flechtingen was incorporated into the Gardelegen district. The place began to develop industrially. The hard rock deposits of the Flechtingen quarry, which had already been used for the construction of Magdeburg Cathedral, were of great importance. With the opening of the Neuhaldensleben - Oebisfelde railway section in 1872, Flechtingen received its own train station, albeit three kilometers from the town center. This is where the Flechtingen-Bahnhof district emerged over the years.

In addition to the quarry, the Schenck'sche Gut benefited from the rail connection. As early as 1853, Karl Schenck von Flechtingen, the last male member of the landlord's family, died and the Schenck family line died out. In 1869, however, the adoptive nephew Eduard von Peucker received approval to continue running the estate in the future and became the new lord of the manor on Flechtingen. The manor district with estate and Vorwerk had 185 inhabitants in 1910, while the rural community Flechtingen had 878 inhabitants at that time. On September 30, 1928, the main part of the Flechtingen estate (which was previously an independent communal unit) was combined with the rural community of Flechtingen and the Damsendorf suburb with the rural community of Belsdorf. The Schenck'sche Gut existed as a commercial enterprise until 1945. As part of the land reform ordered by the Soviet occupying forces, the land and the castle were expropriated in 1945. The lands were settled and given to new farmers, the castle initially served as living space for bombed-out families and refugees from the eastern regions.

Flechtingen, which had 922 inhabitants in 1939, was occupied in April 1945 first by American and then by British troops. On July 1, 1945, the place was handed over to the Soviet occupation forces. In addition to the land reform, further profound social changes occurred in 1949 after the founding of the GDR. The Flechtingen quarries were nationalized and became part of the state-owned company "VEB Aggregates Haldensleben". VEB MIWOLL , which produces insulation materials, has developed into one of the largest employers . The changes in agriculture were particularly drastic. In the course of the GDR administrative reform of 1952, Flechtingen was added to the Haldensleben district. In the same year three small farmers founded the first agricultural production cooperative (LPG) called "Frieden" in Flechtingen . It gave up again in 1953 due to inefficiency, and it was not until 1960 that after massive pressure from the state authorities, Flechtingen became a “full cooperative”. With this, the remaining breeders of the German precious pig who had been breeding herd books in the 1950s also gave up. The machine-tractor station (MTS) founded in 1952 was of particular importance for the agricultural operations in the surrounding region . In 1964 the number of inhabitants of Flechtingen had increased to 1280.

The political turnaround in 1989 and the reunification of Germany in 1990 once again brought about decisive changes. Agriculture and industry were privatized again, Norddeutsche Naturstein GmbH took over the quarry, Rockwool GmbH took over the mineral wool plant, and the MEDIAN group built two new rehabilitation clinics in 1993 and 1995. From 1990 onwards, Flechtingen was administratively part of the new federal state of Saxony-Anhalt. Plans to convert the moated castle into a hotel have so far failed. After the district reform of July 1, 1994, the place was incorporated into the Ohrekreis , which in 2007 became part of the newly formed district of Börde . Since 1994 Flechtingen was the seat of the administrative association Flechtinger Höhenzug and from 2005 the administrative association Flechtingen . On January 1, 2010, the previously independent communities of Behnsdorf, Belsdorf, Böddensell and Flechtingen merged to form the new community of Flechtingen. This became a member community and the seat of the Flechtingen Association, which was also founded on January 1, 2010.

After the local elections on May 26, 2019 , the local council has 14 members. The turnout was 43.3%. The choice brought the following result:

The coat of arms and flag were approved by the Börde district on August 18, 2015.

Blazon : "In silver on a green Dreiberg covered with a silver corrugated strip, a pinned, black grooved red castle portal, in the open archway a fallen green linden leaf."

The colors of the church are red and white.

Coat of arms of the district

Blazon : "A tinned red wall in silver, behind it a tinned red tower, accompanied by two green chestnut trees growing out of the wall, and blue water in the gate opening."

The blazon goes back to a resolution of the local council of Flechtingen, according to which "now valid and for the place binding insignia to wear. The symbol of the coat of arms is supposed to be the moated castle that characterizes Flechtingen. In the newly created coat of arms, the moated castle is represented by a crenellated tower growing out of a crenellated wall. The tower is accompanied by a chestnut tree. These refer both to the huge and very old trees that line the entrance to the castle, as well as to the scenic location of Flechtingen, which lies on the Flechtinger ridge. "

The coat of arms was designed by the municipal heraldist Jörg Mantzsch and submitted to the approval process. It was approved by the Magdeburg Regional Council on February 26, 1996 and deposited in the Magdeburg State Main Archives in 1996.

Flag of the district

The flag is red and white striped with the coat of arms.

The moated castle Flechtingen is located in an artificially dammed lake in the center of the village and was built on a gray rock. From the 14th century to 1945, the original castle was the seat of the noble Schenck von Flechtingen family. Its current shape goes back to changes in the 19th century. The oldest parts of the building originated in 1300, they include the curtain wall, the palace and the castle keep . The first major changes were made in 1483 when the castle was moved to the west. Late Gothic building elements were added at the end of the 15th century, and 100 years later the complex received changes in the Renaissance style. Around 1600 the former drawbridge was replaced by a causeway. During the last renovations between 1840 and 1890, the moated castle received its historic-neo-Gothic appearance.

After the castle was expropriated, it was initially used as refugee accommodation in 1945. Afterwards it was used as a convalescent home before it was taken over by the border troops of the People's Army in 1958. From 1964 to 1993 the castle was a retirement home. There were then attempts to transform the castle into a hotel, which so far have not led to any results.

The Protestant church of Flechtingen was built at the instigation of Jakob von Schenck between 1722 and 1727 as the patronage church of the noble family, without being given a special name. The building was built from rubble stones and consists of the rectangular hall and the west transverse tower. The tower still contains remains of the former medieval church. Its octagonal curved hood was put on in 1571/72. The interior of the nave, which is covered with a flat wooden barrel, contains numerous furnishings from the old church from 1592. These include the glazed master gallery , the pulpit , which is richly decorated with stucco , and the baptismal font . The organ above the altar was created in 1856 by master organ builder August Troch from Neuhaldensleben . Numerous tombs and epitaphs set up in the church commemorate the von Schenck patronage family. 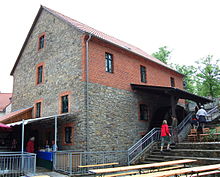 The castle mill, which dates back to 1311, is also remarkable .

Flechtingen is on the Oebisfelde – Magdeburg railway line , and its train station is around three kilometers away. The state roads L 25 and L 43 intersect in the village. Flechtingen has a connection to the A 2 motorway 17 km away via the L 25, and the district town of Haldensleben is 14 kilometers away by road. There is a port of the Mittelland Canal in Bülstringen , which belongs to the Verbandsgemeinde, seven kilometers away .