Family coat of arms of those von Bismarck

Bismarck is the name of an old noble family from the Altmark , which appeared in the 13th century among the city families of Stendal . The family was enfeoffed with goods in the surrounding area and from the beginning of the 18th century also acquired property in Pomerania .

The most important representative of the family was the first German Chancellor Otto Fürst von Bismarck from the Schönhausen line.

The ancestral line of the Bismarcks can be traced back to 1270. The first mentioned representative of the family was the head of the garment tailors ' guild and probably also the mayor of Stendal , Herebord von Bismarck . It took its name from the town of Bismark (Altmark) , an exclave of the Diocese of Havelberg to the west of Stendal - but initially only as a civil designation of origin, because a manual activity was incompatible with the knighthood.

Only his great-grandson, Nicolaus von Bismarck (Klaus), mentioned in 1328 and 1377 , was "probably the first knight-born " of the family. Since a knighthood was only valid for the third generation of knightly living, Herbord's sons (or one of them) may have been knighted and married appropriately. Nicolaus was Stendaler patrician , merchant and alderman , it brought to archiepiscopal of Magdeburg pen captain and eventually to the Margrave of Brandenburg advice and Hofmeister . In 1345 he was enfeoffed by the Wittelsbach Elector of Brandenburg with the Burgstall Castle because of special services in the administrative service .

The Vorwerk Briest also belonged to Burgstall , on which much later, in 1624, the Bismarcks built a castle in the transitional forms from the late Renaissance to the early Baroque, which - after expropriation in 1945 - is now again in family ownership. The place Döbbelin also appears in the land register of Emperor Charles IV as early as 1344 as the property of Nicolaus von Bismarck; today's manor house Döbbelin was built in 1736; This property, too - after expropriation in 1945 - has meanwhile been bought back by the family. One of the oldest possessions in the Altmark was Uenglingen , which belonged to the family from 1375 until the end of the 19th century.

In the 14th and 15th centuries, the von Bismarck families , along with the Alvensleben , Bartensleben , Jagow , von dem Knesebeck , Platen , Schenck (von Flechtingen and Dönstedt ) and von der Schulenburg belonged to the eight families of the Altmark who lived in a castle and who were directly under the governor and were given the title noble by the emperor and the margrave as belonging to the army .

In 1562 she had to exchange the castle and estate in Burgstall for the secularized provost of Crevese in Altmark / Wische as well as the East Elbe possessions of Schönhausen and Fischbeck , on condition that from now on these places were also included in the Altmark . The agreement was called the " permutation agreement ". As a result, the Bismarck-Crevese line emerged , which with Levin-Friedrich and his son August Wilhelm (from the Briest branch) produced a Justice and Finance Minister of Frederick the Great , as well as the Bismarck-Schönhausen line , from which the Reich Chancellor descended. Around 1700 Schönhausen was divided and a new mansion was built on each part of the estate, of which only the Schönhausen II manor still exists.

August Friedrich von Bismarck-Schönhausen acquired the Kniephof and Jarchlin estates from the von Dewitz family in 1725 in the Naugard district of Lower Pomerania, as well as Külz in 1727 , creating a second focus of ownership in Pomerania alongside the Altmark. The Pomeranian estates were administered together with Schönhausen I, including Otto von Bismarck, before he began his political career.

In 1817, through the marriage of Theodor Alexander von Bismarck with Caroline Countess von Bohlen, the Count's branch Bismarck-Bohlen at Karlsburg Castle in Western Pomerania , where other goods were acquired. In 1818 King Friedrich Wilhelm III. Theodor Alexander in the hereditary count status .

Another branch of the counts emerged in 1865 when the Prussian Prime Minister Otto von Bismarck, Lord of Schönhausen I (Altmark) and Kniephof (Western Pomerania), rose to become Count of Bismarck-Schönhausen ; With a corresponding donation , he acquired the Varzin estate in Pomerania . In 1871 he was raised to the primogenic hereditary prince status as the first Reich Chancellor in recognition of the establishment of an empire and received the Sachsenwald east of Hamburg as a donation, based in Friedrichsruh , which still belongs to the princely line to this day. Their younger relatives bear the name Graf / Gräfin , while the head of the Schönhausen line carries the former first-born title of prince in non-official social relations .

Coat of arms of those von Bismarck ( Renaissance style)

The family coat of arms shows a golden shamrock decorated with three (2: 1) silver oak leaves in blue. On the helmet with blue-silver covers a golden crown of leaves wedged between two blue-silver (also silver-blue) buffalo horns divided across the corner .

The coats of arms of some lines, or later " improved coats of arms ", are different. The coat of arms seal of Ludolf von Bismarck from 1465, for example, shows eight-ended deer antlers as a helmet ornament . 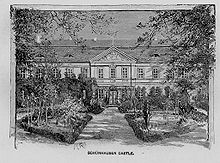 The following ranks were raised for Reich Chancellor Otto von Bismarck (1815–1898), who came from the Schönhausen line :

In 1350, Nikolaus von Bismarck, together with the brothers Johann and Burkhard Sweder, founded the Sankt-Gertrud-Hospital zu Stendal, which is located in front of the Uenglinger Tor . The hospital was used to receive poor pilgrims and travelers. The founder Klaus I. von Bismarck reserved the patronage of the Sankt-Gertrud-Hospital for himself and for his descendants for "eternal time". This was maintained until 1945 by the estates of Briest, Welle and Schönhausen.

As a result of expropriations in the course of the land reform in the Soviet occupation zone and the expulsion from Western Pomerania, most of the property was lost in 1945. Only Friedrichsruh , located in West Germany, with the Sachsenwald remained as the seat of the princely line of Schönhausen, even if the castle was destroyed in the war. Otto von Bismarck's birthplace, Schönhausen I Palace, was blown up in 1958 at the instigation of the GDR leadership out of ideological hatred of the founder of the Reich.

With Briest and Döbbelin, two important ancestral seats in the Altmark, which had been in the family from 1344 and 1345 until the expropriation, could be bought back by family members after German reunification ; Related descendants bought the Welle manor back. Other agricultural or forestry operations were newly acquired by family members, such as Gut Braunsroda in Thuringia.