The title of this article is ambiguous. Further meanings are listed under Schultheiss (disambiguation) . 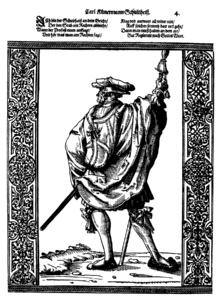 The Schultheiß or Schuldheiß (from Old High German  sculdheizo , performance commanding, cf. Middle Low German  schult (h) ēte , Latinized ( Middle Latin) sculte (t) us , Swabian today still Schultes for “ mayor ”) designates an official provided for in many Western Germanic legal systems who demands guilt : On behalf of his master (sovereign, city lord, landlord) he had to urge the members of a community to perform their duties, i.e. to collect taxes or to ensure that other obligations are observed. Linguistic variants of Schultheiss are Schulte , Schultes or Schulze . In the past, a distinction was made between the Stadtschulzen and the Dorfschulzen . In the city's court and community constitution, he was a representative of the city council or the sovereign to exercise administrative sovereignty and the administration of justice.

The mayor was usually also a judge of the lower courts . In Frisian and Franconian law he was an auxiliary officer of the counts , entrusted with the collection of funds and the execution of judgments, usually also a hundredth leader. Similar or similar official positions were bailiff , village judge, Erbrichter , Fronbote , Gerichtskretscham, Greve , Meier , arbitrator, Vicar , Villicus , Vogt , Woith (in alphabetical, not chronological order).

In French, the mayor corresponds to the Écoutète , in Polish to the Sołtys , in Slovak to the Šoltýs , in Bohemian to the Rychtář , in Dutch to the Schout , in English to the Bailiff or Mayor . 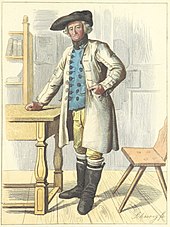 Dorfschulze from the Odenwald around 1847

As part of the eastern settlement , the settlement entrepreneur ( locator ) regularly received the Schulzenamt under other rights, whereby in the village area in addition to judicial powers in general, the function of village authority is also found outside the court constitution. There are all voting modalities: from free choice by the village community to unilateral appointment by the village lord.

The high office of the town mayor goes back to the mayor in the medieval court. In the Sachsenspiegel from the time around 1230 it says: "No judge (who invites the king to a thing ) can hold a real thing without his mayor, to which he should rightly offer ..." (Ssp. I / 59,2). In the cities, the citizenship occupied this office of deputy judge early on, and when the cities also acquired high jurisdiction in the late Middle Ages, the mayor became the city's highest judge and in this way often became the head of the city in general.

Later he could also be the head of an urban (Stadtschultheiß) or village community (Schulze) . During the East German colonization in the Middle Ages, it was mostly knightly entrepreneurs who held this function as inheritance debtors, whereby the office was tied to family or property. In the old settlement area and eastern Thuringia, the official Schulze (lat. Centgreve) appointed by the rulers often held the office for life.

In the old German judiciary (see Thing ) he presided over the lay judges in the court. Since the 15th century, the official title of Schulze was replaced by the official title of judge in various regions (e.g. Saxony) , whereby the judge working in the patrimonial court often also carried the title of court-Schulze. His tasks were originally probably to participate in regional courts, the collection of taxes and services as well as various supervisory rights (possibly also for the area of ​​several villages and differentiated regionally). Since the 16th century, he has been increasingly assigned tasks from the village and community administration, which were formerly carried out by the officials appointed by the local community ( home citizens ). With this, the dualism between lordly and cooperative officials gradually disappeared.

As a Schulze, he was largely the village head in the sense of a mayor in the 17th to 19th centuries . The former “mayor” had the function of today's curator . In Württemberg, for example, the official titles of mayor and mayor were not replaced by mayor and mayor until December 1, 1930.

The office of mayor, which in recent times was conferred by the election of parishioners, but which still required official confirmation, was often associated with the possession of certain goods (Schulzengut, Schulzenlehen, Bauermeisterlehen, in Silesia Scholtisei , Erbscholtisei , Scholten- or Scholzengut) called) connected. The corresponding names for these farms have survived in some cases into the 20th century. Depending on whether the possession of the court Schulz was associated with certain obligations to the state or feudal lord, was between the service freyen mayor , or free mayor , and the service Schulzen distinguished (see also: free judges ) . The agricultural enterprise of a Freischulzen was called Freischulzenhof .

Significance and function in Switzerland

In Switzerland ( German-speaking Switzerland ) the designation Schultheiss for the chairman of the city government was retained beyond the Middle Ages, especially in the cantons ruled by aristocratic patricians (city and state head of the republic) , but then also as the title for the chairman of city courts and other city offices.

Up to the present day the title Schultheiss was used for the annually changing President of the Government of the Canton of Lucerne (Government Council) . With the new Lucerne cantonal constitution of 2007, which came into force in 2008, the term Schultheiss was replaced by the term used in the majority of the German-speaking cantons, government president (see Landammann ). The deputy of the mayor was called the governor until 2008 . The electoral body for the mayor and governor was the Grand Council (new name with the same competence: Cantonal Council ), the parliament of the Canton of Lucerne. The members of the government council, on the other hand, are elected by the people by majority vote.

Schultheiss, moreover, base form of the most common German family name, also in numerous variants, such as Schulz , Schulze , Schulte , Schult , Schultz , Schultze , Schulzeck , Schulten , Schuldt , Schulthess , Scholtes , Schotes , Schultheiss , Schultheis , hot or hot occurs . These forms of writing correspond to the regional pronunciation and spelling for the function and office of the mayor. In addition, the variants from Silesian with O: Scholz , Scholze etc. In Swabian, the word Schultheiss becomes the Schultes . In the early modern period, a number of people changed the name to Latin or as a humanist name to Scultetus , Sculteus or Praetorius . There is also a Czech spelling of the name: Šulc , outside the Czech Republic also Sulc . In Slovakia, the name also occurs in the form Šoltýs or Šoltés (Slovak spelling). In Austria there is then the form Theissl . Another notation was created in Banat the kuk time when Hungarian registrar Schulcz wrote.

The form Schulte can often be found in double names, the second member of the name originally being a court name, e.g. B. Schulze Dalhoff, Schulze Dieckhoff, Schulze Elshoff, Schulte Renger , Schulte Mesum , Schulte Wermeling, Schulze Pellengahr , Bock-Schulz, Schulze-Behn-Bock etc. Another form of the name is Schulte-Bisping, the second name being from the bishop who installed the local mayor.