The title of this article is ambiguous. Further meanings are listed under Weizsäcker (disambiguation) .

Coat of arms of the von Weizsäcker family

Weizsäcker and Weitzsäcker is the name of Palatine - Württemberg sex from the original millers that in - line in the 19th century into the - the Öhringer educated middle class rise. The Tübingen theologian and university chancellor Karl Heinrich Weizsäcker was given the personal nobility in 1861 . His son Karl Hugo was given the personal nobility in 1897 and in 1916 he was raised to the status of hereditary baron as Prime Minister of Württemberg . Family members also held prominent positions in the Weimar Republic , in the Nazi state and in the Federal Republic of Germany.

The best-known representative of the family is the Federal President Richard von Weizsäcker, who died in 2015 .

The Weizsäcker can be traced back to relatives of the 1294 knight Peter Wazach (Wadtsacher), who was a vassal of Count Walram I of Zweibrücken . The even childless Peter Wazach was apparently a member of the Watsacher family from Weilheim in Upper Bavaria , where they owned the Waitzacker estate, which still exists today.

The documented lineage of the family, which probably comes from the Waadsacker Mühle (also Woodsacker Mühle, today Woogsacker Mühle), a former property of Peter Wazach near Niederbexbach , begins with Friedrich Weidsecker, who was born around 1535 and was a miller at Kleeburg in Lower Alsace .

Friedrich Weidsecker's son Friedrich Wadsacker migrated to Waldmohr not far from Niederbexbach before 1610 and took over the Waldmohrer Mühle. His son Nicolaus Weizsäcker (also Waadsecher, Wadsacker, Waidsacher, Waidsecker and Weidtseckher) (1612–1673) acquired his father-in-law's mill, the Bernhardsmühle near Neuenstein , in 1650 , where he became the progenitor of the twelve lines of the family that are flourishing today, most of them a branch of the Öhringer line achieved a remarkable social rise.

The miller's trade , which has been practiced for many generations , dates back to the Middle Ages and was considered disreputable for various reasons. In many places the profession of miller was one of the "dishonest" professions until well into the 19th century . The millers therefore counted among the lower classes and stood on the edge of the class. In some cases, family members pursued this acquisition, which is now an honorable trade, in their ancestral home until recently (as of 1987).

The Öhringer line, one of twelve lines of the family that is flourishing today, goes back to Gottlieb Jacob Weizsäcker (1736–1798). He first learned the miller's trade in what is now Eckartsweiler , a suburb of Öhringen , but then switched to the service of the Counts of Hohenlohe-Öhringen and in 1768 became court cook of the employer who had meanwhile been raised to prince in the Öhringen residence, which has around 3,000 residents . The older son Carl Friedrich Gottlob Weizsäcker (1774-1835) was the city mayor of Öhringen. His descendants remained true to their craft roots and became primarily opticians for generations .

The training of the talented younger son Christian Ludwig Friedrich Weizsäcker (1785–1831) was promoted by the employer, as was not unusual at that time. Although the family fell into poverty after Gottlieb Jacob Weizsäcker's death, the further promotion of the son ensured social advancement. In 1806 the principality was mediatized , and Öhringen was now an upper administrative city belonging to the Kingdom of Württemberg . Christian Ludwig Friedrich Weizsäcker made it to the canon preacher in Öhringen in 1829 after the city pastor had given up the less paid position. Although the preacher was the prince's spiritual advisor, he was only formally prince since 1806, but in reality he was meaningless. Christian Weizsäcker, of poor health, barely exercised his office from the start and died two years later, leaving his 34-year-old widow unsupervised.

Christian Ludwig Friedrich Weizsäcker's successful connection to the educated bourgeoisie , however, seems to have laid the groundwork for further advancement - his wife, as a “distressed widow”, succeeded in admitting his son Carl Heinrich Weizsäcker to the Schöntal seminar in 1839 . In 1859 he became senior consistorial advisor - “the poor boy from Öhringen now had rank and name.” He later became professor of theology and in 1861 he was finally raised to the rank of personal nobility. A younger brother was the later historian Julius Weizsäcker .

Karl von Weizsäcker, who later became Prime Minister of Württemberg, and his family around 1895

From the middle of the 19th century, this branch of the family was firmly rooted in the educated bourgeoisie and has since produced well-known members who shape the image of the widely ramified family in public. Shortly before the end of the German Empire , a member of the Öhringen line succeeded in advancing into the hereditary nobility : Karl Hugo Weizsäcker , Prime Minister of the Kingdom of Württemberg , was only raised to the personal nobility status in 1897 and hereditary baron in 1916 .

The fact that the Weizsäcker family produced civil servants and politicians (Prime Minister, State Secretary, Federal President, Member of Parliament) in four different systems of government ( Imperial Era , Weimar Republic, Nazi dictatorship, Federal Republic) makes them one of the few "political families" in Germany while in in other countries with greater historical continuity (e.g. USA, Great Britain), political families are much more common. Against the background of the very changeable German history, the political philosopher Gerard Radnitzky questions critically and ironically whether the Weizsäcker could possibly speak of an “innate political correctness ”.

The Weizsäcker in the Weimar Republic

The publicist Ralph Giordano attested that the family had an attitude at the time that was not atypical for parts of the nobility and the educated bourgeoisie and that contributed to the failure of the Weimar Republic:

The Weizsäcker in the Nazi dictatorship

Despite an inner distance from National Socialism in terms of educated citizens, a number of well-known members of the family also made careers in the Third Reich . In this context, the following family members of the Öhringer branch should be emphasized:

The diplomat Ernst von Weizsäcker was State Secretary in the Foreign Office under Ribbentrop from 1938 to 1943 , joined the NSDAP when he took office (membership number 4 814 617) and was sentenced to five years imprisonment in the Wilhelmstrasse Trial of Nuremberg against senior officials of the NS state, under partly because of complicity in the deportation of French Jews. His role is controversially discussed by historians, as he tried in vain obstruction to prevent the outbreak of war in the first phase of his term of office, and later had various contacts with the resistance against Hitler, which he did not join.

The physicist and philosopher Carl Friedrich von Weizsäcker was not a member of the NSDAP, but during the Nazi era he worked on the development of nuclear weapons at the Kaiser Wilhelm Institute for Physics in a group that also included Werner Heisenberg and Otto Hahn . At the beginning of the war, Weizsäcker hoped that the uranium project would give him political influence . He developed the theory of the nuclear weapon with plutonium and was one of the main authors of the patent application for a nuclear weapon in 1941. Independent historians conclude that, in comparison to other participants in German nuclear weapons research ( Kurt Diebner , Walther Gerlach ) , Weizsäcker and Heisenberg obviously did not use all the means at their disposal to supply the Nazis with nuclear weapons. On the other hand, the circumstances would not have caused them to interrupt or delay their work, let alone to offer resistance against National Socialism.

Viktor von Weizsäcker , a physician, existential-anthropological theorist of psychotherapy and co-founder of psychosomatic medicine, was not a member of the NSDAP, but he hoped that the Nazi revolution would overcome the societal and social crisis that he felt strongly and believed in his medical ideas could make a contribution to this. In his lectures, among other things, he dealt with the term “doctrine of extermination” and welcomed the law on the prevention of genetically ill offspring . From 1942 to 1944 , Hans Joachim Scherer conducted research at Weizsäcker's institute in Breslau on brains that came from killed mentally handicapped children. According to medical historian Udo Benzenhöfer, it is impossible that Weizsäcker initiated this research and there is no evidence that he knew about the origin of the preparations. The question arises, however, as to whether Weizsäcker "as director of the institute should not have asked how Scherer came up with the large number of preparations."

The Weizsäcker in the Federal Republic 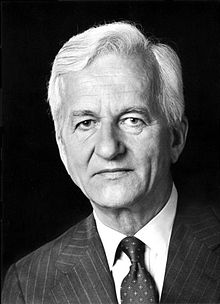 Federal President Richard von Weizsäcker , the speaker on May 8, 1985

In the post-war period, the confrontation with the Nazi era played a major role for the family . Outwardly, the justification of one's own actions was initially in the foreground. This is particularly evident for Ernst von Weizsäcker in the Wilhelmstrasse trial, in which Richard von Weizsäcker worked for his father as an auxiliary defender. But Carl Friedrich von Weizsäcker also developed a strategy of justification, as can be seen in the minutes of the meetings of the physicists interned in Operation Epsilon from Farm Hall . At the same time, the preoccupation with one's own errors and guilt sets in. This is likely to have contributed to the decisive role played by Carl Friedrich von Weizsäcker in the Göttingen Declaration against the nuclear armament of the Bundeswehr.

For the later Federal President Richard von Weizsäcker , the public and private confrontation with the era of National Socialism by his father, his eldest brother and his uncle, in addition to his own almost six years of participation in the war as a soldier, was certainly formative. It can be assumed that this family history also had a decisive influence on his most famous speech as Federal President on May 8, 1985 on the 40th anniversary of the end of the war in Europe and the Nazi tyranny .

The baronial coat of arms after the diploma of 1916 shows three golden ears of wheat in blue on a green ground (corresponding to the family coat of arms of the sex, after family seals since the 18th century, alluding to the family name and the miller profession of the ancestors). A natural birch tree or maypole (this crest ornament because of the wife of the ennobled, a born from Meibom ), grows out of a sloping trunk on the helmet with blue-gold covers .