Waldmohr is a municipality in the Verbandsgemeinde Oberes Glantal in the Kusel district in Rhineland-Palatinate . According to state planning, it is designated as a basic center. Until January 1, 2017, it was the seat of the administration of the then disbanded Verbandsgemeinde Waldmohr .

Waldmohr is located on the northern edge of the West Palatinate moorland , directly on the Saarland- Rhineland-Palatinate border, about 7 km north of Homburg . The Glan flows through the middle of the settlement area and was straightened in 1933 at the instigation of the municipality.

Waldmohr is mentioned for the first time in 830 in the Lorsch Codex as "villa Moraha" , ie village on the swamp stream. In 1449 the place came under the rule of the dukes of Pfalz-Zweibrücken and was subordinate to them until the duchy perished in the aftermath of the French Revolution in 1794. In 1798, under French rule, Waldmohr became the capital of the canton of the same name in the Saar department . This is how the history of the place as the administrative center begins. After the end of the French occupation, the Palatinate comes to the Rhine district in the Kingdom of Bavaria , while Waldmohr remains the canton capital for 57 villages between Kirkel and Glan-Münchweiler . It only lost this position after the separation of the Saar area (later called Saarland) , after the First World War , during which the Homburg district office was largely transferred to the Saar area. In 1920 the place is therefore subordinated to the district office of Kusel and seat of a district office branch. In 1946 it was incorporated into the newly created state of Rhineland-Palatinate and in 1971 received back part of its previous competencies as the seat of the Waldmohr community .

The municipal council in Waldmohr consists of 22 council members, who were elected in the local elections on May 26, 2019 in a personalized proportional representation, and the honorary local mayor as chairman. 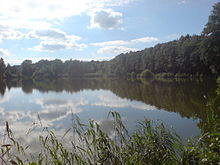 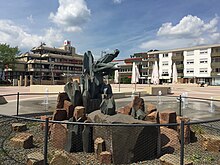 Waldmohr has a wide range of sports clubs. As a special feature, the handball club HSV Waldmohr belongs to the Saar handball association despite its location in Rhineland-Palatinate .

The Westricher Madrigalchor is a mixed choir that emerged from the singers' association in 1998.

The “Bruchwiesen Waldmohr” recreation area is located in the municipality, in whose area the Glan is being renatured.

Today Waldmohr lives mainly from industrial and craft businesses. It is the largest industrial site in the Kusel district . The largest employers are a furniture factory (CS Schmal, around 590 employees, insolvent since 2018) and a mechanical engineering company that also deals in aluminum profiles (around 260 employees).

Entrance building of the Jägersburg station, which also served the community of Waldmohr and whose name was the main reason for controversy

The public transport in the transport association Rhein-Neckar integrated (VRN). The Glantalbahn , which used to run through Waldmohr, has been closed in this area. Waldmohr and the neighboring village of Jägersburg owned a train station on it , the name of which had always caused a dispute due to its location. So he was in the Jägersburg district, but closer to the Waldmohr settlement area. Until 1905 it was called Jägersburg-Waldmohr , from 1905 to 1912 and from 1936 to 1947 Waldmohr-Jägersburg and from 1912 to 1921 Waldmohr and from 1921 to 1936 and from 1947 Jägersburg . This was given up for passenger traffic in the mid-1950s. In 1967 the Waldmohrer industrial area received a siding.

After passenger traffic in this area ended in 1981, the main line between Waldmohr and Schönenberg-Kübelberg was dismantled in 1989 . The driving force was the community of Waldmohr, as they wanted to tear down a railroad overpass at the entrance to the village to enable trucks to pass through. The Glan-Blies-Weg is now on the railway line from Waldmohr to Glan-Münchweiler . Even before the Glantalbahn was officially opened, the so-called Nordfeldbahn went into operation in 1903 , which ran from the said station through the middle of the Waldmohr buildings up the Glan to the Nordfeld pit . In this context, the Glantalbahn section Homburg – Jägersburg was unofficially put into operation with the opening of this freight railway. The aforementioned pit had to close due to a lack of profitability, which is why the railway line was also discontinued after only two years of operation. During this time, the so-called Landdebitbahnhof , which was responsible for the land sales of the mine, was located in the center of Waldmohr .

The next railway line is now the Mannheim – Saarbrücken connection, about six kilometers south of Waldmohr . Buses society regional bus Saar-Westpfalz connect Waldmohr with the stations Homburg , Bruchmühlbach-Miesau and Landstuhl on this route. The district town of Kusel and Glan-Münchweiler on the Kusel – Kaiserslautern railway line can also be reached directly by bus.

Waldmohr has a junction (and a rest stop with a motel ) on the federal motorway 6 ( Saarbrücken - Waidhaus ) - also known as " Via Carolina " - and is thus not only connected to national German road traffic, but also to France and the Czech Republic . In addition, the federal road 423 ( Mandelbachtal - Altenglan ) runs through the town and thus provides a regional connection in the Saar and Palatinate area. Landesstraße 354 , which has its starting point in Frohnhofen , as well as district roads 2 and 3 , which begin on the border with Saarland , also ends in Waldmohr .

The Rothenfeld School is a connected elementary and secondary school plus . Since the 2007/2008 school year, it has been the only school in Rhineland-Palatinate to offer full-day care during the holidays.

Cities and municipalities in the Kusel district