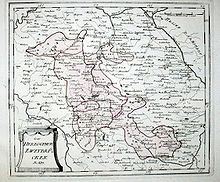 Under Ludwig I, who led four unsuccessful feuds against Electoral Palatinate , Lambsheim, Wachenheim and the temporarily acquired office of Waldböckelheim were lost to Electoral Palatinate. The residence had to be relocated to Zweibrücken in 1477 because the Palatinate population threatened Bergzabern and Meisenheim. Under Alexander and Ludwig II, the primogeniture rule was introduced, according to which the principality should henceforth be inherited by the eldest son. Under the guardianship of Count Palatine Ruprecht , Bischweiler was acquired in 1542 ; In 1544 the branch line Pfalz-Veldenz split off. Pfalzgraf Wolfgang could rehabilitate the state revenue by the secularization of monasteries in his territory and acquired from the 1553/59 Kurpfälzer inheritance Neuburg , half of the rear county Sponheim and half of the rule Guttenberg, making it more than doubled its territory. From the huge gain he endowed his five sons with their own principalities in his will, Pfalz-Neuburg, Pfalz-Zweibrücken, which fell to the second son Johann I in 1569, as well as the non-sovereign branch lines Pfalz-Sulzbach , Pfalz-Vohenstrauß-Parkstein and Pfalz-Birkenfeld .

Since the Wittelsbach family from Zweibrücken had been closely related to the Swedish royal family ( House Wasa ) since the 16th century , there was a personal union with the Swedish throne from 1681 to 1718 .

Initially Meisenheim was the residence city , then in 1477 Zweibrücken advanced to the capital of the duchy and remained so until 1793. The dukes' seat was initially buildings that are destroyed today, since 1725 the ducal castle in Zweibrücken and finally after 1778 the castle Karlsberg near Homburg , which also claims of the Duke to represent the succession in the Duchy of Bavaria . The ducal family chose the castle church in Meisenheim and later the Alexander church in Zweibrücken (which was badly destroyed in the Second World War) as their burial place . 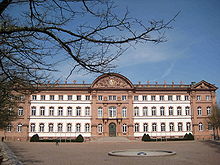 In the area of ​​the duchy there was no authority that would have restricted the ducal power. Until it was repealed by Johann I on April 21, 1571, serfdom also applied to the urban population, which was somewhat relaxed in the city of Zweibrücken by decrees from 1352 and 1483. The male youth had six years of compulsory service in the country militia.

The highest state authority was the Cabinet College , in whose meetings the Duke also took part. The ducal rent chamber was responsible for finances, mining and forestry. A separation of justice and administration did not exist, jurisdiction was usually by the bailiffs and Schultheiße exercised. The highest court instance was the appellate court in Zweibrücken, whose tradition is continued by today's higher regional court. Since 1774 it was the last instance, an appeal to the Reich Chamber Court was no longer possible. The main legal basis was the court court order of 1605 and the subordinate court order of 1657, later the criminal code of 1724 as well as marriage and guardianship regulations. As far as there was no state law, the Reich Chamber of Justice rules applied. In the Alsatian parts of the country, in which France had claimed sovereignty since around 1680, the Conseil sovereign d 'Alsace in Colmar was the highest legal instance .

View of Zweibrücken after a painting by Theodor Verhas

The duchy, like the entire Left Bank of the Rhine , was conquered by French revolutionary troops after 1792 in the First Coalition War . In 1798, the region was annexed to French territory and most of the duchy was assigned to the newly established Donnersberg department. The transition to France was recognized under international law by the Peace Treaty of Lunéville (1801) . Due to the agreements reached at the Congress of Vienna (1815) and a state treaty concluded with Austria , the area (but not the Alsatian parts of the country) came back into possession of the Wittelsbachers in 1816 , who united it with their other Palatinate possessions to form the Palatinate (Bavaria) .

After several local reformatory initiatives in the 1520s , the first reformatory church ordinance was enacted in 1533 under the guardianship government for the underage Duke Wolfgang by Count Palatine Ruprecht , his uncle Wolfgang , written by the court preacher and later city pastor Johann Schwebel . Theologically, Schwebel followed the Strasbourg Reformation under Martin Bucer . After Schwebel's death (1540) and when Wolfgang took over the government (1544), Lutheran influence grew in Zweibrücken , which was established in 1557 by the great church ordinance drawn up by then Chancellor Ulrich Sitzinger . After Wolfgang's death, however, his son Johann I converted to the Reformed Confession in 1588 , which existed in the normal year of 1624 and was recognized under imperial law in the Peace of Osnabrück in 1648 . In the years of the French Reunion 1680–1697 Catholic parishes were again admitted and after the Peace of Rijswijk in 1697, Lutheran parishes were again founded under Swedish administration.

In terms of administration, the Reformed Church was structured in the same way as the state authorities: The administrative districts corresponded to the superintendent's offices (church districts or deaneries) each with a superintendent or inspector (in the Reformed period) at the top. The pastors were state officials, the regular visitations were carried out by a commission consisting of a superintendent, a (secular) bailiff and an envoy from the central administration in Zweibrücken. There was no state bishop or church president of the modern type, but the superintendent von Zweibrücken actually had a prominent position. Parish conventions of the individual church districts took place at regular intervals, and occasionally synods of all clergymen in the duchy. There was also initially no institutionalized church council; this function was exercised by the secular cabinet college with the assistance of the superintendent (s). In the 18th century, however, such a body was set up, which in turn included secular councils.

Coat of arms of Pfalz-Zweibrücken around 1720

Pfalz-Zweibrücken introduced a coat of arms with symbols of the United Duchies of Jülich-Kleve-Berg in 1720 . Blazon: Has a crowned lion in a white field for the coat of arms. It is true that the whole coat of arms consists of an attached shield, the front part of which is squared, and in the 1st and 4th field the Palatine lion; leads the Bavarian awakenings in 2nd and 3rd; the rear part, however, split twice, and once divided, and contains the coats of arms from the Jülich succession, as the Jülich lion, the Clevian lilies, the Bergian lion, the Märkian chess beam, the Ravenspergian spear beam, and the Mörsische Zwerchstrasse; In the middle of this main shield, however, lies the grave Veldentzian shield, with a crowned lion, in the white field.