The title of this article is ambiguous. Further meanings are listed under Lich (disambiguation) .

Lich is a town in the central Hessian district of Gießen , 15 kilometers southeast of the university town of Gießen . 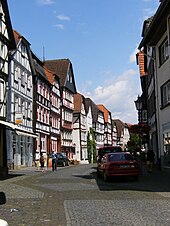 The upper town with its half-timbered facades

In addition to the core city, Lich also includes the districts, each with the population as of January 2017.

Lich - Excerpt from the Topographia Hassiae by Matthäus Merian 1655

Tools from Neanderthals (around 100,000 BC) were found in the fox holes near the forest swimming pool. In the area of ​​the Kolnhausen court, people of the Aurignac type left their tools 50,000 years later. Linear ceramics , one of the oldest rural cultures of the Neolithic , settled around 4000 BC. BC on the loess-rich bank of the weather around Lich. Other sparse finds come from the Bronze Age and the Hallstatt and Latène Ages . Whether the Celts were also settled in the area around Lich is still controversial today. What is certain is the presence of the Romans on the Rhine  - who formed the border of the Roman Empire here - since 49 BC. Chr .; the chats are recorded in Hessen at the same time.

During the construction of the Limes in 83-85 AD by the Romans, the Arnsburg cohort fort was built in the area of ​​today's Arnsburg district. It was the northernmost cohort fort of the Wetterau Limes.

Lich was first mentioned in the Lorsch Codex in 790 as "Lioche". In the 9th century, the Lorsch monastery withdrew from the Wetterau and the diocese of Mainz took its place, but the Fulda monastery also received goods in Lich. In the 12th century Kuno I von Munzenberg founded the Arnsburg monastery, administered by the Cistercians. In 1300 Lich received as a special favor for Philip III. von Falkenstein granted city rights by King Albrecht . It remained with the Falkensteiner family until the second half of the 14th century, when it fell to the Counts of Solms . Lich survived the Thirty Years' War as well as the Second World War without major damage.

In the course of administrative reform in Hesse , the communities were on 31 December 1970 to voluntarily Birklar , Muschenheim , low-Bessingen , upper Bessingen on 1 February 1971, Eberstadt 1971 and December 31, Bettenhausen in the city Lich incorporated . On January 1, 1977, was carried inclusion of communities Arnsburg and Langsdorf by the law on the restructuring of Dill circle counties Giessen and Wetzlar and Giessen . For all formerly independent municipalities, local districts with local advisory councils and local councilors were set up in accordance with the Hessian municipal code.

The following list gives an overview of the territories in which Lich was located or the administrative units to which it was subordinate:

In the Landgraviate of Hesse-Darmstadt , the judicial system was reorganized in an executive order of December 9, 1803. The “Hofgericht Gießen” was set up as a court of second instance for the province of Upper Hesse . The jurisdiction of the first instance was carried out by the offices or landlords and thus from 1806 the "Patrimonial Court of the Princes Solms-Hohensolms-Lich" in Lich was responsible. The court court was the second instance court for normal civil disputes, and the first instance for civil family law cases and criminal cases. The second instance for the patrimonial courts were the civil law firms. The superior court of appeal in Darmstadt was superordinate .

With the founding of the Grand Duchy of Hesse in 1806, this function was retained, while the tasks of the first instance 1821–1822 were transferred to the newly created regional and city courts as part of the separation of jurisdiction and administration. From 1822 the princes of Solms-Hohensolms-Lich let the Grand Duchy of Hesse exercise their court rights on their behalf. “ Landgericht Lich ” was therefore the name of the court of first instance that was responsible for Lich. The prince also waived his right to the second instance, which was exercised by the law firm in Hungen. It was only as a result of the March Revolution in 1848 that the special rights of the civil servants became final with the “Law on the Relationships of Classes and Noble Court Lords” of April 15, 1848 canceled.

Mayor of Lich has been the social democrat Dr. Julien Neubert.

On May 1, 1928, the city of Lich received permission to use the coat of arms described below.

Description of the coat of arms :
"In silver a red castle with four towers, above a Munzenberg-Falkensteiner shield that is unequally divided in red / gold."

The coat of arms can already be found in a similar form on the city seal from 1309.

Lich maintains partnerships with the following cities and municipalities:

With the Traumstern cinema , Lich owns a nationally known arthouse cinema that has already received several awards and whose catchment area extends into the Rhine-Main area .

The Licher BasketBären ( TV 1860 Lich , now playing as LTi Lich in Pro A ) has been playing in Pro B , the third highest basketball division in Germany , since the 2009/2010 season . In the 1999/2000 season the Licher even played in the BBL ( basketball league ). The home games are played in the Dietrich-Bonhoeffer-Halle, which can hold around 1500 spectators. It was expanded in 1999 because of the first division promotion.

The first team of the VfR 1920 Lich, the soccer club from Lich, plays in the district Oberliga Süd. The VfR has a membership of around 500, including 250 children and young people. He also owns fifteen youth teams, an old men's team and a second team that plays in the regional league B Giessen.

The karate dojo Lich e. V. was founded in 1985 by Detlef Herbst and has around 420 members, more than half of whom are children and young people. The club has won a large number of championship titles at state, federal and international level. In addition to its regular training activities ( Shotokan karate , gymnastics for adults, physical activity promotion for children), the association also organizes larger mass sports events such as the karate summer school and the kata marathon. In 2008, the association was awarded the “Green Ribbon for Exemplary Talent Promotion in the Association” for the second time by the DOSB .

In 2016, on the initiative of a private association, the Lich Bürgerpark was built on an open space near the city center on a voluntary basis . This park is designed as a recreational area for all generations with numerous opportunities for play, sport and exercise. It is maintained and expanded by the association.

There are stops on the Gießen – Gelnhausen railway line ( Lahn-Kinzig-Bahn ) in Lich and the Langsdorf district .

The city is known nationwide for its private brewery in Lich. Organ building has a 400-year tradition in Lich . The Förster & Nicolaus organ building firm and Otto Heuss GmbH as a manufacturer of organ parts still stand for this today . Lich is also the location of the Asklepios Klinik Lich and BAG Health Care GmbH.

In addition, the headquarters of the community college of the district of Gießen is located in Lich.

Municipalities in the district of Giessen