Building of the Prussian mansion shortly after its completion around 1904

Today's seat of the Federal Council

The House of Lords served as a model . From the point of view of King Friedrich Wilhelm IV. , The institution should not be an electoral chamber, but rather a house of "historically justified authorities" according to his "neo-estates" ideas. In addition, after conflicts with the highly conservative, the crown succeeded, in contrast to southern German practice, in enforcing its largely free right of disposition. This applied to both the appointment of new hereditary and lifelong members. The king had the decisive influence on the composition of the chamber with the possibility of a pair push and very extensive confirmation rights with the elected members. As a compromise with the conservatives, the landowning nobility was given a majority of the seats.

The first chamber of the Prussian parliament of the constitution of 1848 was a pure electoral chamber with 180 members. These members of the Prussian Manor House (MdH) are also called “pairs” in historical research, based on members of the upper houses in France and Great Britain . Eligible to vote were all male Prussian citizens aged 30 and over who had been resident in their community for at least six months and either paid eight thalers in taxes per year or had an income of at least 500 thalers or had assets of at least 5000 thalers. After the revised constitution of 1850, the members were only partially elected. The first chamber therefore consisted of

The number of appointed or hereditary members could not be greater than that of the elected. The elected members were elected for six years (those of the House of Representatives for three years until 1888).

After another constitutional amendment in 1853 there were no more elected members and in 1855 the name of the house was changed to Herrenhaus . The royal decree of 1854, enacted to implement the constitution-amending law, remained in force until 1918. After her there were three groups of members

The hereditary members were divided into four groups:

The appointed members were divided into three categories:

Had the right to present:

In addition to these institutional nominees, there was also an individual right to present the Prussian mansion for noble families gifted with it by the king and endowed with extensive real estate, who had always served the Brandenburg-Prussian crown with particular loyalty. From the first granting of this right of presentation in 1854 until the end of the Prussian monarchy, only 18 Junker families from the old Prussian provinces received this right.

At first, Friedrich Wilhelm IV made little use of the possibility of appointing pairs of trust. Took place under pressure from the governments Auerswald / Schwerin and then Bismarck Wilhelm I , a first pair thrust . Above all, however, Wilhelm II made extensive use of this right, especially after the turn of the century. The result was that this group got more and more weight. In 1860 only 11% of all members were appointed, in 1914 it was almost 30%.

For the choice of the associations of the old and fortified real estate, the Prussian state territory was divided into landscape districts , in whose names numerous historical territories lived on until 1918.

Although the bourgeoisie was given a seat and vote through the representatives of cities and universities, the manor was clearly dominated by the nobility . While Friedrich Wilhelm IV originally wanted a representation of the high nobility and those appointed by him, in the end it was mainly the Junkers , the landed gentry, who had received a strong position. Of the 1295 people who were members of the manor house between 1854 and 1918, 862 came from the old nobility (66.5%), 103 were ennobled (8.0%), and 295 were commoners (25.5%). In 1911, 260 of the 347 members were aristocrats. Of the members in 1914, 21% had their professional background in the civil service (most of them as district administrators), 3.5% came from the foreign service, 11% were career officers, and around 9% had begun a state career ( legal clerkship, etc.) , 55.2% were full-time landowners.

In regional terms, due to the rights reserved for the nobility, the seven eastern provinces with three quarters of all members dominated. Due to the high number of civil servants and military personnel there, Berlin was at the top (about a third of all appointees), followed by the "old" western provinces - the Rhine Province and the Province of Westphalia  - and from 1866 by the Province of Hanover , Hesse -Nassau and the province of Schleswig-Holstein .

The Church of the Old Prussian Union was represented by the cathedral monasteries in Brandenburg an der Havel , Merseburg and Naumburg (Saale) . This gave her preference over the Catholic Church, which had no right of presentation. The Archdiocese of Cologne and Electorate of Trier , who provided electors up to the Reichsdeputationshauptschluss 1803 and were thus equal to territorial noblemen, had no right of presentation. Individual archbishops were mansion members on presentation of the king. The majority of the pairs were denominationally Protestant, which corresponds to the denominational proportion in the population. Catholic members came primarily from the formerly Polish parts of the country in West Prussia and the western provinces of Rhineland and Westphalia. Pairs of the Jewish faith were underrepresented compared to their proportion in the population. This was mainly due to the fact that Jews were not allowed to acquire property until 1812 and were thus excluded from the group of old landowners who dominated the manor house.

The political currents of the mansion differed not only clearly from the political landscape of Prussia, but also from the parliamentary groups of the Second Chamber in the type of composition. There were never any Social Democratic members. Center supporters like Adam Stegerwald remained exceptions, as did left-wing liberal members.

At the same time, there were definitely different trends in the manor house. Friedrich Julius Stahl was the namesake of the conservative "Fraktion Stahl", which was later called the Old Fraction . This was mainly supported by the smaller landowners ("Junkers"). In the first decades, the really large landowners with holdings between 3,500 and 75,000  hectares formed the basis of the New Fraction , which steered a free-conservative - national- liberal course. Towards the end of the 1880s, the younger members of these "grand seigneurs" increasingly followed the course of the old faction. The moderately conservative or nationally liberal part was taken over by a bourgeois-dominated so-called "Lord Mayor's Group".

There are different views in research about the actual role in the structure of rule of the Prussian state. Thomas Nipperdey states that the mansion has a constitutionally strong position in real terms, but at the same time he notes that the crown overweighs both houses of parliament. Above all, Hans-Ulrich Wehler sees the manor house as a veto power not only in Prussia, but ultimately for all of imperial politics. Wolfgang J. Mommsen sees the resistance of the manor house as one of the main reasons for the failure of all attempts up to 1918 to establish the political right of the bourgeoisie.

Based on an unconstitutional revolutionary power to issue ordinances, the Prussian Revolutionary Cabinet consisting of the MSPD and USPD eliminated the mansion by sentence 2 of the ordinance of November 15, 1918 ( Pr. GS. 1918, p. 191). A protest by President Dietlof von Arnim-Boitzenburg , who came from the old Brandenburg family, on November 28, 1918 was the mansion's last sign of life. 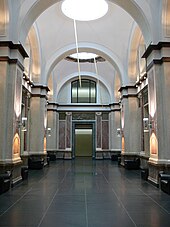 Lobby. Like the entrance hall, parts of the building have largely been preserved in their original state.

The mansion was initially located on Französische Strasse in Berlin-Mitte . The building fell victim to a fire on March 10, 1851. After the fire it met four times in the Hardenberg Palace and then moved to the theater . The furniture was obtained from the Erfurt Union Parliament . The first meeting in the manor was on March 27, 1851. On May 31, 1851, the Chamber bought the Mendelssohn family's house at Leipziger Strasse 3 and had it rebuilt by the architect Heinrich Bürde by November 25, 1851 .

On the plot of the later Prussian manor house in the Leipziger Strasse  3 was first a 1735-1737 Heinrich von der Groeben built palace, which in 1746 by the Royal commercial and factory Commission acquired and Antoine Simond to operate a silk factory was awarded (Simon's silk factory ) . This was taken over in 1750 by Johann Ernst Gotzkowsky , who also bought the Palais , built around 1735 for Christian Friedrich von Aschersleben on the neighboring property No. 4 and sold to Gedeon le Duchat de Dorville in 1761, and built a porcelain factory, which from 1763 became the Royal Porcelain Manufactory. Manufaktur Berlin was continued.

Building No. 3 was acquired by Carl Friedrich Leopold Freiherr von der Reck in 1778 and from 1825 to 1851 it was owned by the Mendelssohn Bartholdy family , who had it converted into a representative residential building. Felix Mendelssohn Bartholdy is said to have composed his music for Midsummer Night's Dream in this aristocratic palace . In 1856 the state acquired the building to house the manor house of the Prussian parliament. The Reichstag of the North German Confederation also met there from 1867 to 1870 . For the Reichstag of the German Empire in 1871, the building on neighboring property No. 4 was converted into a provisional meeting building in just four and a half months, raised by one floor in 1874 and used as such until 1894.

In 1898 both buildings were demolished to make way for the new manor house. This was planned by the architect Friedrich Schulze and completed in 1904. It was erected north of the building for the Prussian Landtag, which was built from 1892 to 1898 by the same architect. Both houses are connected by a common canteen and farm building; the members of both chambers could therefore meet freely. Since 1993 the building of the Prussian Landtag has functioned as the Berlin House of Representatives , as the seat of parliament. The Prussian mansion is on the south side of Leipziger Strasse.

From 1904 - the first meeting took place on January 16 - the building of the Prussian manor house served as the seat of the first chamber of the Prussian state parliament. From 1921 to 1933, the Prussian State Council, representing the provinces , met in the building . Throughout the entire era, its chairman was Konrad Adenauer , who was appointed to the Prussian Council of State in 1917 as the Lord Mayor of Cologne.

On November 4, 1928, the founding congress of the League of Friends of the Soviet Union took place in the Congress Hall.

The building was rededicated in 1933 according to the needs of National Socialism . The Preußenhaus Foundation was affiliated with the Reich Aviation Ministry , so the building was one of Hermann Göring's offices .

The building was badly damaged in World War II and was used by the GDR Academy of Sciences after 1946 .

Seat of the Federal Council

Since September 29, 2000, the building of the Prussian mansion has served as the seat of the German Federal Council , which meets here up to twelve times a year.

Eight bronze sculptures by the Danish sculptor Per Kirkeby were placed on the roof of the building, and a work by Emilia Neumann is in the building . The installation The Three Graces - matt gold movable lances - by the artist Rebecca Horn is installed in the light domes of the foyer .

Presidents of the Prussian mansion