After the Marxist Spartakusgruppe (from November 1918 the Spartakusbund ), which formed the revolutionary wing of the USPD, together with other communist groups in January 1919 during the November Revolution in the newly founded Communist Party of Germany (KPD) and the USPD between KPD and MSPD until was almost crushed by 1922 at the latest, the meanwhile clearly moderate and reform-oriented SPD dropped the alternative abbreviation MSPD and returned to the previous name. 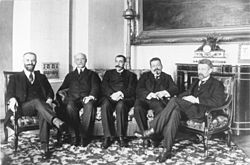 The Council of People's Representatives in 1919: After the resignation of the Independent Social Democrats, it consisted only of majority Social Democrats. They were also the most important leaders of their party.

The reason for the split of the SPD, or rather the German Social Democracy , into two separate parties was the increasing dispute over the truce policy . The majority of the SPD parliamentary group in the Reichstag , led by chairman Friedrich Ebert , who has been in office since 1913 , together with the later USPD member Hugo Haase , supported the war policy of the German Empire since August 4, 1914.

The abbreviation MSPD can be seen as a sign of a substantive change in the SPD, from a socialist-revolutionary class struggle party in the sense of Marxism to a reform party oriented towards the state.

The councilor communist theorist Willi Huhn , who in 1952 published a critical analysis of the history of German social democracy, especially its attitude towards nationalist and militarist traditions in the course of the First World War and the years immediately following, described the MSPD on the basis of documents and evidence since the revisionism debate as " the first National Socialist party “in world history. He found the “ German Labor Front ” of the “ Third Reich ” sketched out in the ideas of the war socialists .

The corresponding development had already begun towards the end of the 19th and beginning of the 20th century with the revisionism debate triggered by Eduard Bernstein , in which the supporters of Bernstein found the way to socialism not through a revolution , but through reforms and through democratic majorities legitimized in general elections aspired to. This reformist wing of the party - "revisionist" as it was then in the internal parlance of the party - initially still in the minority ideologically , gradually asserted itself in the SPD. However, the practical policy of the SPD had long since arrived in parliamentarism , at the latest since the repeal of the socialist laws in 1890 . After the death of party chairman August Bebel , who was seen as an integrating figure of both wings, Friedrich Ebert, a clearly moderate man who began to push through the reformist course, was elected to head the party in 1913.

With the initiation of World War I, the breakup of the Second International and the beginning of the truce policy, which subordinated the class interests of the party to the raison d'état and the war policy of the emperor, the process of change in the SPD came to a head and accelerated to the point where the party split.

At the end of 1914, Karl Liebknecht was initially the only SPD member of the Reichstag who voted against the war credits. As the war lasted longer, with its deadlocked fronts, tens of thousands of fallen soldiers and growing hardship among the German population, doubts about the meaning and justification of the war grew, not only among the population but also among the ranks of the Social Democrats.

Had campaigned from the outset against the war left the revolutionary group International which, in 1916 Spartakusgruppe 1918 in Spartacus League was renamed to Rosa Luxembourg , Clara Zetkin , Karl Liebknecht and others. In 1915/1916 the votes against the war loans from the ranks of the SPD parliamentary group increased. The war opponents no longer only included members of the Marxist wing, but also moderate leftists and reformists such as Hugo Haase and Eduard Bernstein . This internal party opposition grew to 45 members by 1917. In March 1917, the majority of the SPD parliamentary group around Friedrich Ebert and Philipp Scheidemann put a line under the conflict and excluded the war opponents, just as Karl Liebknecht was expelled from the parliamentary group in 1916 and had been imprisoned since mid-November 1916.

The female MPs of the MSPD in the Weimar National Assembly on June 1, 1919.

Then the excluded Social Democrats founded the USPD at the constituent party congress from April 6 to April 8, 1917 in Gotha, to which the Spartacus group joined as a left wing. The majority of the SPD “Burgfriedensfraktion” in the Reichstag became the MSPD.

Not only the left “anti-revisionists” around Rosa Luxemburg migrated to the USPD, but also Karl Kautsky , the longtime editor of the magazine Die Neue Zeit , as well as leading theorists of the reform wing like the father of revisionism , Eduard Bernstein . In the remaining “majority SPD”, instead of Kautsky and Bernstein, the former left anti-revisionists of the Lensch-Cunow-Haenisch group , who were close to the German-Russian publicist Alexander Parvus , influenced the theoretical debates from 1915 onwards . Their goal was to use the hoped-for German victory in the First World War to implement the socialist social order in Europe and to free the Eastern European peoples from the “yoke of tsarism”.

Heinrich Cunow , ethnologist and lecturer at the party school of the SPD, replaced Kautsky in 1917 as editor of the Neue Zeit . He was later to become a co-author of the Görlitz and Heidelberg programs of the SPD. After 1918, Konrad Haenisch was initially Prussian minister of education, then district president in Wiesbaden and finally one of the founders of the Reich Banner Black-Red-Gold , a non-partisan alliance of parliamentary-democratic parties dominated by the SPD to protect the Weimar Republic against its enemies on the political fringes. When many Social Democrats realized from 1917 that the war would lead to defeat, the group's influence waned.

At the end of the First World War, when the military leadership of the German Empire had already admitted the German defeat, the November Revolution followed the mutiny of the sailors in Wilhelmshaven and Kiel in 1918 , as a result of which the Kaiser abdicated and fled to Holland. The MSPD under Friedrich Ebert , to whom the government of Prince Maximilian von Baden had been handed over in the course of the revolutionary events , gave in to the pressure of events more than they were prepared to take over government. Ebert's considerations to forego the abolition of the monarchy in order to prevent a civil war turned out to be illusory.

The Spartakusbund and parts of the USPD advocated the formation of a council republic , as had been enforced in Russia a year earlier during the October Revolution . But of the active revolutionary soldiers 'and workers' councils that supported the revolution, only a minority had in mind the model of the successful overthrow of the Russian Bolsheviks (translated: "majority"). The majority of them wanted above all to end the war and military rule. With this aim, they first stood behind the SPD leadership, which they trusted, and demanded the reunification of the majority SPD with the independent SPD. The SPD leadership then offered the USPD the formation of a council of people's representatives as the new government. This revolutionary government under the leadership of Ebert and Haase, made up of equal numbers of MSPD and USPD members, saw itself as a provisional solution for the phase of revolutionary upheaval and committed itself to a national assembly as the constituent body that would emerge from general elections soon.

At the end of 1918, the coalition between the MSPD and the USPD failed because of the dispute over the use of the military against revolting sailors. The MSPD, now in government alone, felt that the unauthorized actions of individual councils were a betrayal of the democratic principles of the labor movement. Attempts to build a democratic people's armed forces or to give majority social democratic volunteer associations a chance failed. When the People's Commissar Government was attacked during the Spartacus uprising in January 1919, the decision was made to trust the military of the old officers and the new Freikorps leaders.

With the bloody suppression of the Spartacus uprising and the Munich Soviet Republic by right-wing nationalist free corps recruited by Gustav Noske around the turn of the year 1918/19, the majority Social Democrats prevailed. Gustav Noske , who later became the first Reichswehr Minister of the Weimar Republic, was given the nickname "Bloodhound", which he basically gave himself when, when asked to put down the revolution, he said: "Someone has to give up the bloodhound". Under his political responsibility were numerous murders committed by the Freikorps of many known and unknown, including supposed revolutionaries, including the murder of Rosa Luxemburg and Karl Liebknecht on January 15, 1919, carried out by free corps soldiers led by Waldemar Pabst .

The role of Ebert, Noske and Scheidemann during the months of the November Revolution and its suppression led to the accusation of various parliamentary and above all extra-parliamentary active left groups and parties to have betrayed the revolution and thus to a large extent its own supporters (" Who betrayed us? - Social Democrats! ”). The Communist Party of Germany (KPD) was founded by January 1, 1919 from the Spartakusbund and other left-wing revolutionary groups . This brought about the final separation between the revolutionary and reformist wings of social democracy.

On the politics of the MSPD up to the establishment of the Weimar Republic :