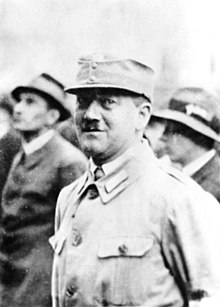 Waldemar Pabst, probably at the deployment of the Heimwehr and the Schutzbund in Wiener Neustadt on October 7, 1928

Ernst Julius Waldemar Pabst (born December 24, 1880 in Berlin , † May 29, 1970 in Düsseldorf ) was a German officer , political organizer and arms dealer. In 1919 he arranged the murder of Rosa Luxemburg and Karl Liebknecht . Throughout his life he worked at the interfaces between the respective German army, right-wing political organizations and the arms industry. In the period after the First World War he was First General Staff Officer of the Guard Cavalry Rifle Division (GKSD) and took part in the Kapp Putsch .

Pabst, son of Arthur Pabst , director of the applied arts and history museum in Cologne , was born in Berlin in 1880. Together with the later Chancellor Franz von Papen , he attended the Prussian main cadet institute and received his officer's license in 1899 . During the First World War Pope was at the front in Belgium, then he took part in the Battle of Verdun , and from mid-1916 he was active in the General Staff .

After the First World War and the overthrow of the German monarchy in the November Revolution of 1918, he was first general staff officer of the Guard Cavalry Rifle Division , a free corps , involved in the suppression of the so-called Spartacus uprising . As part of these battles, Karl Liebknecht and Rosa Luxemburg , the leaders of the Spartakusbund and founding initiators of the KPD, were captured by the Wilmersdorfer vigilante on January 15 and handed over to him in the Eden Hotel . There he interrogated both personally and thereupon had them shot by two escort units, each made up of officers of the naval squadron, without a court judgment , or - as he called it - "judged" (according to Pabst in Spiegel of April 18, 1962). A specific order from an authorized officer for the execution of Luxemburg and Liebknecht was not available.

After Waldemar Pabst's death, a copy of a letter from 1969 was found in his estate:

“It is clear that I could not carry out the operation without Noske's consent - with Ebert in the background - and also had to protect my officers. But very few people understood why I was never questioned or charged. As a gentleman, I acknowledged the behavior of the SPD at the time by keeping my mouth shut about our cooperation for 50 years. "

In a telephone conversation with Reichswehr Minister Gustav Noske on the evening of the murder, Pabst claims to have received his indirect approval: "He must be responsible for what needs to be done".

In an interview with Spiegel in 1962, he already stated that both Noske and Lieutenant General Heinrich von Hofmann agreed with his actions ( “He thanked me, ” said Pabst about Hofmann).

As a result of the murders, there was a trial, accompanied by tumult and laughter, before the GKSD field war tribunal, that is, before the comrades of the murderers: the Liebknecht murderers were acquitted. Lieutenant Vogel , who undertook the murder of Rosa Luxemburg, was able to flee Germany thanks to the help of Wilhelm Canaris , one of the judges in the trial and later Hitler's chief of defense. Only the hunter Runge (who was quickly redesignated as a hussar) had to begin his two-year prison sentence. According to Pabst, the actual shooter Rosa Luxemburg, the former sea lieutenant Hermann Wilhelm Souchon , was successfully mated, only summoned as a witness and then fled to Finland. The person actually responsible for the events at the Eden Hotel, Pabst, was not even charged.

In the summer of 1919, the Guard Cavalry Rifle Corps (GKSK) , which was largely built up and expanded by Pabst, comprised three divisions with a total of 40,000 men. With these troops, Pabst took action at the end of June against a general strike by railroad workers in the Berlin area that had started on June 24th. Noske had banned the strike on June 25th and threatened the “use of gun violence” and the arrest of the strike leaders in a decree. This action first met with open opposition from numerous social democratic party officials and trade unionists, whereupon Noske, who feared a party crisis, ordered the troops to be withdrawn. Pabst then accused Noske of being ultimately only a “party man” and made the decision to “break up” with the parliamentary government at the next opportunity.

With this plan, Pabst found sympathy but no support from the generals, who shrank from an open military coup because of the incalculable risk of a general strike to be expected in this case. Wilhelm Groener recorded Pabst's “foolish ideas” in a diary note on July 9, 1919 and judged that he had become “completely megalomaniac”. On July 5, Noske also refused the dictatorship openly offered to him by Pabst. On the other hand, Pabst was able to win over the officers of the GKSK, who in the event of the implementation of the Versailles Treaty signed on June 28th, would lose their posts, for his project. On July 12th, this group agreed to remove the government and set up a "Directory", but was prepared to keep President Ebert in office. Pabst prepared several edicts that would prohibit strikes and impose the death penalty on all kinds of resistance, including tearing off posters from the new government.

On July 21, Pabst set units of the GKSK on the march to Berlin. A large USPD demonstration on the same day was supposed to serve as a pretext for the occupation of the city . Due to the intervention of Generals Lüttwitz and Maercker , the company was broken off when individual associations had already reached the Berlin suburbs. This "Pope Putsch" was successfully covered up and remained completely hidden from the public. Pabst was not held responsible under criminal or service law, but was merely "sent on vacation". He refused an offered staff assignment in Münster or Stuttgart and received the requested farewell in December 1919, although he did not receive the usual promotion to major.

In 1920 Pabst was instrumental in the right-wing extremist Kapp Putsch . The national association , whose chief executive was Pabst, served as preparation . After its failure as a result of a general political strike , he went into exile in Innsbruck . When he was persecuted after the coup, Pope was defended by Fritz Grünspach . He was also the defender of all defendants in the Liebknecht and Luxemburg trials.

In Austria he was promoted to chief of staff of the Austrofascist Heimwehr militia . He established a close friendship with their financier, the “patron king” Fritz Mandl . In this role, Pabst was also financed by various major German industrialists, such as Hugo Stinnes , Ottmar E. Strauss and Otto Wolff .

Gustav Stresemann , blackmailed by Pabst for their collaboration in 1918/19, operated his amnesty and, as an agent in Austria, provided him with princely annual fees from German secret funds . After the failed Hitler-Ludendorff putsch of 1923, Pabst also received the injured putschist Hermann Göring and became his host and close friend.

At the same time he worked with fascist Italy , which he visited several times. He played a key role in suppressing from the Vienna Palace of Justice fire resulting general strikes .

Return of Pabst (with a bouquet of flowers) from Italy to Austria (ca.1930)

Waldemar Pabst was expelled from Austria in 1930, but continued to commute between Austria and Germany for a while and only settled in Berlin in 1931 as a director at Rheinmetall and in close cooperation with the general director Hans Eltze . In 1931, Adolf Hitler asked Pabst to go to Obersalzberg to make him his “head of political organization”. Pabst did not comply with Hitler's request because he saw himself as a “conservative” and Hitler was a “socialist” in his eyes. He decided to appeal to the Austrian theoretician of the corporate state Othmar Spann and Italian fascism, of which he believed more than of the NSDAP .

During this period he also acted as an informal ambassador for the Heimwehr in Berlin. With Fritz Mandl he organized a joint meeting of the Heimwehr chief Starhemberg and various members of the Harzburg Front , including Hitler. During a visit to Vienna at the time, he advocated a counter-revolutionary government in Austria that should strengthen economic cooperation with Italy and Hungary in order to set up an axis Vienna-Budapest-Rome.

The most important activity between 1931 and 1933 was the founding and management of the Society for the Study of Fascism , with which Pabst established an elite political club dedicated to creating a dictatorship based on the Italian model. In addition to Göring, he was able to bring together other National Socialists such as Walther Funk and Hans Frank with representatives of the DNVP , Stahlhelms and leading business associations.

Pabst was arrested in the so-called " Röhm Putsch " but was released after six weeks thanks to the numerous efforts of old friends such as Canaris and members of the Society for the Study of Fascism who campaigned for him. With the help of Göring in particular, Pabst was even able to achieve written rehabilitation.

After the SA was "purged", Pabst devoted himself less and less to direct political activities and, together with Hans Eltze, more and more intensively to arms exports until he finally founded his own company. In June 1938 he worked with General Georg Thomas in the Defense Economics and Armaments Office and briefly became his first staff officer.

In 1939 he was drafted and released in 1940, according to his own account, because he was an enemy of the state. With the severance payment that Pabst von Rheinmetall-Borsig received, he bought an export and import company, "SFINDEX", with which he procured armaments and machines for the Wehrmacht from Switzerland and other neutral countries. Three years later wandered pope for fear of arrest by the Gestapo in Switzerland , where he simultaneously industrial espionage on behalf of the German defensive driving and in contact with the OSS -Topagenten in Geneva and later CIA boss Allen Dulles was.

In Switzerland he took care of the Solothurn arms factory , which had been founded by Eltze and Mandl in the late 1920s. The factory was to export weapons worldwide on behalf of and in possession of Rheinmetall, as long as the provisions of the Versailles Treaty prevented this. However, Eltze went to Germany in 1933 and Mandl to Argentina in 1938 . Both used Pabst as a confidante who took care of the business in Solothurn.

Only in 1955 did Pabst return to Düsseldorf, where he continued to do arms deals for a long time. After the war he enjoyed occasionally protecting the Bundeswehr -Obersts Achim Oster , the son of his friend who was executed by the Gestapo General Hans Oster . Oster, who was high-ranking in a forerunner organization of the Military Counter-Intelligence Service (MAD), referred to Pabst's "merits" in the murder of Rosa Luxemburg in order to justify his demands on the Bundeswehr. In the bulletin of the Federal Government's Press and Information Office dated February 8, 1962, the murder of Liebknecht and Luxemburg was described as a “ shooting under civil law ” . According to the Bulletin, Pabst was convinced that this was in order to “end the civil war and save Germany from communism ”.

Pabst was later close to the NPD , but without being a party member. He died wealthy in 1970.