The title of this article is ambiguous. Further meanings are listed under Home Guard (disambiguation) .

The articles Austrian Homeland Security and Home Guard overlap thematically. Information that you are looking for here can also be found in the other article.
You are welcome to take part in the relevant redundancy discussion or help directly to merge the articles or to better differentiate them from one another (→  instructions ).

A Home Guard is generally an armed paramilitary unit. However, this term specifically describes Austrian paramilitary “self-protection associations” from the interwar period of the 20th century. These were mainly close to the Christian social camp; but in some cases there were also connections to the German national camp.

The first association of in Tirol so-called homeland defense was on May 12 in 1920 by Members of Parliament of the Tyrolean Christian Socialists , Richard Steidle founded. Between 1920 and 1935/36 Steidle was regional leader of the Heimatwehr in Tyrol, deputies were supporters or mandataries of the Greater German People's Party . Four program points are mentioned in the statutes, the first was "Protection of the constitution and defense against any attempt at a violent constitutional amendment", then "Protection of people, work and property", "Support of the existing state authority in maintaining law and order" and finally " Intervening in the event of natural forces ”. Likewise, the "elimination of all party politics" is emphasized, and as a private association one deals "not with military matters". It can already be seen from this that the Heimatwehr was not an organization of a party, but an independent, politically right-wing unit that was part of " Marxism ", i. H. for Tyrol saw above all in the social democracy , its political enemy.

Initially, the Austrian Heimwehr groups were involved in border disputes with Hungarian and SHS state troops (later Yugoslavia ). After Austria's state borders were finally regulated, the only apparent opponent left here was Austromarxism , from which the bourgeoisie had to be protected in their opinion. This also led to the fact that the Social Democratic camp in Austria formed the Republican Protection League in 1923 as a defensive and democratic counterweight to the Heimwehr.

When the Vienna Palace of Justice went up in flames in connection with the protests against the Schattendorfer verdict in 1927 and over 80 demonstrators died in the subsequent clashes with the executive branch - the social democratic side spoke of the so-called “July massacre” of the workers - the Home Guard movement was the main force in the federal states when social democratic traffic strikes were broken and the bourgeoisie, shocked by the “Marxist terror”, celebrated them as “saviors in need”. The Heimwehr movement experienced a huge boom in Austria in the years up to 1930 and was instrumental in the fact that domestic political conditions became increasingly radical.

The Heimwehr march in Wiener Neustadt on October 7, 1928

In the years after 1927 the Heimwehr sought to be more than the - as Steidle put it - " chain dog " that the bourgeois parties let off the leash as needed. Many Heimwehr leaders began increasingly political profile to develop and demanded more and more vehemently a fundamental change of the political system of Austria in a corporative and authoritarian sense. For this purpose, the various regional associations of the Austrian Home Guard came together in 1927 to form an umbrella organization, the Federation of Austrian Self-Protection Associations. The Heimwehr leaders tried to implement the required system change both through constant agitation on the streets - mainly in the form of huge Sunday marches in markets and cities - and, so to speak, "behind the scenes" through political pressure on the federal government. This is how the Heimwehr managed to get Johannes Schober to become Federal Chancellor in 1929 . Schober, who had been the chief police officer in Vienna in 1927 and had the demonstrators shot, was seen by the Home Guard as a “strong man” and was in turn seen as a bearer of hope. However, he turned out to be a bitter disappointment, not only because he had worked out a compromise with the Social Democrats that was completely unacceptable from the point of view of the Home Guard officials in the dispute over the amendment to the Austrian constitution, which came about in 1929 and strengthened the position of the Federal President because he was unwilling to give in to her other demands.

The federal leader of the Austrian Heimwehr Richard Steidle (center), the deputy Styrian leader Reinhart Bachofen von Echt (left) and the Styrian district leader Hans von Pranckh (right back), photo on the Heimwehr grandstand on the Neuklosterwiese during the deployment of the Heimwehr and the Schutzbund in Wiener Neustadt on October 7, 1928

The failure in the constitutional dispute and the global economic crisis finally ushered in a phase of stagnation and the growing divergence of the Heimwehr movement, which Federal Leader Steidle hoped to overcome in May 1930 with the so-called Korneuburg Oath , whose anti-democratic thrust already points to Austrofascism . Even this attempt to impose an ideology on the home guard movement, which was heterogeneous from the beginning, and in this way to ensure more unity, did not lead to its renewed strength. In order to finally win back the initiative and still implement the required system change in the direction of an authoritarian corporate state, the federal leader of the Home Guard, Ernst Rüdiger Starhemberg , who was newly elected in September 1930, fought for participation in the government and enforced that the home guards, who always had been an avowed opponent of parliamentarism, participated in the National Council elections of 1930 under the designation home block .

However, the election result of the home bloc fell far short of expectations and further weakened the internal cohesion of the Home Guard movement. Starhemberg finally made room for Walter Pfrimer , who was a representative of a radical course within the Heimwehr movement and had already used violence several times in Styria to enforce political demands, as the new federal leader. In view of the fact that all the paths taken so far to implement the desired system change had failed, the disintegration of the home guards continued and they were also exposed to increasing pressure from the growing Austrian National Socialists, Pfrimer now put everything on one card: through a coup d'état the demands of the Heimwehr are finally implemented and all problems are solved in one fell swoop. The Pfrimer Putsch in September 1931 failed miserably and ultimately ensured that the Heimwehr movement was now completely split up into a "loyal to the government" wing around Richard Steidle and Ernst Rüdiger Starhemberg and an "anti-government" wing around Konstantin Kammerhofer , the leader of the Styrian Homeland Security , who constituted the largest segment within the Heimwehr movement, disintegrated.

Even when the corporate state under Federal Chancellor Engelbert Dollfuss began to become a reality from 1933, the home guards remained a source of unrest. Beginning in Tyrol, where on January 30, 1934, there were large armed parades of the Heimatwehr in numerous places and the demand for the establishment of an authoritarian state committee with the participation of Heimatwehr members, a kind of "rolling [r Heimwehr] putsch" went through in the period that followed Austrian federal states, which caused a hitherto unseen domestic "high tension" that finally erupted in the February battles against the Social Democrats.

After the dissolution of the Social Democratic Party on February 12, 1934, the NSDAP became the new enemy of those Heimwehr associations that supported the political course of the federal government, while the associations of Styria and Carinthia moved more and more in the direction of the NSDAP and finally merged organizationally with it.

In the Austro-Fascist corporate state (1933–1938), the home guards had, among other things, police and security tasks within the framework of the protection corps . During the February battles and the National Socialist July coup , they not only took on reconnaissance, guard and security tasks, but also carried out smaller combat missions on their own, which significantly relieved the other formations fighting on the government side (gendarmerie and armed forces). When all military associations were disbanded in 1936, the home guards were largely absorbed into the Patriotic Front and the Front Militia .

The Heimwehr were close to the Christian Social Party and also to the German National Camp , and they were supported by Ignaz Seipel and other Christian Social politicians. The home guards were soon concerned with playing an independent political role. The Korneuburg program took a counter position to the Linz program of the social democrats, which was aimed at a democratic takeover of power, but which contained formulations that could be interpreted as striving for a dictatorship of the proletariat .

Attempts to unite the Heimwehr nationwide under uniform leadership were made several times, but failed in the long term due to the differing objectives of the individual Heimwehr associations and groups and the rivalries of their main leaders (Walter Pfrimer, Ernst Rüdiger Starhemberg, Richard Steidle). In particular, the Styrian Homeland Security and the Carinthian Home Guard rejected the federal leadership's Christian corporate-state course and increasingly approached the NSDAP. The Heimwehr therefore never became the strong, united and non-partisan “popular movement” that it happily pretended to be.

The Carinthian and the Styrian part of the Heimwehr in particular appeared openly anti-Semitic ; The attitude of the rest of the home guards was less clear. Although they did use anti-Semitism as a political weapon, for example against refugees from the East or against the supposedly “Jewish” social democracy, overall these reservations were more opportunistic than ideological and played at least no dominant role as an integrative element of the movement. 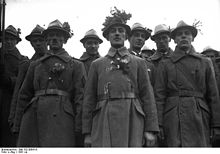 Members of the Heimwehr in Wiener Neustadt on October 7, 1928

Because of their headgear, a hat or a cap with a "play cock thrust" (hunted expression for the tail feathers of the black cock ), which was adopted by the Tyrolean riflemen , they were also called "cocktails". The mocking verse circulated among their opponents:

In principle, uniform uniforms were intended for the members of the Home Guard, but this was rarely observed, as the members generally had to pay for their own clothing. Therefore, the Heimwehr men were provided with both military and civilian clothing of all kinds. Only the mobile home guard formations, known as Jäger battalions , which were supposed to function as a kind of rapid reaction force, were completely and relatively uniformly uniformed, which was made possible not least by the fact that Starhemberg also financed its equipment with its own resources.

In the Vienna Army History Museum there are uniforms from female members of the Heimwehr and the Ostmärkische Sturmscharen, among others .

Articles in magazines and compilations