Logo of the youth organization of the Stahlhelm

The " Stahlhelm, Bund der Frontsoldaten " was a military association at the time of the Weimar Republic , which was founded shortly after the end of the First World War on December 25, 1918 by the reserve officer Franz Seldte in Magdeburg . Seldte was chairman of the association together with Theodor Duesterberg . She was considered the armed arm of the anti-democratic German National People's Party (DNVP). For example, the steel helmet often provided the (armed) hall protection at party meetings .

The name goes back to the steel helmet introduced in the German army in 1916 . For many soldiers at the front, he became a symbol of hardship and willingness to make sacrifices. Ernst Jünger mentions in his first work In Stahlgewittern in the chapter on the Battle of the Somme that on August 23, 1916 he saw the first German soldier with a steel helmet. In 1934 he added: "He was the first German soldier I saw wearing a steel helmet, and he immediately appeared to me as the inhabitant of a strange and harder world." 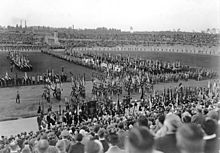 Entry of the Stahlhelm flag companies during the major event "Ten Years of the Versailles Treaty", German Stadium (Berlin) , June 1929

13th Front Soldiers' Day of the Stahlhelm at Berlin-Tempelhof Airport with around 150,000 participants in September 1932

The Stahlhelm saw itself as an organization in which the work of all those involved in the war was to be recognized, and stood in clear opposition to the political system of the Weimar Republic. A worldview prevailed in the steel helmet that was strongly based on the imperial era. Former front soldiers of the Jewish faith were denied membership (see Reichsbund of Jewish Front Soldiers ). In separate subdivisions (Scharnhorstbund, Jungstahlhelm, Stahlhelm-Studentenring Langemarck , Landsturm) interested adolescents and older men with no experience of the front were trained militarily from 1924, with the Reichswehr providing active support. The members and their leaders saw themselves as personnel reserves for the Reichswehr, which was limited to 100,000 men by the Peace Treaty of Versailles . The number of members increased to over 500,000 by 1930. The steel helmet was the second strongest paramilitary association of the Weimar Republic after the Reichsbanner black-red-gold .

At least until the founding of her own Stahlhelm women’s association in 1928, Queen Luise was the association's unofficial women's organization.

The steel helmet was financed by former military personnel and the entrepreneurs grouped together in the German gentlemen's club , as well as by large landowners from East Elbe .

Although the Stahlhelm officially presented itself as non-partisan, it appeared since 1928 as hostile to the republic and democracy and also as anti-Semitic and racist. The goals were the establishment of an autocracy in Germany, the preparation of a war of revenge and the establishment of an anti-parliamentary corporate state . In the " Fürstenwalder hatred message " of September 1928 it was said: "We hate the current state structure, its form and its content with all our hearts " because it represents an obstacle to "freeing our enslaved fatherland [...] the necessary living space in To win the East and to make the German people defensive again ”. Therefore, towards the end of the Weimar Republic, the Stahlhelm members referred to themselves as the "German fascists " in contrast to the NSDAP . Other basic demands included the creation of a “nationally large German Reich”, the fight against social democracy and the “merchant spirit of Judaism” and the democratic-liberal worldview, the allocation of leading positions in the state to soldiers from the front and a policy for living space in the East.

In 1922, an Aryan paragraph that was supposed to remove all Jewish members was on the agenda of the "Front Soldiers Day". The decision was postponed and then made in 1924 with a resolution to "eliminate racial influences". Like the other organizations on the political right, the Stahlhelm was a decidedly anti-communist formation.

On October 9, 1929, the Prussian Minister of the Interior, Albert Grzesinski, issued a ban on the Rhineland and Westphalia regional associations, which was based on an "off-road game" illegally carried out in Langenberg (Rhineland) in September 1929 . The ban was lifted on July 16, 1930.

Together with the DNVP under Alfred Hugenberg and the NSDAP under Adolf Hitler , the Stahlhelm organized a referendum against the Young Plan . In 1931 the steel helmet was one of the founding organizations of the Harzburg Front, which was directed against the Weimar Republic . In the first round of the 1932 presidential election , the Stahlhelm put up its own candidate, Theodor Duesterberg . He was a competitor and at the same time a close ally of the Nazi movement. Both had a broad political and ideological overlap. 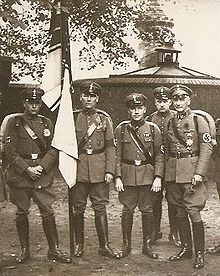 Members of the so-called "Wehrstahlhelm" (1934)

After the NSDAP came to power , the steel helmet was seen as the only association still existing vis-à-vis the NSDAP organizations: "Hundreds of thousands of former members of the disbanded 'Reichsbanner' and the ' Red Front Fighters ' Association', some of them, entered the steel helmets to find protection there also to rummage politically. "(Duesterberg)

The disarmament campaign against the Stahlhelm in Braunschweig, the so-called Stahlhelm Putsch by the NSDAP on Monday, March 27, 1933, is an example of the pressure on the Stahlhelm. By including former Reichsbanner members in its ranks, local attempts were made to strengthen the association's importance. A massive action by the SA and SS was directed against this, partly in cooperation with the local police, which included the temporary imprisonment of 1,500 Stahlhelm members and leaders and a temporary ban on organization. 1000 of those arrested were members of the SPD and KPD. Many of the new applicants were mistreated.

Stahlhelm founder Franz Seldte became Reich Labor Minister in the Hitler cabinet and joined the NSDAP in April 1933. As such, he promoted a “law against Jewish doctors” in 1933 and with it the anti-Semitic professional bans. In August 1933 he became SA-Obergruppenführer and later Reich Commissioner for the Reich Labor Service . He remained Reich Labor Minister until 1945.

After Seldte had declared on 27 April 1933 that he and his helmet as "closed soldier's unit the leader" among spot, took place in 1933/34, the DC circuit of the steel helmet, its subsidiary organizations and all other militaristic organizations through subordination to the SA . The under 35-year-old members, around 314,000, took over the SA directly from July as "Wehrstahlhelm". Under the designation "SA Reserve I", the 36 to 45 year old members of the Stahlhelm were organizationally subordinated to the SA leadership until September 1933, those over 45 as "SA Reserve II". In January 1934 these associations “merged” with the SA. The remainder received the name "National Socialist German Front Fighters Association (Stahlhelm)" in March 1934. On November 7, 1935, Hitler dissolved this organization as well.

In 1951, Der Stahlhelm eV was newly founded in Cologne as a registered association , in which the former Field Marshal Albert Kesselring also participated. Old and neo-Nazis as well as parts of the right-wing extremist scene still tie in with the ideology of the “Stahlhelm”, which later became known as “Der Stahlhelm e. V. - Bund der Frontsoldaten - Kampfbund für Europa ”and had its headquarters in Jork , Lower Saxony , for a while. Some of the national associations of the club have now dissolved themselves (2011).

The central organ Der Stahlhelm first appeared as a bi-monthly, from 1924 as a weekly newspaper. The circulation clearly exceeded 100,000 in the mid-1920s, but then fell back to below 100,000. In addition to smaller organs for students and monthly letters for Stahlhelmführer , Die Standarte appeared in 1925/26 with the subtitle Contributions to the spiritual deepening of the front thought. Unofficial guide supplement to the steel helmet . It was published in the years 1926–1929 with the addition of the weekly newspaper of the new nationalism by Ernst Jünger , Franz Schauwecker and others.