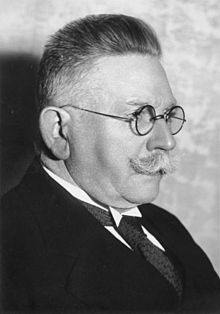 Alfred Ernst Christian Alexander Hugenberg (born June 19, 1865 in Hanover ; † March 12, 1951 in Kükenbruch ) was a German mining , armaments and media entrepreneur , politician ( DNVP ) and Minister of Economics during the first months after Hitler came to power in 1933 , Agriculture and Food in his first cabinet . He is considered to be the most important bourgeois pioneer of National Socialism . He was one of the founding members of the Pan-German Association , which was at times one of the largest and best-known agitation associations . With his Hugenberg Group , a media group that controlled half of the German press , he made a significant contribution to the rise of right-wing and right-wing extremist parties in the Weimar Republic with nationalist and anti-Semitic propaganda .

Alfred Hugenberg was born as the son of the Royal Hanoverian Treasury and later a member of the Prussian state parliament Carl Hugenberg (1836–1882) and his wife Erneste, born. Adickes (1841–1917), born in Hanover. In 1900 he married Gertrud Adickes (1878–1960, his second cousin), the daughter of the then mayor of Frankfurt , Franz Adickes . Alfred and Gertrud Hugenberg had a son and three daughters.

Hugenberg studied law in Göttingen , Heidelberg and Berlin and completed an economics degree in Strasbourg in 1888 with a dissertation on the topic of internal colonization in northwest Germany . From 1894 he held a leading position in the settlement committee in Poznan . This should promote the Germanization of the province of Poznan by settling German families .

From January 1, 1908, he was on the board of directors of Richard Merton's Frankfurter Berg- und Metallbank , and from October 1, 1909, until 1918, he headed the finance department of Friedrich Krupp AG as chairman of the board of directors . From 1912 to 1925 he was chairman of the mining association and the colliery association, and since 1919 a member of the executive committee of the Reichsverband der Deutschen Industrie and a member of the board and committee of German employers' associations. In 1916, Hugenberg took over the important Scherl publishing house , which had a German-national orientation.

After the November Revolution of 1918 he was a co-founder and influential member of the nationalist DNVP , whose goals - the elimination of the Weimar Republic and the reintroduction of the monarchy - his Hugenberg Group supported. The Hugenberg Group was a media company made up of publishers, press services and agencies ( Telegraphen-Union , Transocean ), advertising agencies, correspondence services, film companies (such as UFA with newsreels ) and newspaper holdings, which it sold to the NSDAP in 1933 . He received the money for his media empire from the trade association for the promotion of intellectual reconstruction forces .

Hugenberg had been chairman of the DNVP since October 20, 1928 and, after a phase of willingness to cooperate between 1925 and 1928, led the party in a direction of the fundamental opposition and - albeit by no means smooth - cooperation with the aspiring National Socialists. On the initiative of Alfred Hugenberg, the "National Opposition" (see Harzburger Front ) met on October 11, 1931 in Bad Harzburg for a major event to demonstrate their unity in the fight against the Weimar Republic. For the Reichstag election on March 5, 1933 , the DNVP joined forces with the Stahlhelm to form the black-white-red battle front .

He administered the Ruhrlade's funds , which were distributed to political parties, founded the committee of four and was a member of the Gäa .

In July 1929, Hugenberg accepted the NSDAP into the “Reich Committee for the Referendum against the Young Plan ” and thus gave it enormous publicity and reputation in the “national camp”. From then on, the corporate newspapers printed Hitler's speeches in full; DNVP and NSDAP held joint election campaign events.

Alfred Hugenberg, Robert Ley , Joseph Goebbels , Walther Funk and, behind them, half-hidden, UFA General Director Ludwig Klitzsch at the 25th anniversary celebration of UFA in the Ufa-Palast am Zoo , March 4, 1943

Hugenberg's publications had an impact above all since the global economic crisis that began in 1929 and had an impact on the "seizure of power" by the National Socialists in early 1933.

On January 30, 1933, President Hindenburg appointed Hugenberg to the cabinet led by Hitler as Minister of Economics , Agriculture and Food . However, Hugenberg resigned from all ministerial and party offices on June 29, 1933. The background to his resignation was that the National Socialists wanted to politically eliminate him and his party. In order to achieve this, he was allowed to present demands at the World Economic Conference in London on June 12, 1933 , which had to do with the return of the German colonies . After the conference participants vehemently denied his request, his demands were immediately passed off as his private opinion. Hugenberg did not want to continue the role of a figurehead of the conservatives that had been assigned to him and gave up his offices. His successors were Kurt Schmitt (Reich Economics Minister) and Walther Darré (Reich Minister for Food and Agriculture). However, until 1945 Hugenberg remained a member of the Reichstag "as a guest of the NSDAP". After Hugo Bruckmann's death on September 3, 1941, he was also the age-president of the Reichstag. Like so many of Hitler's supporters, he no longer played a role in the further course of the National Socialist dictatorship , but the press landscape concentrated by Hugenberg did . The majority was taken over by Nazi publishers, such as the monopoly, NSDAP-related Franz-Eher-Verlag . On March 3, 1943, Hugenberg received the eagle shield of the German Empire .

For Karl Dietrich Bracher, Hugenberg was "a stubborn pan-German and limited reactionary".

Media entrepreneur in the German Empire and the Weimar Republic

As early as 1912, Hugenberg ran a covert press control agency in which he tried to influence the formation of opinion . In 1913 he bought four smaller news offices from the Schwerin Legation Council, which he merged to form Telegraphen Union GmbH (TU) . The long-term goal was the attack on the monopoly of the Wolff Telegraph Bureau (WTB). In 1913 , August Scherl informed Chancellor Bethmann-Hollweg that he was going to part with regular shares in his company worth 8 million marks. He announced that Rudolf Mosse would offer him 11.5 million marks for these; however, he would leave the shares to "friends of the government" for 10 million. The company, one of the three major Berlin media giants alongside Ullstein and Mosse, was finally absorbed by Baron Simon Alfred von Oppenheim and the Cologne financier Louis Hagen with funding of 8 million marks. On February 5, 1914, Scherl resigned from the management.

However, the new Holding Deutscher Verlagsverbund soon ran into debts in the millions. The buyers turned to the Reich government. This in turn came to an agreement with Hugenberg, who assured the German publishing association that it would repay its debts, provided that the majority of the shares in the Scherl company would be transferred to him. On March 25, 1916, Hugenberg took over the chairmanship of Scherl's former company. One of the supporters of the takeover was the Prussian Ministry of the Interior, which Hugenberg provided in August 1914 and in 1916 with 2.5 million marks each.

In 1914, Hugenberg finally founded the Auslands GmbH , based in Essen. The purpose of the company, with the participation of heavy industry, was to promote relations between Rhenish industry and foreign cultural areas by improving the communications system. When the company was founded on April 30, 1914, Auslands Werbung GmbH , based in Berlin, completed the company. It was supposed to launch advertisements by German industrialists abroad, but could hardly develop after the start of the war.

With the establishment of "Ala", the " Allgemeine Werbung GmbH " on March 9, 1916, the expansion of the media group began to become a perfect competitor of the Ullstein and Mosses companies - the attack aimed at Mosses' predominance in the mediation of newspaper and magazine advertising. In order to build up the network of branches that the advertising expedition needed, Hugenberg acquired the majority of shares in the companies "Haasenstein and Vogler" and "Daube and Co." in 1917. The "Ala, United Advertising Company Haasenstein and Vogler, Daube and Co." became the largest adverts -Expedition in Germany. In 1917, "VERA", the publishing house GmbH based in Berlin, was founded. It acted as a specialist advice center for large industrialists who became owners of newspapers. The fight for the provincial press began with the takeovers of the expanding consortium that followed.

In the years that followed, Hugenberg built up a media conglomerate of publishing houses, news services, advertising agencies, correspondence services, film companies and numerous newspaper holdings from the Scherl publishing house and the Telegraphen Union. The flagships from Scherl's newspaper empire gave the Hugenberg Group a monarchist and, during the Weimar Republic, right-wing nationalist and finally openly National Socialist orientation.

On October 23, 1922, Hugenberg founded Mutuum Kredit Aktiengesellschaft, a newspaper bank that lent newspapers, invested in newspapers and also linked newspapers with the VERA. Shareholders were able to use the newspaper bank as an instrument to secure their influence over corporate bodies. In the same year, the company gained its practical side with the establishment of WiPro , the “economic office of the provincial press ”. This allowed the Hugenberg Telegraph Union to break the monopoly that had previously been held by Wolff's Telegraphic Bureau (WTB) on the German news market. So the sale of news could be optimized with the "WiPro", which sold finished Matern to small newspaper publishers. The company was expanded in 1923 during inflation through a similar acquisition. It offered editorials , news, novels and sports reports, pressed ready-to-print in cardboard strips that only had to be processed into finished printing plates in the provincial printing plants with the help of conventional metal casting machines. Most of the provincial papers , which saved themselves editors in this way, obtained their columns from Hugenberg's workshops a little later.

The customer base grew in the twenties to 1,600 German newspapers from German national papers to liberal-conservative ones. Hugenberg's group employed a staff of 2,000 employees, including over 500 permanent employees and 90 editors with the task of selecting, formulating and commenting on news.

Company in the film industry of the Hugenberg Group

The still young film industry joined the press sector. As early as 1916, Hugenberg and the publicist Ludwig Klitzsch (the general director of UFA from 1927) founded the Deutsche Lichtbild-Gesellschaft , from which Deuligfilm A.-G. emerged. UFA - Universum Film AG , which he restructured with the help of Deutsche Bank, turned out to be a brilliant acquisition in 1927 .

Newspapers and magazines from Scherl-Verlag

Newspapers with the participation of the Hugenberg Group

Legal dispute over denazification and entitlement to compensation payments

From 1946 to 1951, Hugenberg was interned in the UK . A legal battle of several years over its denazification began . The corresponding proceedings were carried out by the former Reichstag member and lawyer Joseph Borchmeyer . In several appeals procedures in 1948, the classification in category III (less burdened), which was changed in 1949 to category IV ( fellow travelers ) and 1950 to category V (exonerated). In view of his old age, the court ultimately assumed that no further political activity could be expected from him.

Hugenberg died withdrawn in 1951 in Kükenbruch near Rinteln on the family estate.

On March 17, 2005 a Senate of the Federal Administrative Court (AZ: 3 C 20.04) confirmed Hugenberg's role as a pioneer of National Socialist rule. In a trial of the manor in Uhsmannsdorf near Rothenburg / OL in Saxony , which had been expropriated by the Soviet Military Administration (SMAD) in 1945 , he ruled that Hugenberg "made a significant contribution to the National Socialist system" and therefore refused to compensate his descendants.