August Hugo Friedrich Scherl founded a press and book publisher on October 1, 1883, which has been called August Scherl Verlag since 1900 . Since November 3, 1883, he was the first German “ Generalanzeiger ” to publish the Berliner Lokal-Anzeiger , and since 1899 the illustrated weekly newspaper Die Woche was published by his publisher .

At times he owned the newspapers with the highest circulation in Germany and was a competitor of Leopold Ullstein and Rudolf Mosse . He found the key to the success of his newspapers from foreign newspapers: Instead of printing cumbersome, knowledgeable comments , these were mainly based on short messages and thus secured millions of copies. Scherl imitated them. 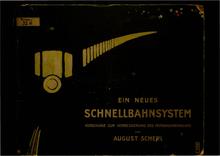 In 1909 he developed a monorail system for Germany in his book Ein neue Schnellbahnsystem . His costly newspaper projects were not economically successful, so that he sold his press company in 1913 to the "German Publishing Association" and left in 1914. His national newspaper empire was taken over in 1916 by Alfred Hugenberg and later by Max Amann ( Franz-Eher-Verlag ).

Scherl initially lived in Naunynstrasse (parental home), later always in a prestigious central location in Berlin. He is said to have secretly built a million dollar villa in the villa colony of Berlin-Grunewald to surprise his wife. When she said derogatory about the building while driving past, Scherl allegedly had the house demolished without informing his wife. The “secret” of his success was a willingness to take risks, economic sense, far-sighted innovative strength and mistrust.

His grave can be found in the Luisenstadt cemetery in Berlin next to that of his wife, the actress Flora Rosner .

Periodicals, newspapers and magazines from the August Scherl publishing house

Most of the pictures from Scherl-Verlag are in the "Bild 183" stock in the picture archive of the Federal Archives in Koblenz.