Otto Georg Thierack (born April 19, 1889 in Wurzen , Saxony ; † October 26, 1946 in the Eselheide internment camp ) was a German lawyer and National Socialist politician. He was Reich Justice Minister under Adolf Hitler from 1942 to 1945.

Advancement to President of the People's Court

Thierack studied law from 1910 at the universities of Marburg and Leipzig , became a member of the Corps Guestphalia Marburg and passed the first state examination in 1913. It was discussed in Leipzig in 1914 on the subject of Who does the property of a legally competent association of the Civil Code go to after the loss of its legal capacity and how does this attack develop? PhD . At that time he was working as a trainee lawyer in Scheibenberg . From 1914 to 1918 he took part in the First World War as a war volunteer , most recently with the rank of lieutenant . He suffered a facial injury and was awarded the Iron Cross, 2nd class. After the end of the war, he resumed his interrupted legal training and completed it in 1920 with the assessor examination. In the same year he was hired as a court assessor in Saxony . From 1926 he worked as a public prosecutor in Leipzig and later in Dresden.

On August 1, 1932, he joined the NSDAP . After the National Socialists came to power in 1933, he quickly rose from public prosecutor to president of the People's Court .

Appointed Saxon Minister of Justice on May 12, 1933 , it was his task to carry out the “realizing” of the judiciary, that is, part of the harmonization of the federal states, in his country. After further short career stops, he became Vice President of the Reichsgericht in 1935 and President of the People's Court in 1936 .

On April 23 and 24, 1941, he took part in a meeting of the highest judicial officials, the subject of which was the so-called "destruction of life unworthy of life" in the context of the murder of the sick in Operation T4 .

In the autumn of 1941, Thierack met Reinhard Heydrich's ideas in the trial against Alois Eliáš . He had just been appointed Reich Protector in Bohemia and Moravia and had introduced martial law. The People's Court met in Prague, bypassing the court system, holding out the responsible public prosecutor's office and accepting the head of the Stapo office in Prague as the prosecutor. Heydrich then complained about the hindrance by the Reich Ministry of Justice, namely Franz Schlegelberger , but expressly thanked Thierack for his "excellent support" and "political understanding". 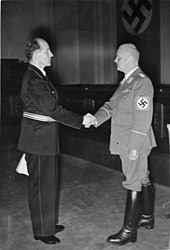 Thierack (right) and Roland Freisler at his inauguration as President of the People's Court, August 1942.

In a speech to the Reichstag on April 26, 1942, Adolf Hitler made contemptuous comments about the judiciary's still too “formal” legal conception and threatened judges with mild judgment with dismissal. The Reichstag subsequently confirmed Hitler's position as supreme court lord, which he had already claimed for himself during the “ Röhm Putsch ”. The last remnants of a formal separation of powers were thus eliminated.

With Heinrich Himmler and Heydrich as advocates and good contacts to Martin Bormann , Thierack replaced the unpopular Schlegelberger at the head of the Reich Ministry of Justice on August 20, 1942 . State Secretary under him was Curt Rothenberger . On August 27, Hitler also appointed Thierack President of the Academy for German Law .

A Führer decree published in the Reichsgesetzblatt empowered Thierack to “set up a National Socialist administration of justice”; here he could “deviate from existing law”. Sarah Schädler points out that the decree contained the unclear wording typical of National Socialism, left room for maneuver and provoked disputes over competence. It was not a license; The agreement with the Party and Reich Chancellery was always decisive.

Immediately after his appointment, the Reich Minister of Justice made a drastic change in personnel in the ministry and the highest judicial authorities. State Secretary Schlegelberger had himself retired because he - according to his own statement in the Nuremberg legal process - now had to fear for judicial independence . Roland Freisler succeeded the People's Court. Sometimes Thierack intervened in reprisal when he saw the “dignity of the People's Court” acquired in years of laborious work impaired. For example, he criticized the overly broad interpretation of the “public” element in the Special War Criminal Law Ordinance .

Thierack agreed with Himmler that in certain cases convicted prisoners should be transferred to the Gestapo for extermination by labor . At the same time, a correction of "insufficient judicial judgments" by " special police treatment " was discussed, which Thierack wanted to decide on a case-by-case basis. Furthermore, foreign offenders should no longer be subject to ordinary jurisdiction . The report of September 18, 1942 states:

“Delivery of anti-social elements from the prison system to the Reichsführer SS for destruction through work. It will be completely delivered the detainee , Jews , Gypsies , Russians and Ukrainians , Poland over 3 years punishment, Czechs or German over 8 years penalty decision of the Minister of Justice. [...]
There is agreement that [...] in future Jews, Poles, Gypsies, Russians and Ukrainians will no longer be tried by ordinary courts as far as criminal matters are concerned, but will be dealt with by the Reichsführer SS. "

Thierack stated in a letter to Bormann on October 13, 1942 in connection with Poles, Russians, Jews and "Gypsies" regretfully that the judiciary could only contribute to the extermination of members of this ethnic group to a small extent.

Thierack introduced the “ judges' letters ”, which appeared monthly from October 1942 , in which, in the opinion of the National Socialist rulers, exemplary decisions were presented in anonymized form and which should be used as a basis for the judiciary . He also introduced so-called previews and reviews. According to this, the higher regional court presidents had to discuss how the judgment should be made with the public prosecutor and the regional court presidents at least every 14 days in criminal proceedings of public interest before the decision was made by the court .

Thierack worked on bills for the Justice of the Peace Order as well as the Youth Courts Act and continued work on a law on the treatment of non-community members , which was ready for printing in 1945. People who, according to alleged criminal biological findings , have a tendency to crimes, who are work-shy and thieves, who do not meet “the minimum requirements of the national community” due to a lust for conflict or lack of character, should be guarded by the police or sent to camps. If they had committed offenses, courts could sentence them to indefinite terms of imprisonment and even death, or refer them to the police as “incorrigible” or “annoying community strangers”.

After Hitler intervened, Thierack ordered death sentences to be carried out immediately. In the case of appeals for clemency, individual statements by the judging court, the public prosecutor, the public prosecutor's office or other bodies are no longer required. A service was created in the Reich Ministry of Justice that was manned day and night in order to expedite the refusal of requests for clemency.

In January 1943, Thierack let Rudolf Höß guide him through the Auschwitz main camp .

After some buildings in the Plötzensee prison were bombed in September 1943 , Thierack personally ordered around 300 people sentenced to death to be killed immediately, according to several witnesses. Those hanged included prisoners whose pardon proceedings were still pending and some who had not yet been sentenced to death by the court.

Dissolution of the Nazi state and suicide

In April 1945 Thierack insisted on uncompromising toughness. He had the President of the Higher Regional Court of Koenigsberg , Draeger , and his attorney general, Szelinski, arrested in Swinoujscie , after they had fled westward from the advancing Red Army . After an interrogation by Thierack personally, Szelinski committed suicide while in prison. Draeger was sentenced to death by the People's Court for desertion and executed.

Thierack's paths in the last days of the war are largely in the dark. He is said to have left Berlin on April 20, 1945 to go to Eutin , to which the ministers who were still in Berlin had been instructed. On May 2nd he was demonstrably in Eutin. In Hitler's political will , he was designated as Minister of Justice in the successor government. Karl Dönitz renounced Thierack and released him on May 6, 1945. Whether Thierack went to Flensburg with the government is just as unclear as the question of whether his letter of dismissal reached him.

After the surrender, Thierack was wanted by the Allies as a war criminal , including for murder. He was imprisoned by the British in Neumünster , probably in the Gadeland internment camp . When and under what circumstances the arrest took place is unclear. In the internment Eselsheide laid, Thierack took the life before he in Nuremberg judges' trial could be brought to justice. The time of death was set at 4:30 a.m.

His widow Eveline, b. Zumloh, experienced the end of the war with her mother in Triebes , Thuringia . There she was denazified and later received a small pension.

Martin Broszat writes that Thierack's assumption of office "initiated the last most extreme phase of the sell-off of the judiciary". Sarah Schädler relativizes this judgment and asks whether Thierack had actually freely given up competences: He made promises to Himmler, which, however - as in the case of the controversial approval of the Gestapo instead of the public prosecutor - he by no means always kept in order to be able to preserve the authority of the Ministry of Justice. Thierack, however, was not fundamentally in opposition to the political police, rather he himself was an advocate of draconian toughness; He was not interested in prosecuting “racially inferior groups” and voluntarily relinquished competencies when “handing anti-socials to the police” for extermination through work .

Thierack was an unscrupulous “arch-careerist”, “power hungry”, “ambitious” and “scheming” and was described by employees as “hardworking and robust”, “autocratic” and “autocratic”. Thierack came closer to Hitler's political line than his predecessors and was characterized in Hitler's Political Testament as "honorable" and "willing to continue the war by all means".

Thierack was a “fanatical National Socialist” who influenced the judiciary with steering instruments such as “ judges' letters ”, judgment previews and reviews, reporting obligations and inspection trips in order to destroy the independence of judges. During his tenure, the number of death sentences increased; less than three percent of the appeals for clemency were approved by him. Thierack was responsible for the tightening of the penal system and the handling of night-and-fog proceedings .

Saxony in the time of National Socialism: Otto Georg Thierack

Saxony between the Third Reich and dissolution in the GDR: Reinhard Uhle  | Hermann Kastner  | Johannes Dieckmann