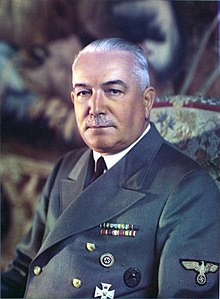 Konstantin von Neurath as a corps student in Tübingen, around 1896 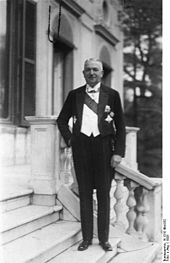 Konstantin Hermann Karl Freiherr von Neurath (born February 2, 1873 in Kleinglattbach , Kingdom of Württemberg ; † August 14, 1956 in the Leinfelder Hof near Enzweihingen , Baden-Württemberg ) was a German diplomat in the Empire and the Weimar Republic . He became Foreign Minister in 1932 and remained so until 1938 even during the Nazi dictatorship . Between 1939 and 1943 he was Reich Protector in Bohemia and Moravia .

Neurath was one of the 24 people charged in the Nuremberg trial of the main war criminals before the International Military Tribunal and was found guilty on all four counts on October 1, 1946 and sentenced to 15 years in prison, from which he was released early in 1954.

Neurath was born on February 2, 1873 in Kleinglattbach / Vaihingen an der Enz, the eldest of three sons of a noble family from Württemberg. His father Konstantin Sebastian Freiherr von Neurath (* 1847; † 1912) was the royal Württemberg upper chamberlain, head of the chamberlain staff and landowner, his mother Mathilde (* 1847; † 1924) came from the knightly family of the barons of Gemmingen . After graduating from high school , Neurath completed his military service as a one-year volunteer in the infantry regiment "Kaiser Friedrich, King of Prussia" (7th Württembergisches) No. 125 . He studied law at the Eberhard Karls University in Tübingen and the Friedrich Wilhelms University in Berlin . In 1894 he became a member (later honorary member) of the Corps Suevia Tübingen . In 1897 he passed the legal traineeship exam, and in the following year he joined the Württemberg judicial service.

Career as a diplomat

After passing the assessor examination, Neurath was called up to the consular career of the Foreign Service in 1901 . Between 1903 and 1908 he was Vice Consul at the German Consulate General in London , after which he returned to the Foreign Office in Berlin. With the protection of Kiderlen-Waechter , he managed to switch to a diplomatic career at the turn of the year 1912/13. As Legation Councilor in the Political Department, he was appointed Counselor of the Embassy in Constantinople in 1914 , although he did not take up this post until the spring of 1915, as he had previously been a reserve officer in the Grenadier Regiment "Queen Olga" (1st Württembergisches) No. 119 during the First World War participated. In the Ottoman Empire Neurath witnessed the genocide of the Armenians with locally.

At his own request he was dismissed from service in the Reich at the end of 1916. He took over the post of head of the civil cabinet of the Württemberg king from his uncle Julius von Soden . Until the November Revolution of 1918 he remained the closest advisor to King Wilhelm II of Württemberg .

On December 13, 1919, with the approval of President Friedrich Ebert , he returned to the diplomatic service and became envoy in Copenhagen , held the post of ambassador to Rome from 1921 to 1930 and returned to London as ambassador from 1930 to 1932 .

Already after Gustav Stresemann's death in 1929, Reich President Paul von Hindenburg favored Neurath as the new foreign minister, but his appointment to this post was not possible at that time due to a lack of parliamentary support. It was only when Hindenburg formed a presidential cabinet under Franz von Papen that was no longer supported by the Reichstag in June 1932 that Neurath was promoted to foreign minister of this " cabinet of barons ". He retained his ministerial office in the following Schleicher and Hitler cabinets as an exponent of a conservative specialist civil service. With otherwise loyal cooperation within the Hitler government, it is known that von Neurath, like his cabinet colleagues Gürtner , Blomberg and Frick, campaigned for the lawyers detained by the Gestapo , the widow of the Catholic who was murdered in the course of the political cleansing wave in the so-called Röhm Putsch Politician Erich Klausener represented what contributed to their release from prison.

Neurath stood for a conservative, revisionist German foreign policy and actively supported the course of foreign policy dictated by Hitler (e.g. leaving the League of Nations , reintroducing compulsory military service or reoccupying the Rhineland ). Hitler, in turn, benefited not only from Neurath's reputation abroad, but also from the expertise of the ministerial bureaucracy he led. However, the Federal Foreign Office's freedom of action was increasingly restricted from around 1936 onwards by the competition between the Nazi foreign politician Joachim von Ribbentrop , who was acting in the background, and his Ribbentrop office .

On the occasion of the 4th anniversary of the seizure of power , Hitler awarded all non-party members of the Cabinet the Golden Party Badge of the NSDAP , making Neurath a member of the NSDAP ( membership number 3,805,229). On September 18, 1937, he received the rank of SS-Gruppenführer (SS-Nr. 287.680), which corresponded to the rank of Lieutenant General . Before that, he had already become a member of the National Socialist Academy for German Law founded by Hans Frank .

Until 1937 Neurath supported a "politics of strength" which aimed at annexing Austria, in the parlance of the National Socialists of both countries, at bringing Austria into line and finally leading to the Berchtesgaden Agreement . But he objected to war plans as announced by Hitler at the Hossbach Conference in November 1937. In the course of the Blomberg-Fritsch Crisis , Neurath was "promoted" to President of the Secret Cabinet Council, which never met, on February 4, 1938 , and was replaced as Foreign Minister by his party rival Ribbentrop. Until April 30, 1945, Neurath was formally a member of the Reich government as Reich Minister without a portfolio.

Reich Protector in Bohemia and Moravia

After the so-called smashing of the rest of Czech Republic and the invasion of German troops in Prague on March 15, 1939, Neurath - possibly as a gesture of appeasement towards the British - became Reich Protector in Bohemia and Moravia , where he was responsible for the suppression of the political culture of the Czechs and the Enforcement of the Nuremberg Laws was responsible. However, Hitler did not consider Neurath brutal enough to suppress the growing Czech resistance movement. He therefore gave him permanent leave of absence in September 1941 in order to transfer his powers of attorney to the deputy Reich Protector Reinhard Heydrich or, after his murder by Czech resistance fighters in mid-1942, to Kurt Daluege . In August 1943, Hitler complied with Neurath's repeated requests for dismissal in the course of a major change: Heinrich Himmler was promoted to Reich Minister of the Interior and Neurath was formally released from the office of Reich Protector, which the former Reich Minister of the Interior Wilhelm Frick took over.

In June 1943 Neurath had been promoted to SS-Obergruppenführer , which corresponded to the rank of general . On his 70th birthday, he received a donation of 250,000 Reichsmarks from Hitler .

On May 6, 1945 Neurath was captured by French troops and transferred to the International Military Tribunal in Nuremberg. There he was charged in 1946 with "conspiracy against world peace, crimes against peace, planning and conducting a war of aggression, war crimes" and " crimes against humanity " and sentenced to 15 years in prison.

On the initiative of the Vatican and with the approval of the Soviets, Neurath was released early from the Spandau war crimes prison in early November 1954 . Before that, the Soviets had categorically rejected any attempt at release or imprisonment.

After his release from prison on November 6, 1954, Neurath spent the last two years of his life on his Gut Leinfelder Hof near Enzweihingen.