Protectionism ( Latin: protectio 'protection') is a form of trade policy with which a state tries to put foreign suppliers at a disadvantage on the domestic market through trade barriers in order to protect domestic suppliers from foreign competition. Their opposite is free trade .

Tariff and non-tariff barriers to trade

Tariff barriers to trade have a direct impact on the prices of goods. The following measures can be cited as an example:

Non-tariff trade barriers are also measures that are used to limit imports from abroad, but do not have a direct impact on prices. The following measures can be listed as an example:

The aim is usually to promote certain products or industries in a country or to support the national economy in general. In addition, attempts are being made to enable the establishment of new, not yet competitive branches of industry, since these branches of industry would not withstand the pressure of the world market in the initial phase. Former developing countries such as the People's Republic of China were able to rise to emerging countries or industrialized nations. This was liberalized not countries with similar conditions on this path. It was similar with Germany (1874–1914) and the USA (1865–1900). In the USA, the dispute over future economic policy (free trade or protectionism) between the rural southern states and the industrializing northern states was a reason for the secession of the southern states.

In economic sectors that are considered important in terms of national security or the military interests of a country, even in countries that see themselves as champions of free trade, bans on foreign trade or restrictions on the free movement of capital are considered inevitable. In 2010, for example, the same arguments were put forward against the Chinese wireless network supplier Huawei . 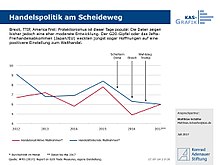 More free trade or protectionism? Overview of the development worldwide

Opponents of protectionism, on the other hand, call for global free trade and argue that protectionists ignore comparative cost advantages and other advantages of trade . From the fact that an exchange is only carried out if the object received is valued more than the exchanged - nobody exchanges in the expectation of being worse off after the exchange - you immediately infer that any restriction would reduce welfare.

“Difficulties arise only when a tariff is used to make an industry grow faster than it would without a tariff, or to protect it from adverse influences that would bring about its decline. In these cases, in order to subsidize a certain group, a sacrifice is imposed on all other producers and consumers. "

Von Hayek drew the following conclusion from his considerations: "The abolition of sovereign nation-states and the creation of an effective international legal order are the necessary complement and logical implementation of the liberal program."

In his book How Asia Works, the British author and business journalist Joe Studwell defends the protectionist policies of those emerging economies that have not followed the IMF's recommendations on trade liberalization. Countries that would have followed the recommendations of the IMF, such as the Philippines, Thailand and Indonesia, are experiencing economic problems today because they liberalized their markets too early and cut subsidies. China, Taiwan and South Korea, on the other hand, introduced strict financial controls, practiced protectionism, paid subsidies for dynamic export companies and thus gave domestic entrepreneurs air to breathe until they, and in particular the new industries, became competitive (so-called "Infant Industry Protection"). However, these subsidies are linked to the achievement of export surpluses.

Examples of protectionism in recent years

The steel dispute between the European Union and the United States was triggered in 2002 by a decision by US President George W. Bush to impose tariffs of 30 percent on steel imports from the European Union to protect the domestic steel industry . The EU Commission then decided to take countermeasures that included sanctions against US imports such as steel or clothing amounting to 2.2 billion euros. The World Trade Organization (WTO) arbitration tribunal declared the American punitive tariffs on steel imports to be incompatible with WTO rules.

For some years now, trade relations between the USA and China have turned into a paradigmatic case in economic theory and a political dispute with regard to free world trade. Nobel laureate in economics, Paul Krugman, considers protectionist measures by the USA against China's trade strategy , which he describes as “ mercantilism ”, to be an appropriate and inevitable counter-strategy. He cites Paul Samuelson , who viewed the free trade arguments as ineffective when confronting an underemployed economy with an economy that subsidizes exports.

The solar market is an example of the protectionist measures taken by the US against China. In May 2012, the US introduced punitive tariffs of 31 to 250 percent on Chinese solar companies.

Before this measure, the US and the EU sued China before the WTO because the People's Republic was accused of exploiting its monopoly on rare earths through export restrictions.

According to a study by the union-affiliated Economic Policy Institute , 2.4 million jobs were lost in the US between 2001 and 2008, which is mainly attributed to the imbalance in US-China trade. A study by the Brookings Institution assumes that the financial crisis will cause US consumer demand as a growth engine for the global economy to fail. It is expected that the US will have to export more itself to get its trade balance in order. In the event of weak growth in the global economy as a whole, politics would therefore move more in the direction of protectionism.

Due to Iran's violations of the UN Security Council resolutions and its refusal to start meaningful negotiations on the nuclear program, the EU member states decided in 2012 to ban imports of Iranian oil.

Before these sanctions came into force, however, the government in Tehran threatened to stop oil exports to Europe immediately, so that countries such as Greece, Spain and Italy did not have enough time to look for new oil suppliers and thus damage the local economy in the short term.

After the annexation of Crimea by Russia, the EU member states decided on economic sanctions against Russia. These included making it harder for Russian banks to access the European capital market, banning the export of armaments and weapons, and restricting the supply of cutting-edge technology required for oil production.

In return, the Russian Federation imposed import bans on dairy products, meat, fruit and vegetables from the EU countries, the USA, Australia, Canada and Norway.

The trade policy be justified by states more accurately, you can see the game theory use.

The numbers in the table represent how much benefit the respective player gets from the respective situation. The points on the left are to be assigned to the USA and the points on the right to Japan. The situation at the top left of the table is to be understood in such a way that the USA and Japan behave in a free-trade manner. At the top right of the table you can see the situation when Japan behaves in a protectionist manner towards the US, and vice versa for the bottom left. At the bottom right, both nations are protectionist towards them.

If both countries conduct free trade , this results in a benefit of 10 for both countries. In this situation, the countries benefit from the division of labor and thus both have a positive benefit if each country produces what it has advantages in production. In this situation, the companies of both nations are exposed to competitive pressure from abroad, with the result that companies have to close in the long term if the competition has clear comparative cost advantages .

If both countries apply protectionism, both countries will be harmed because instead of cooperating, each only seeks his own benefit for his company and tries to harm the foreign economy. The welfare gains through the division of labor are completely eliminated in this game situation, which is why this situation results in a negative benefit of −5 for both players.

Often political conflicts are responsible for the fact that nations give up the free trade / free trade game situation in order to damage the other nation and in this way force a change of course. However, the unilateral levying of protectionist measures usually results in countermeasures being taken.

This game-theoretic foundation can be compared with the often cited prisoner's dilemma . If there is no superordinate institution or set of rules that induces both players to behave cooperatively, each player chooses the strategy that is best for him, under the premise that the other player behaves in the same way. Without free trade agreements or higher-level bodies such as the World Trade Organization or the European Union, we often find ourselves in a situation where countries behave in a protectionist manner against one another.

From the perspective of the new political economy , further reasons can be found why countries are switching to protectionist action instead of orienting themselves towards free trade . The basic core of the new political economy (also called public choice or economic theories of politics ) is to explain political behavior, decision-making processes and structures using the methods and theories of economics . Individual and collective decisions by voters, politicians, parties, interest groups, etc. are analyzed.

According to the theory of international trade, a transition to free trade leads to the macroeconomic Pareto-optimal situation . However, this assumption does not apply to individual companies that are exposed to stronger competition from abroad in the course of trade liberalization. There is therefore a strong incentive for individual economic sectors or companies to organize themselves and to seek protectionism against foreign competitors or protection against imported goods in a political market. In this perspective, politicians and parties are providers of protectionist policies and offer them if they promise to increase their chances of re-election or if they have to assume that positioning for free trade will cost voters. Proponents of protectionism are usually strongly organized, as a change in tariffs has a direct effect on the actors concerned, while free trade interests are represented less, because the profits from this usually have an effect on the economy as a whole and individual actors who stand up against competition from abroad can claim to have an interest in selling their own goods abroad.