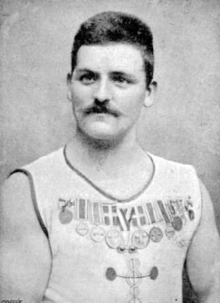 At the Olympic Games in Athens in 1896 , he won the weightlifting competition with both arms and became the first Danish Olympic champion in history. Jensen was declared Olympic champion with the same performance as his British rival Launceston Elliot , because Jensen had a "better" style. Elliott had taken a step forward.

In the competition with one arm , Jensen took second place behind Elliot. He won another medal in the shooting competitions : a third place in shooting with the free rifle over 300 m. In the athletics competitions he took fifth place in the shot put and took part in the discus throw .

Four years later at the Olympic Games in Paris , he could no longer build on these successes. He achieved the best placement with the Danish team in shooting with the large-bore rifle over 300 m. It took fourth place behind Switzerland, Norway and France.

Olympic champion in weightlifting with no weight limit