King Wilhelm II of Württemberg, on an official portrait photograph by Theodor Andersen (1892)

Prince Wilhelm was born the son of Prince Friedrich von Württemberg and his wife Princess Katharina von Württemberg , a daughter of King Wilhelm I of Württemberg . He was the only child of his parents and has been to the foreseeable childlessness of King Karl and Queen Olga of the duties of an heir educated.

He studied law , political science and finance at the Eberhard Karls University of Tübingen and the Georg-August University of Göttingen . Wilhelm joined the Prussian Army in Potsdam . After King Karl had become tired of his office in the last years of his reign , the young Prince Wilhelm took on representation duties instead.

From 1870, as Prince of the Royal House, Wilhelm was a member of the Württemberg Chamber of Notaries until his accession to the throne in 1891 . He was often represented there by other members of the Chamber, but also attended the meetings personally.

In 1877, Prince Wilhelm married Princess Marie zu Waldeck and Pyrmont . This marriage with a small princely house, a marriage of inclination, met with little enthusiasm in Württemberg.

The couple had three children, two of whom did not get past infancy. Only the daughter Princess Pauline (1877–1965) grew up and later became the wife of Prince Friedrich zu Wied (1872–1945). The son Prince Ulrich (* / † 1880) died in the year of his birth at the age of five months. The death of her son Prince Ulrich met the parents as a heavy blow, which should be another for the husband Prince William follow: In April 1882 Princess Marie died during the childbirth of her third child, who was not viable at birth.

Charlotte zu Schaumburg-Lippe, wife of Wilhelm II and since his accession to the throne, Queen of Württemberg. She lived at Bebenhausen Castle until her death in 1946

Prince Wilhelm married Princess Charlotte zu Schaumburg-Lippe for the second time in 1886 , and Prince Wilhelm's choice of a wife fell on an aristocrat from a less important dynasty.

No children were born from the marriage with Princess Charlotte zu Schaumburg-Lippe. Therefore, since the 1890s, Duke Albrecht von Württemberg , the scion of a Catholic branch line of the House of Württemberg , was introduced into the affairs of government as the future heir to the throne.

After the death of King Karl , the prince took office as King Wilhelm II in 1891. Many sovereign rights had fallen to the German Kaiser .

King Wilhelm maintained a rather upper-class lifestyle. Until the last days of his government he went for walks in Stuttgart without guard or company. He invited men from the bourgeoisie to gentlemen's evenings at his residence in the Wilhelmspalais in Stuttgart .

The king introduced health insurance for servants and agricultural workers in the country, and taxes in Württemberg were levied for the first time on the actual income of the citizens.

King Wilhelm II was distant from the Kaiser in Berlin, especially since he did not particularly appreciate the military during his life.

During the reign of King Wilhelm II, the International Socialist Congress (1907) was allowed to meet in Stuttgart.

Pieces were played at the court theater, the performances of which were banned in other countries of the empire, such as the works of Frank Wedekind , at whose performances in Stuttgart the king and queen were present together.

In 1867 Wilhelm became active in the Corps Bremensia Göttingen . In the winter semester of 1868/69 he was with Corps Suevia Tübingen . Suevia awarded him the ribbon in the three emperor year . He regularly attended the events of the Alt-Herren-Verein für Württemberg and Hohenzollern founded in 1886 . After ascending to the throne, he officially took over the protectorate of the AHV. He felt particularly at home in the familiar circle of old corps students. The song he used to ask (from Why should in life ) testifies to his humor :

I want to get intoxicated
Do not trade with princes
And in the delusion itself
Don't be king ...

Even after his expulsion and abdication, the now Duke Wilhelm was a student of the corps:

"The spirit of German corps students, the spirit of togetherness and loyalty will be one of the most useful and necessary building blocks in rebuilding everything that has now collapsed."

The outbreak of the First World War hit King Wilhelm II hard. With tears in his eyes he said goodbye to his troops in Stuttgart. His last adjutant general on duty was General of the Infantry Friedrich von Graevenitz since July 5, 1918 .

From the end of October 1918, the demonstrations and protest meetings against the existing social order increased. The abolition of the monarchy was also called for in Württemberg . During a meeting between the demonstrators and Interior Minister Koehler on November 4, 1918, the demonstrators admitted that King Wilhelm II - highly valued by his subjects - had behaved in an exemplary constitutional manner; One of the spokesmen, the Spartakist Seebacher, formulated the requested abdication as follows: "S'isch but wege dem Sischteem" ("But it is because of the system"). After a revolutionary crowd, some of whom were foreign leaders, entered the Wilhelmspalais on November 9, 1918, King Wilhelm II finally left Stuttgart in the evening towards Bebenhausen . He never got used to the fact that nobody stood by him in this situation. On November 30, 1918, he was the last of the federal princes to renounce the crown and took on the title of Duke of Württemberg. As early as November 29, 1918, the provisional government very accommodatingly assured him that, in addition to an annual pension of 200,000 marks and a lifelong right of residence in the Bebenhausen hunting lodge, he would retain the unrestricted right of disposal over his private property. He spent the last few years in Bebenhausen and more often in Friedrichshafen . 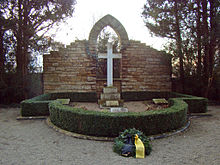 After he died in Bebenhausen on October 2, 1921, the funeral procession was diverted around Stuttgart in accordance with his last wish. In the old cemetery in Ludwigsburg , Wilhelm II was buried in an earth grave at the side of his first wife and son. His second wife was also buried in this family grave complex in 1946.

The citizens of Württemberg and their last king

Wilhelm II was regarded by his citizens as a popular and popular king. Even today, stories are often told how the residents of Stuttgart greeted their monarch while walking with his dogs (two points ) with the words: “Grüß Gott, Herr König” and Wilhelm II took off his hat in response and gave the children sweets. So it should not have been uncommon when children met their king, he was asked by them: "Keenich, hoscht mer nex?" - What should say: "King, you have nothing for me?"

Three of his eight great-grandparents were descended from Duke Friedrich Eugen von Württemberg, in the generation of great-great-grandparents he had only 10 instead of 16 different ancestors, Wilhelm II is an example of the loss of ancestry in the European nobility.