Friedrich Wilhelm Karl von Württemberg (born November 6, 1754 in Treptow an der Rega in Hinterpommern ; † October 30, 1816 in Stuttgart ) was Friedrich II. From 1797, the fifteenth reigning Duke of Württemberg, from 1803 to 1806 also elector and from 1806 until 1816 as Friedrich I. the first king of Württemberg . Because of his corpulence he was also called Fat Friedrich , and because of his absolutist-authoritarian style of government by the historian Paul Sauer, he was also called Swabian Tsar . However, the latter term is now being questioned in research.

The way to the throne 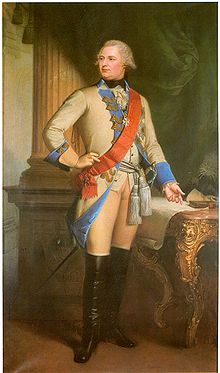 Friedrich was the son of Duke Friedrich Eugen von Württemberg and Sophie Dorothee von Brandenburg-Schwedt . His father was the youngest son of Duke Carl Alexander , and so it was not foreseeable when he was born that he would succeed to the throne in Württemberg. Like his father, he pursued a military career at the court of Frederick the Great . This involved the Württemberg family staying at his court in his marriage plans. Friedrich's sister Sophie Dorothee von Württemberg was married to the son of Catherine the Great and later Tsar Paul . This kinship with the Tsarist family had immediate consequences for Friedrich and far-reaching consequences for the later Kingdom of Württemberg at the latest when Europe was reorganized in the course of the Congress of Vienna .

In June 1774 he entered Prussian service and became a colonel in the Lölhöffel cuirassier regiment , and in December 1776 he became its commander. With the regiment he took part in the War of the Bavarian Succession . In 1778 he took over the Dragoon Regiment No. 2 ( Krockow ). In 1780 Friedrich married Princess Auguste Karoline von Braunschweig-Wolfenbüttel . Together they had two sons, Wilhelm, who was to become the second King of Württemberg as Wilhelm I , and Paul , as well as their daughter Katharina , who later married King Jérôme von Westphalen . Another daughter was not even a year old. The good relationship with Frederick the Great, Frederick regularly took part in the famous rounds of talks, deteriorated when Frederick's sister Elisabeth was betrothed to Archduke Franz of Austria , who later became the last Emperor of the Holy Roman Empire and the first Emperor of Austria , in 1781 . Frederick the Great had to fear that after Russia and Austria had already become closer politically, Prussia would be further isolated by the close family ties - both ruler's wives were sisters. Frederick the Great blamed Friedrich for arranging this engagement, probably wrongly.

In 1781 he took his leave as major general. He went into the service of Empress Catherine the Great . This appointed him lieutenant general and from 1783 to 1787 appointed him as governor general in Russian Finland , which at that time only included the area around Vyborg . From June to October 1783 he was also in command of a 15,000 to 20,000-strong troop corps near Cherson in the war against the Turks, but was not significantly involved in any fighting.

The marriage between Friedrich and Auguste Karoline was strained from the start. The then 16-year-old was inferior in her childish playfulness to her ten-year older husband. This was intellectually ahead of her and self-confident to the point of being opinionated. In 1781, already pregnant, she wanted to separate, but was urged by her father to stay with Friedrich. In Russia the contrast intensified. There was even violence. In December 1786 she threw herself before Tsarina Katharina for help after a performance. She, who was aware of the situation, did not hesitate, took Auguste Karoline into her care and expelled Friedrich from the country. In addition, her own relationship with her son and heir to the throne had also deteriorated and Friedrich, as the brother of the daughter-in-law, also got into the line of fire. Friedrich sold his Monrepos estate near Vyborg in 1788 to Ludwig Heinrich von Nicolay . Auguste was brought into the care of the sixty-year-old, farewell Hofjägermeister von Pohlmann at Lohde Castle in West Estonia , who abused this trust. Auguste Karoline died on September 27, 1788 after a miscarriage when she was refused any medical help to cover up the pregnancy.

Caricature of James Gillray on the marriage of Hereditary Prince Frederick of Württemberg to Charlotte Auguste Mathilde of England.

In the meantime it became foreseeable that Friedrich might one day succeed the throne in Württemberg. In July 1789 he traveled to Paris to get a firsthand impression of the revolutionary goings-on. From 1790, much to the displeasure of his uncle Carl Eugen, who was still in power, he moved to Ludwigsburg. When his father took office in 1795, he finally achieved the political influence that had long been hoped for. With the help of his Braunschweig father-in-law, he made contact with the English royal family from Hanover. On May 18, 1797 he married Princess Charlotte Auguste Mathilde of Great Britain and Ireland , daughter of King George III. and Queen Charlotte in St. James Church in London .

After the death of his father on December 23, 1797, Friedrich became the ruling Duke of Württemberg as Friedrich II . He was considered power-conscious and choleric, but also a determined politician. The first years of his government were marked by violent disputes with the estates , who had considerable legal rights in the Duchy of Württemberg. Some representatives of the state council, such as Christian Friedrich Baz , campaigned for the preservation of the Württemberg constitution despite violent measures on the part of the duke . With the help of Napoleon Bonaparte , Friedrich succeeded in 1805 in smashing the power of the estates and abolishing the constitution.

In Ludwigsburg Palace , which he used as a summer residence, he had numerous rooms redesigned in the Empire style.

In the early summer of 1800, Württemberg was occupied by French troops. Duke Friedrich fled the country and spent a year in exile in Erlangen . In 1801 he moved closer to France and Napoleon, who was gaining more and more power, and returned to Württemberg.

In May 1803 Duke Friedrich II was made electoral prince and entrusted with the "Archbanner Office". The Reichssturmfahne , since 1336 in the hands of the House of Württemberg, he therefore moved to the first place of the electoral heart shield. In the course of secularization and mediatization , he was able to significantly enlarge his dominion. With the help of his interior minister, Count Philipp Christian von Normann-Ehrenfels, he initially consolidated the newly acquired territories into a separate state called “ Neuwuerttemberg ”, which was ruled from Ellwangen (Jagst) .

In October 1805, Emperor Napoleon himself came to Ludwigsburg to finally bind the Elector to himself. He promised him the royal dignity. At the meeting, Friedrich is said to have confronted the emperor very confidently. (An anecdote reports that Napoléon looked up to Friedrich, who was 2.11 m tall and weighed about 200 kg, and said: “I didn't even know that the skin could expand that far!” To which Friedrich replied: “And I'm amazed that there can be so much poison in such a small head! ") 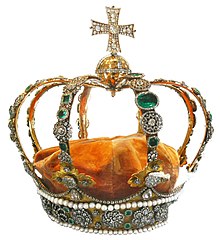 Royal crown in the old castle

On January 1, 1806, Elector Friedrich accepted the royal dignity. Additional areas came to Württemberg, which was now almost twice as large as before 1803. In addition to the Protestant " Old Württemberg ", large Catholic areas were part of the kingdom, so that the king sought equality for both denominations . The old Württemberg state constitution was adopted by the king under the leadership of Prime Minister Count Wintzingerode the Elder. Ä. eliminated like a coup. The country was organized uniformly and received a tight, enlightened absolutist administration. The previous, collegially composed Secret Council was replaced as the highest government authority by a state ministry . It was divided into departments and was headed by the cabinet minister. Friedrich became the founder of the modern Württemberg state. King Friedrich pushed the unification process forward with tough authority, often without taking into account the traditions of the newly acquired territories. Württemberg joined the Rhine Confederation , which was under Napoléon's protectorate, in 1806 , with King Friedrich subsequently proving to be its most independent member. Napoléon's youngest brother, King Jérôme of Westphalia, married Frederick's only daughter, Katharina, thus joining the Bonaparte family with one of the oldest dynasties in Europe.

Württemberg's alliance with France meant that soldiers had to be provided for Napoleon's wars against Austria and Russia. In the Russian campaign of 1812 about 12,000 Württemberg soldiers fought with, of which only a few hundred came back. In 1814 King Friedrich changed sides. Württemberg now took part in the battles against Napoleon. After the collapse of the Napoleonic system, King Frederick asked his daughter Catherine to separate from Jérôme. She refused, however, and stayed by his side. Thereupon the ex-king of Westphalia received the Württemberg title "Prince of Montfort". Katharina's son, Prince Plon-Plon, is the progenitor of today's Bonaparte family , which is descended from King Friedrich. 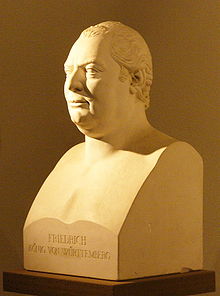 Bust of Friedrich in the burial chapel on the Württemberg

The first two decades of the 19th century by heavy were overshadowed crop failures , which in the crisis of 1816-17 culminated. On October 30, 1816, King Friedrich died in Stuttgart after a brief illness. While visiting a place where mammoth tusks were found on the Cannstatter Seelberg he contracted the fatal pneumonia . He was buried in the crypt of Ludwigsburg Palace .

In 1811, the city ​​of Ulm gave the newly created city park “Gänshölzle” the name “ Friedrichsau ”, which is still used today, and thereby thanked Friedrich for a generous donation from Friedrich for the benefit of this recreation area.

Wilhelm I of Württemberg donated the Order of Frederick in 1830 in memory of his father Friedrich .

According to Ina Ulrike Paul , Friedrich wrongly bears the designation “Swabian Tsar” given to him by the historian Paul Sauer . According to her, the Duke's authoritarian style of government against the estates was a realpolitical necessity during the Napoleonic Wars. Due to the conflict between the estates and the duke, it was difficult to predict the foreign policy of Württemberg. The great powers of Europe involved in the First and Second Coalition War therefore viewed Württemberg as a possible territorial “object of exchange and compensation”. An insecure alliance membership endangered the state existence of Württemberg. For this reason, according to Ina Ulrike Paul, Friedrich tried to eliminate the estates as an independent foreign and military policy factor. The pro-French estates, for example, spoke out in favor of maintaining a land militia. In their opinion, subjects capable of war were only to be drafted as soldiers if war broke out immediately. The duchy should not maintain an army in peacetime. The pro-Austrian Duke of Württemberg considered this to be insufficient due to the foreign policy situation and his officer experience in the Prussian and Russian armies. He called for the establishment of a contemporary professional army based on the Prussian model. The army should continue to exist in peacetime. In addition, Friedrich wanted to prevent the Württemberg estates from continuing to lead the Duke's foreign policy course "ad adsurdum" with their own envoys abroad.

Second marriage: Friedrich married Princess Charlotte Auguste Mathilde of Great Britain (1766–1828), daughter of King George III, in London in 1797 . The couple's only child, a daughter, was born on April 27, 1798 and died on the same day.