Gold of the Scythians 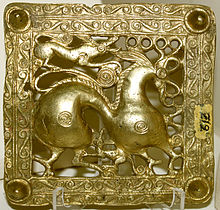 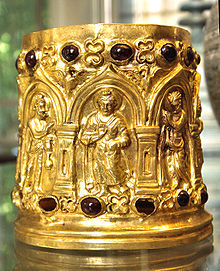 The bimaran reliquary from Afghanistan is often viewed as a Graeco-Scythian work.

Under the title “ Gold of the Scythians ”, a collection of archaeological finds from Scythian graves ( Kurgane ) was shown in various museums around the world . In addition to body jewelry (neck, arm and finger rings), thousands of patches made of thin gold sheet in relief were found, which mostly served as garments, but were also attached to tapestries and other textiles for decoration.

Little is known about Scythian gold mining. Some information on the origin of the raw materials is historically handed down by Herodotus (484–425 BC) in his “ Historien ” (Book I and IV). In the region around Krasnoyarsk and Daurien , gold panning was discovered at the beginning of the 20th century , which is assigned to the Scythians. Since gold deposits are not known either in the northern Pontic region or in the neighboring areas to the north, it is usually assumed that the gold was acquired by the Scythians through trade or captured on military expeditions. In the case of the Greco-Scythian goldwork, it is assumed that it was not made by Scythian goldsmiths , but that it is commissioned work.

The sources of raw materials are previously thought in the following regions:

Commons : Art of the Scythians  - Collection of images, videos and audio files