This article is limited to an overview of the Herodotus histories. The interpretation and reception aspects concerning the author and his work are assigned to the article on the person of Herodotus .

The histories ( ancient Greek ἱστορίαι historíai , German 'explorations' , 'inquiries') of Herodotus are the only surviving work of the Greek writer. The history includes nine books and was written in the 5th century BC. Written in BC. It provides an overview of the historical processes from around 700 to 479 BC, i.e. represents a period of around 220 years. The main reference point of the representation are the Persian Wars at the end of this period, which are of decisive importance for the further course of Greek antiquity were.

Contents of the Histories of Herodotus

The structure of the content with indication of the section numbers follows the Tusculum edition of Feix 2001 cited below. The basic structure of the histories is given by the Achaemenid great kings Cyrus II , Cambyses II , Dareios I and Xerxes and their deeds and campaigns, i.e. by the historical line of kings of the "enemies" or "barbarians", not through Greek personalities or events. The opening credits in book 1 about the Lydians and their king Kroisos and the whole book 2, which is dedicated to the land of Egypt and its history, deviate from this basic structure . (However, Book 2 serves as a preparation for the presentation of the conquest of Egypt by Cambyses in Book 3 and thus fits in with the Cambyses section of the complete work.)

Book 1 - The Lydians and Kroisos. Cyrus: submission of Asia Minor, Babylonia and the massagers 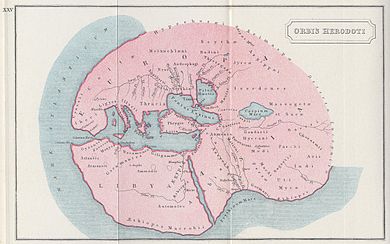 Book 2 - The land of Egypt and its history

Book 3 - Cambyses: Campaigns against Egypt and other countries. Beginning of the Darius rule

Book 6 - Darius: End of the Ionian Rebellion. Campaigns against Greece

Book 8 - Xerxes: Continuation of the campaigns against Greece