The title of this article is ambiguous. Further meanings are listed under Krasnoyarsk (disambiguation) .

Krasnoyarsk ( Russian Красноярск ,  [ krəsnɐˈjarsk ] ) is a city in Russia on the Yenisei River and on the Trans-Siberian Railway . With 973,826 inhabitants (as of October 14, 2010), Krasnoyarsk is the third largest city in Siberia after Novosibirsk and Omsk . It is the capital of the Krasnoyarsk region and about 3360 km east of Moscow .

The city is divided into seven Rajons (districts): 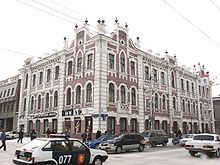 A historic house in Krasnoyarsk

Krasnoyarsk was founded in 1628 as an Ostrog (wooden fortress) by a Cossack association as "Krasny Jar" ( beautiful or red steep slope , derived from an earlier Turkic-speaking name of the place) by Andrei Dubenski to protect Yenisysk from attacks by the Kyrgyz people . The newly established settlement was four days' ride from Yenisseysk on the northern border of Kyrgyz settlements. The Kyrgyz attacked the new fortress, but could not take it. 1690 was Russia , Siberia is permanently attached, and Krasnoyarsk was awarded city status. After the peace with Manchuria in 1728, Krasnoyarsk increasingly lost its strategic importance as a military outpost. Despite the future peaceful life, the city did not grow. A fire in 1773 devastated almost the entire city, only 30 houses were spared. At the end of the 18th century the population was 850 men , 80% of them soldiers. In 1807 the founder of the Russian-American trading company Nikolai Resanov died of a cold in the city on his way back from California to Saint Petersburg . At the presumed location of his burial place there is now a tomb.

On December 12, 1822, the Yenisisk Governorate was established under the newly established Eastern Siberian Governor General (Governor General Lawinsky ), whose capital was Krasnoyarsk. At that time, a telephone station, elementary school, a girls 'high school, teachers' seminar and a crafts school were opened. Merchants, craftsmen and gold mine owners moved to Krasnoyarsk. The first stone buildings were erected, a park laid out and a printing shop opened. With the construction of the Trans-Siberian Railway in 1895, which connected Krasnoyarsk with the center of Russia, the city experienced an economic boom. On December 6, 1896, the first train of the Trans-Siberian Railway arrived in Krasnoyarsk. Three years later the railway bridge over the Yenisei was opened (by Yevgeny Knorre and Lavrent Proskuryakov ) and Krasnoyarsk became the largest transport hub in Siberia. In 1897 Lenin was exiled to Siberia for three years, to Shushenskoye south of Krasnoyarsk.

Before the Second World War , 40,000 people lived in Krasnoyarsk. The city grew through evacuation of the civilian population from the western part of the Soviet Union during the war and political exile . Between 1938 and 1956, a million people were deported to the West Siberian region of Krasnoyarsk and used in forced labor . In 1941 the locomotive works " Krasny Profintern " relocated to Krasnoyarsk started work. Other war-risk industries were behind the Ural moved to Krasnoyarsk. In the course of the war, the industrial capacity increased sevenfold, so that Krasnoyarsk overtook Irkutsk and became the industrial center of Eastern Siberia. In September 1961, the first cubic meter of concrete for the construction of the Krasnoyarsk hydropower plant was processed and the municipal bridge (length: 2100 m) was put into operation. Construction of the Krasnoyarsk Metro began in the mid- 1990s . In 1987 the October Bridge over the Yenisei was opened (length: 5000 m, width: 41 m). 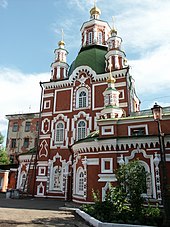 Church of the Protection and Intercession of the Virgin Mary (1795)

10 ruble note with motifs from Krasnoyarsk

Municipal bridge over the Yenisei in Krasnoyarsk

Krasnoyarsk train station on the Trans-Siberian

Railway bridge over the Yenisei

Three landmarks of the city are depicted on the 10-ruble note - which has been replaced by coins since 2009: the Paraskewa-Pyatnitsa chapel, the municipal bridge over the Yenisei and - on the back - the power station on the Krasnoyarsk reservoir .

The Paraskewa- Pyatnitsa chapel ( Часовня Параскевы Пятницы ) is enthroned on a hill Karaulnaja (literally: "guard hill") above Krasnoyarsk. Originally there was a pagan shrine, later a watchtower of the Krasnoyarsk fortress. The chapel was built in 1804 and rebuilt from 1852 to 1855 by the architects J. Alfejew and J. Nabalow. It was not used in Soviet times and fell into disrepair. It was not until perestroika that she was accepted back into the Yenisei diocese.

Near the Municipal Bridge is the historical and ethnographic museum in an Egyptian-style building with a large collection of old photos of Siberia.

The former Lenin Museum was opened in 1987 and next to it on the Yenisei is the restored river steamer Svjatitel Nikolai , with which Lenin and his companions drove upstream to Minusinsk into exile.

Prospect Mira is the main shopping street for Krasnoyarsk residents. It has been renamed five times: first it was called Great Street, then Voskressenskaya Street - after the name of the first three-story stone Voskressenskaya church that was built on Strelka in the middle of the 19th century. After the First World War it was the Soviet street, later it was called Stalin Prospect and today Prospekt Mira ("Avenue of Peace").

In the southwest of the city, the Transsib crosses the Yenisei on the 940 m long Krasnoyarsk railway bridge . It was built between 1893 and 1896 according to a design by Yevgeny Knorre and Lawr Proskuryakov and was awarded at the Paris World Exhibition in 1900 .

Near the eastern end of the bridge is the house of the Siberian merchant, book lover and collector G. W. Judin. He had compiled a private library of around 80,000 volumes. It was bought by the American Library of Congress in 1906 and forms the cornerstone of their Russian collection.

An unofficial landmark of Krasnoyarsk, visible from afar from many parts of the city, is an unfinished, 28-story office tower. Its construction began shortly before perestroika and stopped in the turmoil of upheaval .

In the vicinity of Krasnoyarsk is the famous nature reserve " Stolby " ("Pillars", Russian: Столбы ). The name comes from the rock pillars that are up to 100 meters high.

One of the largest ship lifts is located 35 km to the west near Divnogorsk on the Yenisei . It is designed as an inclined elevator and serves to overcome the barrage of the Krasnoyarsk reservoir .

The Krasnoyarsk Children 's Railway, popular not only with children, circles in the city's central park.

The city is also represented in football by the Yenisei Krasnoyarsk club . In 2018, the first promotion to the highest Russian league level ( Premjer League ) was celebrated. Home games are played in the city's central stadium , which has a capacity of 15,000 and was opened in 1967.

Several other industrial giants are also based in Krasnoyarsk:

Close to the city of Krasnoyarsk is one of the largest underground industrial complexes in the world, the "Mining and Chemical Combine" Zheleznogorsk (formerly Krasnoyarsk-26), a previously top-secret company that has been shielded from the outside world since it was founded in the 1950s Among other things, material for the Russian nuclear weapons program was produced in three plutonium reactors .

Russia's first repository for radioactive material is scheduled to go into operation in 2011 in Krasnoyarsk.

In the city is the administration of the Krasnoyarsk Railway , the branch of the Russian Railways , which operates the Trans-Siberian Railway on the route kilometers 3713 to 4489 and its branches on this section, for example to Abakan in Khakassia .

Plan of the future Krasnoyarsk Metro

The Krasnoyarsk Metro has been under construction since 1994. The opening has been postponed again and again, mainly due to insufficient funding. The work has been suspended since 2008 for financial reasons.

On July 14, 2006, the foundation stone was laid for the new freight terminal at Jemeljanowo International Airport . The project managers are AirBridge Cargo (ABC), KrasAir, Swissport and representatives from the administration. Another airport for regional traffic is Cheremshanka Airport , located just east of Yemelyanovo . Its main building was completely destroyed in a fire on December 19, 2011 after a short circuit.

Krasnoyarsk is connected to the Trans-Siberian Railway , which runs from Moscow through the city and all of Siberia to Vladivostok on the Pacific .

The city lies on the transcontinental road connection from Moscow to Vladivostok ( R255 ). At the same time Krasnoyarsk is the starting point of the 1,111-kilometer diversion R257 , the south on the west bank of the Krasnoyarsk reservoir of the eponymous Yenisei along to Abakan (capital of Khakassia ), to the right of the Yenisei to Kyzyl (capital of Tuva ) and on to Zagan Tolgoi to the border with Mongolia leads.

Several colleges and universities are located in Krasnoyarsk:

Krasnoyarsk has also had a large opera and ballet theater since 1978 .

→ Main article : List of personalities of the city of Krasnoyarsk

Administrative division of the Krasnoyarsk Territory