The title of this article is ambiguous. Further meanings are listed under Omsk (disambiguation) . 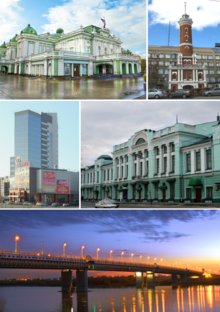 Omsk lies at the confluence of the Irtysh and Om rivers . The city is divided into five districts (okrug / округ), four of which are to the right of the Irtysh: 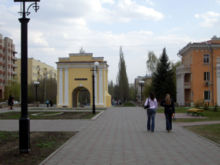 Omsk was founded in 1716 by the troop of the German-born Lieutenant Colonel of the Russian Army, Johann D. Buchholz, as a border fortress for the protection of Russia against attacks from the southeast, but also as a base for the further development of Siberia . Under the influence of Commander-in-Chief Iwan Iwanowitsch Springer, a brickwork fortress was built on the eastern bank of the Irtysh in 1768, which was modern for the time. This helped Omsk to continue to exist as a strategically important military base. Omsk has been a city since 1782. In the 19th century, Omsk was a place of exile for dissidents such as Fyodor Dostoyevsky and the Decembrists . In 1822 the General Government of West Siberia was formed. In 1838 the head office was moved from Tobolsk to Omsk. From 1882 to 1917 the city was the administrative center of the Generalgouvernement of the Steppe . Until 1918, the headquarters of the Siberian Cossack army was in Omsk . After the outbreak of the October Revolution and the Russian Civil War , the city was occupied by the White Guards . From 1918 to 1919 Omsk was the residence of the anti-communist government of Admiral Kolchak . In November 1919 the city was captured by the Red Army . Omsk has been the administrative center of Omsk Oblast since 1936 .

At the beginning of the 20th century there was strong economic growth with the opening of the Trans-Siberian Railway in 1895. Omsk became an important trading city in Siberia. Cities in the taiga north of Omsk are supplied via the port on the Irtysh River .

During the Second World War , countless industrial companies were relocated from the European part of the Soviet Union to Siberia. As a result, Omsk developed into an important producer of armaments for the Red Army . The city grew threefold within a few years. Factory No. 174 (Voroshilov Factory) also manufactured the legendary T-34 tank.

After the Second World War , Omsk became one of a few closed cities in the Soviet Union, to which foreigners up to perestroika and glasnost were not allowed to fend off espionage attacks in the Omsk military and space industries.

Omsk is now the location of the 33rd Missile Army.

In the area around Omsk you can still find many Russian- Germans, for example in the German national circle Asowo , who were exiled from the Volga region to Siberia and other parts of the Soviet Union during the war years . Numerous villages not far from Omsk (especially in the Rajon (district) Moskalenki and Issilkul ) were founded by Russian mennonites ; A large number of these Low German ( Plautdietsch ) speaking Mennonites still live there today . 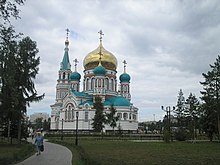 The Omsk Cathedral of the Assumption of the Blessed Virgin Mary

Omsk is an art and cultural center and has a beautiful old town with facades from several centuries. The St. Nicholas Cathedral (1838–1840) by Vasily Stassow and the Railway Academy by Fredrik Lidvall , who built the Grand Hotel Europe in Saint Petersburg , are a few examples of an architecturally interesting city through and through. Examples of modern architecture are the musical theater in the form of a ski jump or the trading center from the 1980s.

The city of Omsk has 83 libraries, nine museums and several theaters. The oldest, the Schauspielhaus, is over 130 years old. The Philharmonic and the Russian Folk Choir also have a good reputation beyond the borders of Siberia.

The Omsk Picture Gallery is located in the magnificent Governor's Palace (1859–1862). The large collection includes works by Ilya Repin , Ivan Aivazovsky , Vasily Surikov and many works by Mikhail Vrubel . With this and other collections, Omsk is at the top of the Siberian art museums.

The great Archaeological and Ethnological Museum has an extraordinary collection, including a mammoth skeleton, archaeological finds and works by the Russian avant-garde .

Three different marathons take place in Omsk every year, namely the Siberian International Marathon (SIM), the Marathon Handicap Omsk and the Siberian Ice Marathon (so-called Omsk Christmas Marathon ). The SIM is one of the most important marathons in Russia, which has been held every first Saturday in August since 1990 and has a certificate from the Association of International Marathon Running (AIMS). The handicap has been run every third Sunday in May since 1996.

The Siberian Ice Marathon takes place for the Russian Christmas festival. It is a half marathon that is run at temperatures around −20 ° C, which poses a special challenge for the athletes. The coldest run took place in the winter of 2001 on January 6th at −42 ° C. The journalist Tom Ockers took part in this run and published a book about it.

With the HK Awangard Omsk , the city provides an ice hockey club in the Continental Hockey League (KHL) . The team were Russian champions in 2004. Its home arena is the Omsk Arena multi-purpose hall, which was completed in 2007 and has almost 10,318 seats and is used for concerts and exhibitions in addition to ice hockey games. Like the football club Chelsea FC, it belongs to the billionaire Roman Abramowitsch . In football , the city is represented by the FK Irtysh Omsk club . The Olympic champions Alexei Tishchenko (boxing), Irina Tschaschtschina (gymnastics) and Yevgenija Kanajewa (rhythmic gymnastics) come from Omsk .

In the 1950s and 1960s, Omsk developed into a major center of petrochemicals . The most important branches of industry are also mechanical engineering, equipment manufacturing, electronics, light and food and woodworking industries. The production of spacecraft, engines, agricultural machinery, petroleum and gas equipment, and building materials are relevant.

In terms of economic power, the city ranks fourth in Russia behind Moscow , Saint Petersburg and Yekaterinburg . Well-known companies include:

Public transport in the city is handled by the city ​​traffic administration . The main load of the local public transport system is carried by buses and trolleybuses typical of Russia . The tram leads a shadowy existence. The Omsk Metro has been under construction since 1992. The opening has been postponed again and again, mainly due to insufficient funding. The first station of the Alexander Pushkin Library was only opened in 2011 . Completion is not yet in sight, construction has been inactive for years.

In the reception building of the Omsk main train station

Omsk is connected to the European part of Russia via the M51 / M5 highways . This leads via the Ural metropolis of Chelyabinsk to Moscow . At the same time, the city is the starting point for the A320 junction , which leads in a south-easterly direction to the Kazakh border and on Kazakh territory via Pavlodar , Semei (Semipalatinsk) and Saissan to the border with the People's Republic of China at Maikaptschigai . The 632 km long R402 connects Omsk with Tyumen in the southern part of the West Siberian lowlands .

Omsk also has an airport that is served by several companies (including Aeroflot via Moscow). Omsk was temporarily the main base of a smaller society ( Omskavia ). Omsk is still connected to the Trans-Siberian Railway , which runs from Moscow through the city and all of Siberia to Vladivostok on the Pacific .

Every fourth resident in Omsk studies at one of the 20 colleges and universities . 44 research institutes, including a branch of the Russian Academy of Sciences, are active in Omsk. In addition to the four universities (University of Railway Transport, Technical University, Classical University and Pedagogical University), the Medical Academy, the Sports Academy and the Legal Academy are among the leading universities of applied sciences in Russia.

The following educational institutions are located in the city:

The asteroid (3406) Omsk , discovered by Bella Burnasheva , has been named after the city since 1992.

→ Main article : List of sons and daughters of the city of Omsk

Administrative division of the Omsk Oblast