The title of this article is ambiguous. Further meanings are listed under Pensa (disambiguation) .

Penza ( Russian Пенза , scientific transliteration : Penza) is a Russian city about 550 kilometers in a straight line south-east of Moscow on the river Sura . It has 517,311 inhabitants (as of October 14, 2010). the largest city in Penza Oblast and its administrative center.

Penza was founded in 1663 as part of the fortification to secure the Russian Empire on the southeastern border against attacks by the Crimean Tatars by ukase from Tsar Alexei Mikhailovich . In 1716 Penza became provincial capital within the Kazan Governorate and in 1796 later the capital of the Penza Governorate . When, on February 7, 1939 by splitting off Oblast Tambov the Oblast Pensa came, the city was determined to be the administrative center.

The city is an important railway junction with five train stations (the most important are the central station Penza I and the marshalling yard Penza V) and has an airport that has been open to civil traffic since 2004. Penza is located on the M5 trunk road , which is part of European route 30 . The city is connected to Nizhny Novgorod , Saransk and Saratov by the R158 trunk road . At the same time, the city is the end point of the R208 , which leads east from Tambov .

The German Felix Schoeller Group operates the Mayak-Technocell paper mill in the city. The historically important computers of the Soviet Union of the Ural type were manufactured in Penza between 1956 and 1964 .

Seventeen kilometers south-east of Penza is the Leonidowka chemical weapons warehouse , in which almost 7,000 tons of nerve gas are stored. From the Second World War , the area repeatedly served as a regional, but also an international hub in the chemical weapons business. As early as 1993, soil samples showed that the limit values ​​for arsenic and dioxins were massively exceeded . In 2001, the rehabilitation of the contaminated surrounding area began. 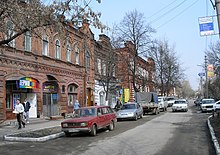 A street in the center of Penza

The Penza planetarium is located in the city park and is a locally significant historical and cultural monument, which was installed in an older hydrometeorological facility in 1954.

The ice hockey club HK Disel Penza participates in the game of the second highest Russian league . In football , the city is represented by the FK Zenit Pensa club . The rugby team Imperija Pensa is based in Penza . From 2006 to 2012, an annual tennis tournament Penza Cup took place in Penza .

→ Main article : List of personalities of the city of Penza

Celebrities who lived and worked in Penza