Cheboksary ( Russian Чебокса́ры , Chuvash Шупашкар / Şupaşkar ) is the capital of the Russian Federal Republic of Chuvashia in the Volga federal district . It is the most important industrial location and cultural center of the republic.

Cheboksary is located in the east of the Russian plain 668 km from Moscow , on the right bank of the Volga between the tributaries Sura and Swijaga.

The city of Cheboksary is divided into three administrative districts:

On March 2, 2008, at the same time as the presidential elections, a referendum on the unification of the two cities took place in Cheboksary and Novocheboksarsk . This plan failed, however, as 63% of the citizens of Cheboksary voted in favor, but only 38% of the residents of Novocheboksarsk.

The city is located in the temperate continental climate zone . The weather in Cheboksary is also heavily influenced by the Volga. In the city center and in the northern parts of the city in particular, it is windier and a little cooler than in the rest of the city. In general, the wind blows weak to moderate from the south or west, in summer from the north-west. Summers are generally warm to hot and winters are generally cold. Temperatures often rise above 30 ° C in July and August, plus an average annual humidity of 75%. In January and February the values ​​can drop to below −30 ° C. The mean annual rainfall is 554  mm . The warmest month is July with an average of 18.8 ° C and the coldest is January with an average of −12.9 ° C. Most of the precipitation falls in July with an average of 71 millimeters, the least in February and March with 24 mm. At the end of winter there is 30 to 40 cm of snow. The lowest temperature ever measured was −46.8 ° C in January 1942 and the highest was 37.9 ° C in July 1971.

The main industries are mechanical engineering and metal processing, chemistry, light industry, food industry, forestry, wood processing and construction industry. The Traktornye Sawody Holding is based in Cheboksary. About 13 kilometers downstream from the city center is the dam of the 2,274 km² Cheboksarsk reservoir with a hydropower plant with an installed capacity of 1404 megawatts. 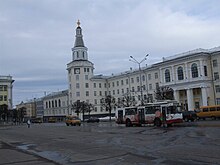 Public transport on the Republic Square, behind it the Chuvash State Agricultural Academy

Cheboksary is directly connected to the two Russian highways M7 Volga and R176 Vyatka . In addition, the "Чувашия" train runs regularly from the Kazan train station in Moscow to Cheboksary. There is also a connection to Kanasch and Kazan . Most of the local public transport is covered by the trolleybus network. There are also 16 bus routes and 35 Marshrutka routes within the city . There are also marshrutkas that connect Novocheboksarsk and the surrounding villages with the capital. The fare in the overland marshrutkas depends on the length of the route. There is also an airport 7 km southeast of the city with regular connections to Moscow-Domodedovo . Not far from the center is the tourist port of Cheboksary. As long as the Volga is still ice-free, tourist ships dock there. A passenger ferry runs only in summer and connects the city with the beaches on the other side of the Volga. 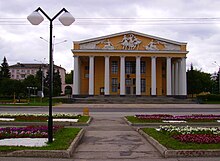 The Chuvash National Museum, located on the Salif, is the largest museum in the city and shows, in addition to the history of the region from the Ice Age to the time of the Soviet Union, the native fauna and gives an insight into the Chuvash culture. There are still two museums in the center of Cheboksary: ​​the geological museum and the beer museum, which reopened in January 2009. A museum with the original log house in which he lived is dedicated to the Russian revolutionary leader Vasily Tschapajew , who lived in Cheboksary for a time. Almost 20,000 graphics and sculptures by local and foreign artists are exhibited in the Chuvash Art Museum. There are also constantly changing exhibitions. There are also the following museums in the city: House for Chuvash Folk Art, Ivanov Literature Museum, Sespel Literature Museum, Forest Museum and some galleries, such as the art gallery on the Volga.

In the city is the Chuvash National Library with over 2 million media units, 40,000 of which are books in the Chuvash language. Its history goes back to 1870. Two other larger libraries are the central city library of Cheboksary and the scientific library of the Chuvash State University . There are also 25 small libraries and branches in the city.

Cheboksary, with its numerous schools, high schools, vocational, technical and technical colleges, is one of the educational centers of the Volga region . There are almost 70 schools in the city, including five grammar schools and three lyceums, which enable education up to 11th grade. Some of these schools are special language, sports or music schools or schools with a scientific focus. The city also has over 20 different vocational and technical colleges that offer a wide variety of training courses.

A sports high school for the Russian Olympic team is also located in the city. There is also a branch of the Nizhny Novgorod Academy of the MWD in Cheboksary.

Administrative division of the Chuvash Republic