Antalya (from ancient Greek Ἀττάλεια Attáleia , also the name in ancient and Byzantine times) is a Turkish city on the Mediterranean . It is the capital of the fertile coastal plain in the south of Asia Minor, which has been known as Pamphylia since ancient times . Today the area is often called the Turkish Riviera because of the long sandy beaches . Antalya's old town is mostly located above a steep coast. The important seaport in the south of the city borders on Konyaaltı Beach.

The following important information is missing from this article or section:
Which cities are said to have been founded by Mycenaean Greeks and newly founded by Ionian Greeks? What evidence is there for this?
Help Wikipedia by researching and pasting it .

Pamphylia was founded in the 12th century BC. Probably settled by Mycenaean Greeks. The cities they founded became in the 7th century BC. Reorganized by the Ionian Greeks. They belonged to the Lydian and then to the Achaemenid Empire .

334 BC These cities were occupied by Alexander the Great.

According to ancient tradition, Antalya was founded in 159 or 158 BC. Founded by King Attalus II of Pergamon . It was named Attaleia after him .

From 133 BC His empire came to the Roman Empire by inheritance, but Pamphylia was divided into a multitude of dominions who turned to piracy. This was only 67 BC. Ended by Pompey .

As the most important port in the wider area, it was the travel destination of the biblical Apostle Paul in the 1st century AD, probably around the year 48 AD ( Acts 14.25 f.  EU ). A church, today's mosque Kesik Minare Camii, can only be documented from the 5th century. 130 Emperor Hadrian Attaleia visited, which is reminiscent of Hadrian's Arch.

In the Middle Ages, Antalya was often called Satalia in western sources, but still Attaleia in Greek sources. In Byzantine times, Antalya was an important Christian center and an important naval base. In order to be able to withstand Arab attacks, the city, which had had walls since Roman times, was re-fortified in the 8th century. In 860 an Arab army conquered the city when raids were carried out from Melitene and Tarsus. In the 11th century the city became the seat of an Orthodox bishop. During the crusades, the city became a stopover in many cases, and crusaders fled here in 1149. In 1085 the Turkish Seljuks succeeded in conquering the city, which only became Byzantine again in 1121 or 1137/42.

After the collapse of the Byzantine power after the 4th Crusade , the Templars were enfeoffed with the city by the Latins , which both the papal legate and Pope Innocent III. confirmed. The city was ruled by Aldobrandino. He was of Greco-Italian descent and is usually referred to in the sources as a privateer, as he did not succeed in founding his own dynasty. When Suleyman II , the Sultan of Rum , besieged the city, Aldobrandino turned to Cyprus for support. Walter von Montbéliard , son of Amé von Montfaucon, who came to the east with the 4th Crusade in 1199 and was regent for the underage King Hugo I , came to his aid with a larger force and was able to break the siege. As it turned out later, he had taken the money for it from the throne treasure of his ward without further inquiry. Walter seems to have made himself very quickly unpopular with the Greek population of the city, as they rose against him and called the Seljuks for help. Presumably Walter had tried to make himself ruler in place of Aldobrandino, as he was later to try in Rhodes , and, as a newcomer from France, had shown little sensitivity. The Sultan of Rum Kai Chosrau I entered Antalya in 1207. After his accession to the throne in 1210, Hugo I negotiated a trade agreement with Kai Chosrau I, which ensured the safety of Seljuk and Cypriot traders on the south coast of Anatolia .

The city came under Ottoman rule at the end of the 14th century, then finally in 1426 , but never got beyond the status of a country town until the middle of the 20th century. This was due to the relocation of trade routes to the Mediterranean, while the caravans barely touched the city. At the end of the First World War, Italy received pledges to gain territories in Turkey, which also affected Antalya. However, these claims became obsolete with the recognition of the Turkish Republic. 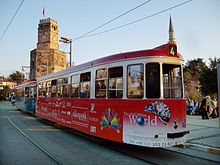 Antalya is the capital of the province of the same name , around half of whose inhabitants live in the city of Antalya. A city partnership with Nuremberg has existed since 1997 . In 1999 a tram was opened, the used T4 / B4 vehicles from Nuremberg. In 2009, after a year and a half of construction, another tram line was completed across the city, which, however, could only be put into operation late due to poor planning. A third tram line is currently being planned. More lines are to follow.

Today Antalya is the center of a rapidly growing tourist center on the Turkish Riviera that is visited by more than 2.5 million tourists annually. There are over 10,000 German permanent residents in the region, to whose care the parish of St. Nikolaus was founded by Prelate Rainer Korten in 2003 and a chapel was set up. In June 2009 Russian tourists overtook Germans for the first time as the largest tourist group in Antalya. "Olga overtakes Helga," was the headline of a Turkish newspaper at the time.

New industrial and commercial enterprises have settled in the well-developed regional city, often as offshoots of European companies. In the numerous new suburbs around Antalya, housing construction is being promoted according to modern standards. Almost every one of these settlements has a mosque and a shopping center as well as good transport links to the center.

The Antalya airport is the destination of many holiday flights. The tourist centers of Belek , Manavgat and Side in the east and Kemer in the south are in the immediate vicinity . In the city, the Antray, a modern tram network, is also operated as a public means of transport , which is constantly being expanded.

Until the 1950s, the city was only a medium-sized provincial town with less than 10 percent of today's population.

In the 2000s, in the course of several territorial and administrative reforms, large and z. Partly distant parts of the areas surrounding the city are summarized. This has led to a surge in the population. Antalya ranks 5th among cities in Turkey with 2,222,562 inhabitants. Of these, 1,122,997 are men and 1,099,565 women. Around 1.2 million people live in the inner city (closed development).

Only the smallest part of the urban fabric is of historical origin, as Antalya was only a rather small provincial town until the 1950s.

Antalya is the seat of the football club Antalyaspor , which is one of the regular members of the top Turkish league, the Süper Lig . In addition, the city is represented with the basketball club Antalya Büyükşehir Belediyespor (Antalya BB for short) in the highest Turkish basketball league, the Türkiye Basketbol Ligi . Furthermore, the Antalya Marathon , the second largest running event in Turkey , has been taking place in March since 2006 .

Due to the relatively pleasant climate, many football teams from Europe come to Antalya in the winter months to prepare for the second half of the season and to play friendly matches there under mostly good weather conditions. The suburb of Belek is very popular as a base . A soccer tournament has been held annually since 1999, with Turkish and European teams taking part in their training camp in Antalya. The tournament ran from 1999-2003 under the name Gazi Cup, 2003-2007 as Efes Pilsen Cup, 2007-2012 as Antalya Cup and since 2013 as Tuttor Cup.