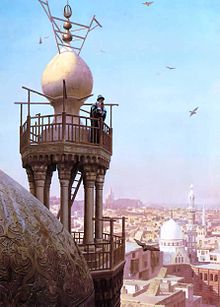 The muezzin ( Arabic مؤذّن mu'adhdhin , DMG muʾaḏḏin ) is a crier whocalls Muslims to prayer ( Salat , Arabic: as-salāt ). He calls the Muslim community to pray in the mosque five times a day at certain times. Only the call in the morning is at an indefinite time, namely when the sun rises. The Islamic call to prayer Adhan sounds in Arabic.

The muezzin is not a clergyman, but belongs to the mosque's staff. Its function is - u. a. because of the textual exclamation (or artfully decorated chant) - only partially comparable with the ringing of the church bell by the sacristan in Christianity . Depending on the circumstances, another believer can take on the function of a muezzin, for example if prayers are said during working hours.

The first person to take on the role of muezzin was the Abyssinian Bilal al-Habaschi , a freed slave and close confidante of the Prophet Mohammed . In the past, a blind man was often entrusted with this task, as he could not see places where women were staying from the minaret . The call was originally made from the minaret. In the meantime, the call is usually transmitted from another location via loudspeakers.

However, the muezzin also calls out when a person who lived in the immediate vicinity of the mosque has died.

In February 2017, Israel passed a law on "preventing noise from public speaker systems in houses of prayer" by the government. It is known as the Muezzin Law, which prohibits loudspeaker announcements in places of worship from 11pm to 7am. This affects the muezzin's first call in the morning at sunrise. Supporters oppose noise pollution and the alleged abuse of the loudspeakers for hate speech, while critics of the law see it as pure provocation. Israeli MP Ayman Odeh sees the law as “racist agitation against a national minority”.