The title of this article is ambiguous. Further meanings are listed under Küster (disambiguation) . 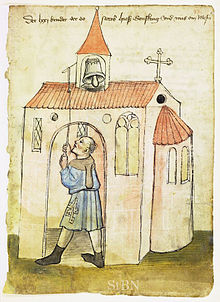 The sacristan, illustration in the house book of the Mendelsche Twelve Brothers Foundation , around 1425

A Sexton (from latin custos , custodians, guards '), also Beadle , Sacristan , Kirchner or Kirch Wart , in southern Germany area and in Austria Sacristan , Messner and in West Austria and in the Eastern Mesmer , Messmer (from the medium Latin mansionarius , house keeper') and in large parts of the German-speaking part of Switzerland, Sigrist (Protestant, from the Middle Latin sacrista 'sexton') is responsible for preparing the church and the sacristy for the service . The sexton service is often associated with the broader care of a church with the tasks of a caretaker (such as the administration, maintenance and cleaning of the building), church swiss and bell ringer as well as other liturgical services, technical or manual activities.

The service of the sexton is carried out full-time as well as part-time and on a voluntary basis. Salaried sextons have a church profession. The traditional service apartment is the sexton and the sexton .

In Protestant parishes in the Berlin and Brandenburg area, the job title Küster is used for the administrative staff and management assistant. The parish office, the information and contact point of the parish, is referred to here as the Küsterei.

The Old Testament reports on the group of Levites who served as helpers in the temple and synagogue. In early Christianity, deacons, in addition to their charitable tasks, also took on the office of maintaining church order in worship. They opened and closed the gates of the Church ( Ostiarians ), prepared the worship service, instructed the catechumens and sang the chants of the psalm. The ringing of bells was also part of the job of an Ostian. The ordination to the Ostiarier used to belong to the lower ordinations , the preliminary stages to the priestly ordination .

In Lutheranism, the sextons acted as praecentors of the congregation in the 16th and 17th centuries, especially in village churches without organs. In addition, the sexton or cantor chose the chants of the community until the beginning of the Enlightenment.

Up until the 19th century, sextons in northern Germany also usually worked as village teachers. He was called a sacrificial man or in Low German Offermann when he was also active as an organist . In northern Germany, the combination of the office of sexton and organist is also documented for the 16th to 19th centuries. In the past, sextons had to ring the church bells at the times set for worship and prayer ( angelus ) . To the 20th century operated in the 17th, the sexton in many rural areas, the sexton school . 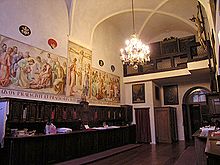 A clerk prepares worship before or after services does in the liturgy and in charge of the sacristy . The tasks of the opening and closing of the church, lighting the candles, plugging the song sheets, the ringing of bells and the preparation of include sacred vessels and equipment and the liturgical books , the concern for the church decorations, the vestments and the liturgical vestments , locally also the allocation or care of the acolytes .

Sextons also often take on caretaker services for the church , community center , rectory and other institutions that belong to the parish . Combinations with the duties of organist and choirmaster also occur, as well as serving at several neighboring churches in order to achieve an adequate income for full-time sextons and sacristans. The job requires regular presence at unusual times, on weekends and holidays. For a full-time job, training is usually required that includes liturgical, spiritual and church-organizational topics as well as practical and manual topics. Sextons and sacristans have joined together to form professional associations in both the Protestant and Catholic churches.