Community hall in the Reconciliation Church in Berlin-Biesdorf

A community center is a structure that serves various purposes for a local religious community . This can be a single building or an ensemble of buildings. Many community centers contain a worship room.

The term "community center" or (ecclesiastical) community center is commonly used e.g. B. for Christian , Jewish and Islamic institutions. The term “church center” is used in Christian communities, in the area of ​​the Catholic Church one often speaks of parish center , parish home or parish home . In Switzerland, such a building is also called a parish hall to distinguish it from the secular parish hall . 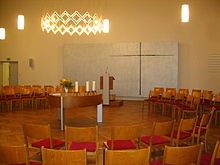 In Islam, the mosque , in Judaism, the synagogue, in addition to prayer, always has the function of a social meeting place. In the German-speaking area, these religious communities therefore also use the term “community center”. In several Islamic communities the name “Islamisches Gemeindezentrum e. V. "was chosen. In an analogous way, community center is also used as a term for Buddhist ( Wat ) and Hindu rooms.

A community center is often given a name, such as that of the pastor's patron (e.g. Marienheim ), a locally or generally known personality ( Pastor XY House ) or a biblical or religious term (e.g. Die Arche ). 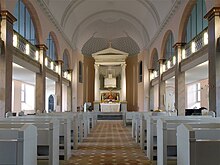 In parishes without a separate church , synagogue or mosque, a central room in the parish center serves as a place of worship , which is also permanently equipped for this purpose, in Christian parishes with an altar , lectern and organ . There are often variable solutions in which the worship room can be expanded to include neighboring rooms by sliding walls or kept open for multiple use. The inclusion of a worship room in the community center can be permanent or - for example in new building or diaspora areas - represent an interim solution up to the construction of a church . Even with an existing church, the service room can retain its function on special occasions, for example for use as a winter church . In many places in Islamic communities there are backyard mosques with a bedside room and meeting room, often as a preliminary stage for a mosque. Jewish and Islamic places of worship have separate prayer rooms for women and the places for the prescribed ritual ablutions.

An essential function of the community center is that of a meeting room for community meetings, religious instruction, adult education , cultural events, senior encounters, youth work, for gatherings of groups and associations , for rehearsals by church choirs and other music groups, for parties and celebrations. The space program is tailored to the size of the community. In addition to a large community room (community hall, ballroom, Catholic: "parish hall") there are usually several smaller group rooms and the corresponding functional rooms, such as a kitchen. In recent decades, for reasons of cost, the municipalities have often switched to renting out the rooms to groups that do not belong to the municipality or for private events.

Other community facilities can be integrated into the community center , such as a community office, day-care center , library , educational institutions, soup kitchen or service apartments for pastors and employees, in Judaism also a mikveh .

In small parishes there was and is only one parish room in many places, for example on the ground floor of the rectory .

The emergence of Christian community centers since the 19th century can be understood as a “building conceptual response to the differentiation of popular church structures into group-specific forms” in times of developing associations , where community members are to be brought together beyond the church services.

After the Second World War, a large number of new Protestant church buildings were built in Germany according to plans by the architect Otto Bartning , including a number of community centers . In the new development areas built later, no classic church buildings were built, but instead - “as an expression of community theology open to the world and everyday life” - multifunctional community centers, dispensing with the “urban model of the church”. These building complexes are nevertheless sometimes referred to as churches (e.g. Reconciliation Church in Berlin-Biesdorf). From around 1980, a clearer accentuation of a “ sacred cell as the center reserved for worship ” can be observed in the Protestant sector .

From 1988, a parish hall complex was built into the church in the Gustav Adolf Memorial Church in Nuremberg. In the 21st century, there was an increasing tendency to convert church buildings that were no longer (fully) used into community rooms. In Protestant churches, a spacious gallery was occasionally used to install the parish room, below or on the gallery.