View into a cathedral sacristy - on the sideboard are paraments for four concelebrants . 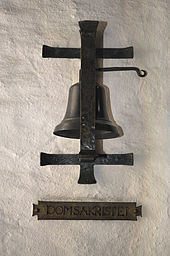 Entrance to the cathedral sacristy in Speyer Cathedral

In particular, the sacristy is used by priests , deacons , lecturers and acolytes as a preparation room for church services. The sacristy is usually looked after by the sexton , who is therefore sometimes also called the sacristan . Occasionally there is a second sacristy in Catholic churches, which is intended for the altar boys. A sacristy prayer is a prayer spoken before the service, usually in the sacristy. It serves for the spiritual preparation of the priest and the liturgical services.

The term comes from the Middle Latin sacristia (from Latin sacer , "holy"; to sacrista "monk who is responsible for the abbey church", "sexton"; Middle High German loan word sacristīe ). An old German name for the sacristy is the Garwehaus (from gar, garven = to make up, to lay out), from which the name Gerkammer was derived. The Germanized form Sagrer is also attested in the early 15th century .

The equipment of a sacristy includes cupboards for storing the liturgical vestments and other equipment, in Catholic churches there is usually one provided as a sideboard on which the vestments of the priests are laid out. A safe for storing precious liturgical vessels, a wash basin and other work tables for arranging floral decorations etc. are also common. Sometimes the sacristy is followed by a storage room, which is used to store items that are rarely used; in very large churches there is sometimes a separate room for storing the paraments . Most also located Sacrarium in the sacristy. In the Middle Ages and early modern times, sacristies sometimes also served as archive rooms .

In the Eastern Churches , the sanctuary, which is separated from the rest of the church by the iconostasis, generally serves this purpose; there is also the Diakonikon in larger churches and cathedrals. In the early Christian, Byzantine church architecture, this corresponds to the pastophorion .